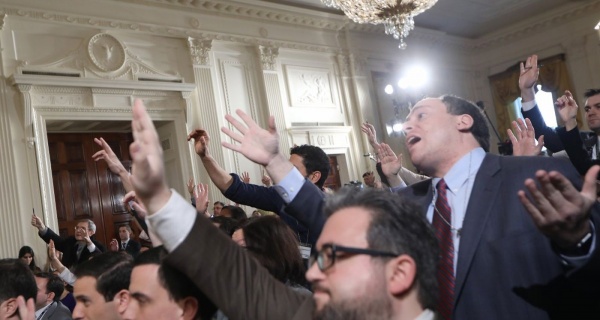 If the Jim-Acosta-as-First-Amendment-hero subplot is the only thing we remember about President Trump’s uniquely bizarre, incoherent and at times surreal post-midterm-election press conference, well, that’s a shame.

There was another moment from that Trumpian spectacle that was just as revealing and damning as the Acosta press-pass scandal, one that was soon swept under the wave of the next news cycle. Future historians should study this moment as they make sense of the Trump years. Here it is, verbatim, taken from the 17,000-word transcript of the press conference:

Mr. President, first off, I personally think it’s very good to have you here because a free press and this type of engagement —

“Earned media” is a fancy way of saying free publicity. It’s when major TV networks, newspapers, magazines and other outlets cover you instead of you paying them to get your message out. If the past two-and-a-half years have taught us anything, it’s that Trump is a master of earned media. By one count, he received $5.6 billion of it during the 2016 campaign — more than the combined spending of every other candidate who ran for president that year.

Trump gets the media. He may be one of the most ill-suited, unprepared and temperamentally unfit individuals to ever serve as president. But he knows what makes the media run, what drives ratings and what gets clicks. After all, the guy was born, raised and cut his teeth in the heyday of the New York media wars. When it comes to dealing with journalists, courting and cajoling, flattering and outright lying to them, he’s been at this game for nearly half a century.

Yet we, in the media, still haven’t figured him out.

Despite being the furthest thing from a normal president — with his Twitter rants and his flouting of the Constitution, his flirting with white nationalists and declaring journalists the “enemy of the people” — we cover him mostly in the same way we did back in June 2015, when he first descended that escalator and declared his intention to run for president, or when he swore an oath and became president on January 20th, 2017.

Reading all 17,000 words of the transcript of Trump’s post-election press conference was a depressing exercise. It confirmed, among other things, just how much he feeds off of us. If Trump really is our first reality-show president, then the media is one of The Trump Show‘s most reliable characters, a recurring villain from season to season. To Trump, Jim Acosta is just another Omarosa, the convenient foil who riles up the loyal viewers and adds some conflict.

Lost in the furor over Acosta’s brief ban was his actual question. It was about the “caravan” and why Trump had used it to demonize immigrants before the election. Fair enough, though kind of obvious. It’s a question that would have carried more weight if CNN hadn’t spent hours covering that ginned-up controversy, though with less zeal than the Washington Post or the New York Times. And it would be easier to take Acosta’s brand of righteous indignation more seriously if CNN hadn’t proceeded to cover his brawl with Trump as yet another round of BREAKING NEWS, milking it for even more ratings.

The most revealing question of that press conference came from PBS NewsHour’s Yamiche Alcindor. She asked Trump about his embrace of the term “nationalist” and how that has emboldened white nationalists. This was the rare kind of earned media Trump couldn’t abide:

[ALCINDOR]: There are some people that say that now the Republican Party is seen as supporting white nationalists because of your rhetoric. What do you make of that?

Honestly, I mean, I know you have it written down, and you’re going to tell me. Let me tell you: It’s a racist question…But to say that — what you said is so insulting to me. It’s a very terrible thing that you said.

We — and I include myself here — need to ask more of these questions, unambiguous, proactive and not reactive, driving at the underlying racism and xenophobia of Trump and Trumpism. And if Trump refuses to answer, as he did with Alcindor, we continue to press him until he answers. We could even take a cue from the Dutch media’s grilling of U.S. ambassador Pete Hoekstra. At one of his first official appearances, Hoekstra was questioned about past claims he’d made about the “Islam movement” in the Netherlands and “politicians that are being burned.” When Hoekstra at first ducked the question, one journalist after another asked a version of it, relentless in their demand for answers. Eventually, Hoekstra relented. “Looking back, I am shocked I said that,” he told De Telegraaf. “It was a wrong statement. It was wrong.”

And if that doesn’t work, what if the White House press corps simply boycotted Trump’s press conferences the next time someone’s credentials get revoked? Or what about re-assigning some of those White House reporters to, I don’t know, any other part of the Trump administration? God knows what mayhem Ben Carson is causing over at HUD these days.

Trump lives for the reaction and craves the controversy. Attention is his oxygen, and free media is the purest form of it. The flip side of that, as NBC News’ Benjy Sarlin put it, is that “He always looks smaller when he isn’t getting a reaction.” We obviously can’t ignore him. He’s the president, the commander-in-chief, and one of the biggest threats to global peace abroad and the Constitution and rule of law at home. But what about being more selective in how much of his antics and outbursts we reflexively cover and the amount of attention we give him?

Which gets us to this: We need him as much as he needs us. When Trump talks about how good his presidency has been for ratings and the media business, he’s right. Remember what former CBS executive Les Moonves said about Trump’s run in 2016: “It may not be good for America, but it’s damn good for CBS.” The post-election “Trump bump” for news organizations was real, and his presidency continues to drive sky-high ratings and easy web traffic. Why else would CNN and MSNBC cover him all day long, a never-ending BREAKING NEWS presidency?

We didn’t figure him out in 2016. We hardly stopped to assess our performance and rethink our approach for 2017. Trump’s post-midterm press conference was a reminder that he’s still doing it and taunting us while he does it: It’s called “earned media.” It’s worth billions. Go ahead.

There are 705 days until the next election. It’s not too late to pause and consider whether there’s another way, a better way, to cover this president without giving him what he wants.