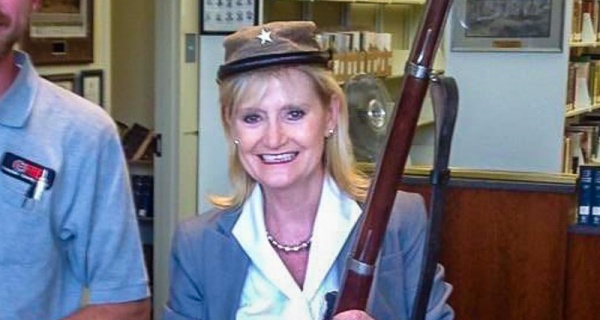 A photo of Mississippi Sen. Cindy Hyde-Smith (R) wearing Confederate garb surfaced this week just days after she said she would attend a “public hanging” if invited.

According to Politico, the photo was taken when Smith visited the Jefferson Davis Home and Presidential Library in 2014. Davis served as president of the Confederacy during the Civil War.
In the photo posted to Facebook, Hyde-Smith holds a rifle and is wearing a Confederate States Army soldier’s hat.

“I enjoyed my tour of Beauvoir. The Jefferson Davis Home and Presidential Library located in Biloxi,” she wrote in her Facebook post. “This is a must see. Currently on display are artifacts connected to the daily life of the Confederate Soldier including weapons. Mississippi history at its best!”

Revelations of the photo come after Hyde-Smith was caught on camera telling Mississippi Gov. Phil Bryant (R) that she would attend a public hanging if he invited her. Mississippi has a history of lynching African-Americans.