The Myth Of The So-Called Trump Economy 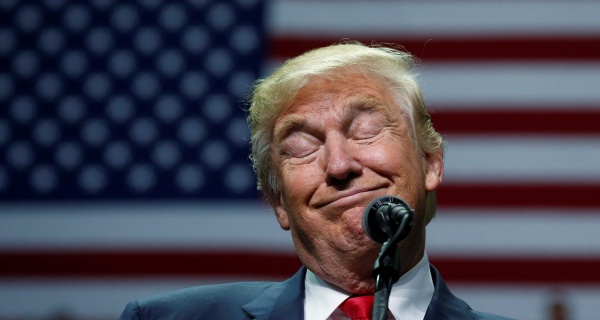 With unemployment near record lows, Donald Trump deserves substantial credit for the strength of the economy, right?

This is a common refrain — and not just from Trump’s allies. Many in the media point to the economy as a sign of Trump’s strength, though these claims are often vague and unsupported.

And the voters seem to believe it, too, despite the GOP’s poor performance in the 2018 midterm elections. According to new polling from Pew Research Center, the American public largely prefers Democrats’ positions and views on national issues to Trump’s views — except when it comes to jobs and the economy.

But there’s a big problem with crediting the president with the success of the “Trump economy” — and it’s that there’s no such thing.

Critics of the president often argue, when this topic comes up, that the success of the Trump economy is actually the success of the Obama economy. President Barack Obama pulled us out of the Great Recession and put us on a path of steady job growth, they say, which has mostly continued apace under Trump.

There’s some truth in this reply, but it concedes too much. There’s no more an “Obama economy” than there is a “Trump economy.” And despite their frequent abuse of these terms, many members of the media know this.

The Times dutifully noted that Sanders’ numbers were off and that her representation of African-American employment trends under Obama was incorrect.

But the Times’ entire fact-check completely neglects to mention the fact that, even if Sanders’ employment data were correct, her statement would be wildly and ridiculously false because she says that Trump personally created 700,000 jobs for African Americans.

Republicans used to acknowledge this. They used to say explicitly, “Government does not create jobs.” Now they say, without a hint of irony, not only does government create jobs, but Trump himself is personally responsible for every job created in the country.

The “government does not create jobs” line was always to strong a position to take and clearly false. But the larger point is that most jobs exist in the private sector and the business cycle of booms and busts is driven by a range of conditions distinct from government and party control in the White House.

Of course, the government does take steps to manage the economy. The Federal Reserve plays the largest direct role in this on a day-to-day basis, and the president appoints its leadership on a staggered schedule (though Trump, interestingly, currently despises his own Fed chair’s policies!). Congress also passes laws that have significant impacts on the economy, such as the taxing, spending, and various forms of regulations. The administration implements those laws with various levels of discretion, and the president can veto laws and drive the legislative agenda, but the executive’s role is largely downstream from Congress.

But much of these laws are already in place, and the president doesn’t often have a massive role in directing the trajectory of the economy. Often, not blowing good economic conditions by doing something extremely reckless, will suffice.

In extreme circumstances, the government can play a crucial role. Evidence suggests, for example, that the 2009 stimulus package, passed under Obama and with his direction, did significantly help the economy pull out of the doldrums. Though, as economist Paul Krugman argued, it probably should have been much larger.

Events like this can lend credence to the view that Obama “deserved credit” for the success of the economy under his watch. But if we want to make such a claim, we have to answer certain counterfactual questions. Were the steps taken necessary to achieve the ends? Would anyone else have taken the same steps? And if the economy does poorly, was there anything a reasonable leader could have done to have improved it?

This is how we should think of the president’s effect on the economy — relative to the baseline of what we can and should expect, given the current conditions. But assessing that is much more complicated than simply looking at what the unemployment rate happens to be.

For example, under Trump, we’ve seen the GOP pass a massive tax bill that gave away billions of dollars a year to corporations and the wealthy — and will add an estimated $1.5 trillion to the deficit over ten years. Some argue it’s hard a mildly stimulative effect on the economy, though its effects are debatable.

But what is clear is that it wasn’t necessary for the job growth we’ve seen. Average monthly job growth has been slightly lower, the overall on pace since Trump took office. And while there’s little reason to think the deficit is a burden on the country right now, it could become an impediment in the future, especially because Republicans have already proven that they’re will use fears about government debt as an excuse for doing nothing in the face of financial calamity.

Trump and his allies have also pushed for weakening financial industry regulation under his watch. And this kind of move points to another reason why judging the “Trump economy” is so perilous. Weakening financial regulations can, in the short run, make the economy run hotter. But it also increases the long-term risks of serious financial downturns, which isn’t taken into account in the current data.

The myth of the “Trump economy” will almost certainly persist, though, because it’s an easy talking point for his defenders (until a recession hits) and a lazy argument to make as a political pundit. Some of this myth-making is self-reinforcing as well because pundits insist that the economy will benefit the president because people will give him credit, an idea that is often conflated with the idea that they are correct in giving him this credit.

It shouldn’t, though, be the political commentator’s job to tell the people how they will react to a series of events. Instead, commentators should provide analysis and insight of politics and economics so the people have a better idea of how they should react. This is, unfortunately, much harder, because it often involves weighing complex situations and, sometimes, admitting what we don’t know. So much of the time, pundits lazily fall back into spouting and amplifying nonsensical myths.