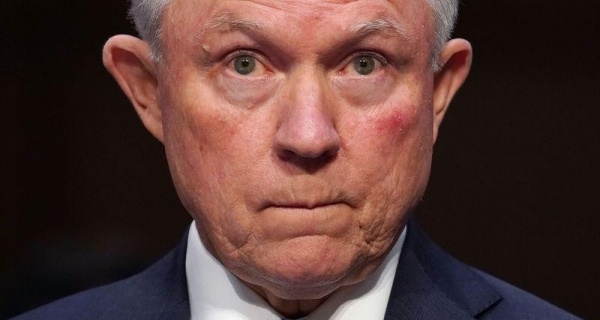 Jeff Sessions hides emotion poorly—his face is reflexively expressive—and last Wednesday night, it betrayed a mixed set of sentiments as he stepped out of the Robert F. Kennedy Department of Justice Building in downtown Washington, D.C. He had the stunned appearance of a hostage emerging out of an underground prison for the first time in months. But for a moment, in the news-camera glare, another look flashed across his face: the impish grin of a man who knows he'd managed to leave a little surprise behind.

Earlier that day, Sessions had resigned as the head of the Department of Justice (DOJ) at the request of President Donald Trump. But before he left the job, the soon-to-be former attorney general had some last-minute business to attend to. With a black-ink pen, he initialed, in an illegible scrawl, a document formalizing the terms of what will be one of his abiding legacies: a DOJ disengaged from its role in investigating and reforming police departments that repeatedly violate the civil rights of the people they're sworn to protect. Police reform had been a DOJ priority during the Obama administration, and that work played a significant role in the federal response to the deaths of black men at the hands of police in cities such as Ferguson, Missouri.

Sessions, however, had long opposed the federal police oversight and the consent decrees—long-term reform plans supervised and enforced by a federal judge—that defined DOJ's approach during the Obama years. In his view, they undermine law enforcement and amount to improper federal meddling in state and local affairs. (This summer, I documented the human consequences of the dramatic extent to which Sessions and his deputies had scaled back federal police oversight.)

The seven-page memorandum Sessions initialed last week caught Department of Justice officials by surprise, and many of them are still puzzling through what it will mean in practice. "People aren't happy that this came out with no notice and no discussion," one DOJ official said. "What does this really mean day-to-day? Nobody's really sure because they weren't included in the conversation."

The memo places significant hurdles in the way of DOJ entering into consent decrees with state and city governments. It mandates closer control by the Department of Justice's most senior political appointees, requires sunset dates for consent decrees, and limits what the DOJ can require of state and city agencies.

And there was a broader significance that passed largely unnoticed in the press coverage of Sessions' memo: Current and former Department of Justice officials note that the new policy also applies to other areas of the department's work, such as efforts to curb pollution. They worry its effects will be most profound and far-reaching in those realms.

That's in large part because, as I reported earlier this year, Sessions had already succeeded in all but halting DOJ's police-reform work. He wrote, in a 2017 department memo, that "it is not the responsibility of the federal government to manage non-federal law enforcement agencies," and followed it up with an op-ed in USA Today further expressing his opposition to consent decrees.

Although most vocal about police reform, Sessions believed consent decrees with state and city governments in general constitute federal overreach. Within the Department of Justice "everybody knew consent decrees were disfavored," one department official put it. "I don't know of anybody working on cases in the Civil Rights Division that thought, 'We'll get a consent decree,' and now are thinking, 'Oh no, now we won't get to do it.'" Indeed in areas of civil rights enforcement such as fair housing and disability rights cases, the DOJ has also largely abandoned judicially administered consent decrees in favor of out-of-court settlements. In that sense, last week's memo amounts to Sessions, on his way out the door, seizing a kind of dead-hand control over the department the president has wrested away from him.

But in at least two respects, Sessions' memo does far more than merely memorialize the status quo. The DOJ had continued to rely on consent decrees in certain areas, like environmental protection and voting rights. As recently as a week before the mid-term elections, the Department of Justice's environmental unit filed a consent decree with Ironwood, a small town on Michigan's Upper Peninsula, over clean-up of a shuttered gas plant that was leaching coal tar and other waste into the groundwater and the nearby Montreal River. In the past year, voting rights attorneys have entered consent decrees to fix absentee-voting procedures in Wisconsin and Arizona and to improve voter roll maintenance in New York City. Attorneys handling civil rights and environmental law cases fear last week's memo may take these types of consent decrees off the table. (A spokesperson for the DOJ did not immediately reply to a request for comment.)

The second concern cited by current and former Department of Justice officials is the message Sessions' parting memo sends to states and cities already subject to consent decrees. "I don't think you can overstate the chilling effect of this memo on the enforcement of existing consent decrees," said Christy Lopez, who supervised attorneys handling police-reform cases for most of the Obama administration.

Career civil rights attorneys at the DOJ already felt hesitant to push back against recalcitrant state and city officials for fear that their superiors wouldn't side with them. Last week's memo makes that lack of support—already obvious internally at the DOJ—a matter of official policy. "Now the DOJ's position is public; the states all know," one Department of Justice official said. "This gives the states more leverage. Why would you do that—lay out to the people you're regulating, your adversaries, the limits of your negotiating power?"

One example former DOJ officials point to is Ferguson, a city that became a flashpoint for the national dialogue over policing after a white officer in 2014 shot and killed Michael Brown, an unarmed black resident. The police force there has been subject to a wide-ranging consent decree since 2016, but, according to court records and complaints from local advocacy groups, it has been slow to implement many of the required changes, like dismissing illegal warrants issued prior to the consent decree. "The DOJ just isn't pushing back," one former Department of Justice official said, and Sessions' memo only makes it harder for DOJ attorneys to resist intransigence.

"They have no leverage," the former official said. "This memo is just a clear signal to the whole world that these DOJ lawyers have no power, and they won't be allowed to do anything meaningful. That's a huge blow."