The Brutal Lesson Of The Californian Wild Fires 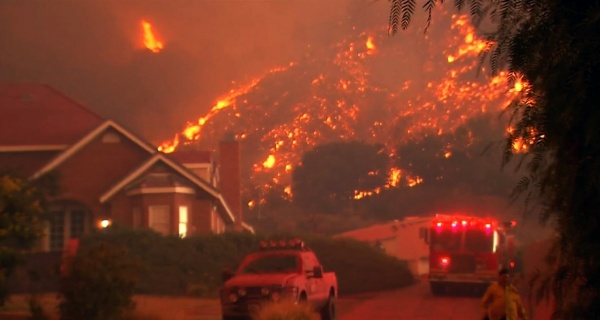 California is burning, again. Dozens of peoples have been killed and thousands of buildings destroyed in several fires, the most destructive in the state’s history.

The California fires are just the most recent in a series of major wildfires, including fires in Greece in July this year that killed 99 people, Portugal and Chile in 2017, and Australia.

Why do wildfires seem to be escalating? Despite president Donald Trump’s tweet that the California fires were caused by “gross mismanagement” of forests, the answer is more complex, nuanced, and alarming.

Donald J. Trump
?
@realDonaldTrump
There is no reason for these massive, deadly and costly forest fires in California except that forest management is so poor. Billions of dollars are given each year, with so many lives lost, all because of gross mismanagement of the forests. Remedy now, or no more Fed payments!

What caused the California fires?

The current California fires reflect a complex mix of climate, social, and ecological factors. Fuels across California are currently highly combustible due to a prolonged drought and associated low humidity and high air temperatures. Indeed, it is so dry fires burn freely through the night. Such extreme weather conditions have the fingerprints of climate change.

Compounding the desiccated fuels are the seasonally predictable strong desert winds (the Diablo and Santa Ana) that help fires spread rapidly towards the coast.

Low-density housing embedded in flammable vegetation has created an ideal fuel mix for these destructive fires. Having people scattered across the landscape ensures a steady source of ignitions, ranging from powerline faults to carelessness and arson, making fires a near certainty when dangerous weather conditions arise.

Decades of wildfire suppression have created fuel loads that sustain intense fires. That these fuels are burning in late autumn is even more alarming. Under severe fire weather, forest fires can engulf entire communities, with fires spreading from house to house, and human communities turning into a unique wildfire “fuel”. Suburbs can burn at the rate of one house per minute.

The standard response to wildfires is to fight them aggressively, using a military-style approach involving small armies of firefighters combined with aircraft that spread fire retardant and saturate fire-fronts with water. Such approaches are extraordinarily costly. Annual spending on firefighting has been steadily rising. In the US, annual fire-fighting costs now exceed several billion dollars, with individual fire campaigns costing ten to over a hundred million dollars.

Although industrial fire-fighting approaches currently enjoy political and social support, the strategy is economically unsustainable. And they are impotent in the face of climate change driven fire disasters such as those currently occurring in California.

Across the fire science community, there is growing recognition this “total war” on fire approach has failed. The key to sustainable co-existence with flammable landscapes is instead managing fuels around settlements and stopping wildfires from starting in the first place.

Spain and Portugal are good examples of why this is so important. In these Mediterranean lands, humans have sustainably co-existed with flammable landscapes for thousands of year. However, the near ubiquitous depopulation of rural lands following the second world war has led to the proliferation of flammable vegetation that had previously been held in check by intensive small-scale subsistence agriculture.

With the loss of this traditional agriculture Mediterranean countries are now experiencing regular fire disasters (such as the 2018 Greek fires and the 2017 Portuguese and Spanish fires). These are equivalent to fires in more recently settled flammable landscapes in the Americas and Australia.

This seems to be the story in most flammable landscapes on earth: the removal of traditional landscape management by colonization and globalization has combined with climate change to turn these landscapes into tinderboxes.

But just as it is unrealistic for Australia to faithfully restore Indigenous fire management practices, expecting a return to historical practices in the Mediterranean is not realistic. There is little economic or social reason for people to return to traditional rural lifestyles, and the gravitational pull of the social and economic advantages in urban areas is too great to stem rural depopulation.

But we can adapt traditional practices to help us live with fire. In the Mediterranean, people are already experimenting with different ways to manage landscapes, such as managing forests for cork and bioenergy, combined with prescribed burning and grazing.

This can create picturesque landscapes that are fire-resistant and easy to defend. Similarly, in Australia, the Victorian government has created parkland-like green fire breaks that were used for backburning operations to protect communities during 2009 Black Saturday wildfires.

The Hobart City Council is planning to use similar fire breaks to protect its outer suburbs with dense bushland. Such management could be used on a larger scale to substantially reduce fire risk. The challenge for landscape fuel management is providing financial and regulatory incentives for citizens and local communities to reduce fuel.

Currently, no society is sustainably co-existing with wildfire. Globally, the situation will worsen under a rapidly-warming climate with ballooning firefighting costs and huge loss of life and destruction of property. This is the bitter lesson of the Californian fires.