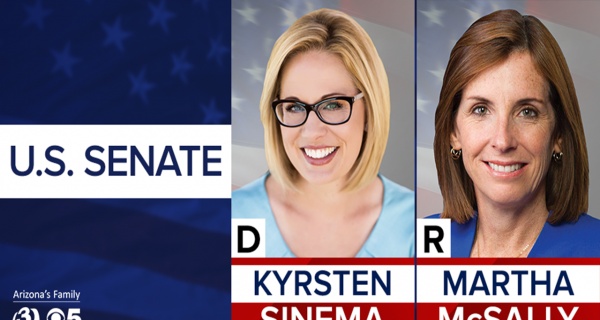 Suspense and uncertainty now hang over the supertight U.S. Senate race, which has Democrat Kyrsten Sinema and Republican candidate Martha McSally separated by just 9,610 votes, according to updated election results.

The results were updated after 5 p.m. Thursday, the first time since election night that the tallies had been substantially updated.

It's too soon to know who will ultimately prevail.

With tens of thousands of outstanding ballots, the campaign managers for both teams conveyed confidence, with each saying the remaining ballots would favor their candidate.

"With half a million ballots left to count we remain confident that as votes continue to come in from counties across the state, Martha McSally will be elected Arizona's next Senator," Bognet said in the statement.

Sinema and McSally are no strangers to the drama surrounding extended vote counts.

It was election night 2012, and Sinema was sequestered in a hotel room with a dozen or so supporters, friends and campaign staffers in a makeshift war room.

It was her first bid for Congress and her campaign didn't have the money to splurge on a business suite. The bed ate up most of the floor space, strewn with papers, charging cords and laptop computers.

The early election results dropped at 8 p.m. that election night six years ago. She was ahead of Republican challenger Vernon Parker, just not as much as she had hoped to be in the race for Arizona's 9th Congressional District, a newly created seat evenly divided between Republicans and Democrats.

Sinema buzzed with nervous energy and settled in for a roller-coaster week.

Her lead began to grow over the course of the few days, as the Maricopa County Recorder's counting of so-called late early ballots began to post, recalled her former campaign manager, Rodd McLeod.

As she awaited the final results, Sinema threw a party for the volunteers and staff who worked on her campaign and worked the phones, thanking donors and supporters.

"She understands there's a big job to do counting these ballots," McLeod said. "You're still working, and you're observing the ballot count, but you're waiting. You're letting people know you appreciate their hard work."

On the Friday after Election Day, she got a concession call from her GOP rival.

The candidates and their Democratic and Republican allies have built out sophisticated models that analyze the geography of outstanding ballots, past voting behaviors, and voters' party affiliations.

But they are riding the same emotional roller-coaster as the estimated 2.3 million voters who will have decided the race.

And then there are the legal challenges, which could prolong the result for weeks as either side works to disqualify or add voters to the rolls in the event the final margin reaches below 5,000 or so.

Already, Republicans were in court Thursday to dispute a practice used by certain counties to verify mismatched signatures of early ballots.

About 90 minutes before state elections officials were scheduled to post an updated ballot tally, Sinema's campaign manager, Andrew Piatt, sought to manage the public's expectations about Thursday's posting. In a statement, he predicted if all votes are counted, Sinema will be the next senator.

"Arizonans must have faith that their votes are counted, and we are working diligently to ensure that count proceeds in a fair, transparent, and timely manner that voters can trust, Piatt wrote in a statement. "To that end, we have spent the hours since the polls closed tracking down ballots and know there are more than 600,000 left to be counted across the state.

"We also know that when the Maricopa County Recorder releases its first batch of ballots this evening, there will still be approximately half a million votes left to count," Platt continued. "Once they are counted, we are confident that Kyrsten Sinema will be the next Senator for the state of Arizona.”

McSally, a former U.S. Air Force combat pilot, has also been here before.

In 2012, she lost a primary election against former Marine Jesse Kelly to run in a special election to fill the remaining months of former Rep. Gabrielle Giffords' term in Congress.

Two years later, she edged out Democratic Rep. Ron Barber by only 167 votes to win the Tucson-based 2nd Congressional District — but only after a recount and legal fights, which she has frequently talked about on the campaign trail in her race for the Senate.

That race, like the Senate race, was a key battleground for outside spending groups and blistering attack ads against both candidates.