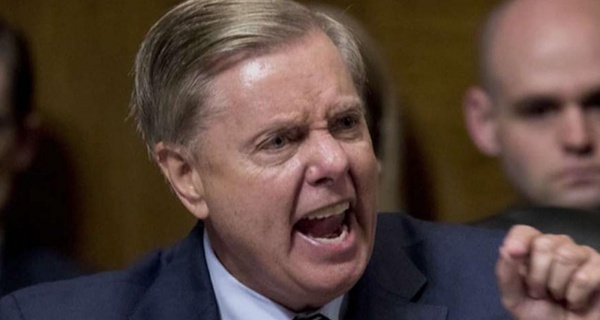 On Wednesday, in what has been discussed as a calculated move from President Donald Trump, Attorney General Jeff Sessions was fired.

During his afternoon show, CNN’s Jake Tapper played a clip of Senator Lindsey Graham (R-SC), reacting to the news. Even though Graham appeared to have a positive attitude, Tapper called him out on his flip-flop position towards Trump and Sessions’ relationship.

“He once said that Trump would have holy hell to pay if he ever fired Sessions,” Tapper said.

In response to the news, Graham said that he is “looking forward and not backward,” and that there would be a fresh start at The Department of Justice.

Contributor Bakari Sellers, who served with Graham in the state legislature in South Carolina, said that Graham was acting very “weak-kneed” and that he did not recognize who Graham was anymore.

“I don’t know who Lindsey Graham is anymore,” Sellers said.

“He’s always been afraid of his shadow somewhat. I think he’s the prime example of when Donald Trump breaks an individual. Now Lindsey Graham is very weak-kneed. He is no longer putting the country first, but putting his party first,” Sellers said.