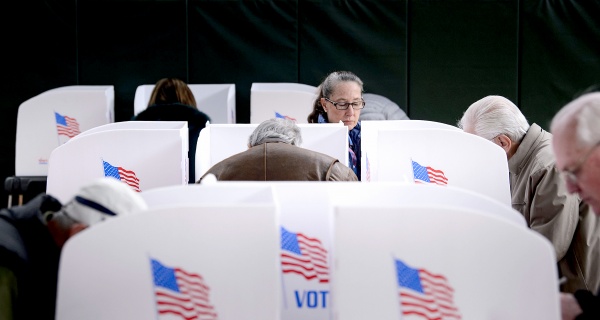 Many voters went into the midterm elections planning to side with their political tribes. But across almost 100 House and Senate polls that The New York Times conducted this fall, about 10 percent of voters — more than enough to tilt many contests in either direction — said they were undecided, even in the final stretch of the campaign.

This week, we talked to more than two dozen of them to learn if they had since decided, and how.

Nearly all of them had been reaching for some criteria other than pure partisanship. Six said they usually voted Republican, or had done so all their adult lives, but chose to abandon their party’s candidates this fall. Some said they wanted a divided government as a check on President Trump. Others said he needed freedom to keep pushing his policies.

The group is not representative of all voters, or even all previously undecided voters. But their words show how it’s possible, even in such partisan times, to remain on the fence. This is what 10 of them told us.

Ms. Boykevisch usually votes Republican, but the decision was harder this time because “nobody really seems to want to tell you the truth; they’re just busy bad-mouthing the other candidate,” she said. “I feel like it’s gotten worse in the last couple of years.”

In the end, she chose the Republican candidate because she felt the Democrat, Perry Gershon, ran an anti-Trump campaign. “It seems like he would start more fights and more disharmony,” she said. “He’s ready to go after President Trump, and I don’t think President Trump is that much of a bad guy. He’s trying to fix things.”

Ms. Hawkins had been a Republican. “No longer,” she said. “I’m actually becoming more emphatic as the days go by. The Republican Party is just coming across as people who really don’t care about the country.” Part of her choice is personal: She immigrated to the United States four decades ago from South Africa and is concerned about Republican immigration policies.

Her Republican congressman, Lee Zeldin, also supported the tax bill, which she believes won’t help her community. “He said, ‘I’m going to fight for you, I’m going to fight for New York,’ and at the end of the day, he did nothing,” she said. She still has the email he sent to constituents explaining his vote for the bill. “Because I was angry,” she said, “I kept it.”

Mr. Vidovich, a registered Democrat, called the office of the Republican congressman Ted Budd to ask if he would publicly pledge to oppose any health care legislation threatening protections for pre-existing conditions. “His office said he had not made that public declaration,” Mr. Vidovich said. “Once I discovered that — and plus, he seems to be more of a supporter of Trump than I am — those two things declared for me I’m not voting for him.”

Last week he voted early for Mr. Budd’s Democratic challenger, Kathy Manning. The older he gets, Mr. Vidovich said, the more time he has to be analytical about his choices. “I keep hearing that older people are set in their ways and they don’t change,” he said. “I don’t think that’s exactly right.”

Mr. Ricci’s biggest issues are health care and immigration, and he didn’t like where the Democratic candidate stood on those. “I don’t think we need any more socialists going on than we already have,” he said. “That’s why these people are coming here from all over the world, to take advantage of us. The only problem with that is, who’s picking up the bill?”

He’d like to see the House stay Republican. Of the president, he said, “I think he’s been doing a pretty good job, considering nobody’s been giving him any help.” He doesn’t trust newspapers, and gets his political information mostly from Fox News and CNN. “I like to hear both sides of the story because if you hear both sides, then somewhere in the middle is where the truth is,” he said.

Ms. Sanchez, a lifelong Republican, says she has given up on her party. “I switched when the Looney Tunes took over,” she said. “They lost control, so from now on, I’m just going to be voting Democrat and see where the chips fall, you know?”

She is voting for Kathy Manning largely as a rejection of President Trump. “It’s the fact that you have someone in charge that cannot take responsibility for his actions -- he likes to blame everyone else,” she said. “She’s a Democrat and I don’t want no more Republicans in charge.”

Ms. Arjona describes herself as a moderate, a Christian and “a pro-life feminist,” and has voted for both parties in the past. But this election cycle, she said, she dreams of a Democratic House. “I think I woke up in a nightmare,” she said of the current administration.

“Health care costs are so crazy high right now, I’m having to pay for my husband and my family and it’s just an outrageous cost, and that’s one of the things that she’s been talking about,” she said of the Democratic candidate. Her children are half Filipino, and she worries about immigration policy and prejudice. “I still think having rights for all people is important,” she said.

Ms. Arjona made up her mind by talking to friends who were voting Democratic: “I have a few friends I trust, and they gave me the reasons why, side by side on issues.”

Ms. Nicosia, who considers herself an independent, fears that if Democrats take control of the House, Washington will become even more chaotic. She’s pleased with many of the president’s policies, including the revised trade deal with Canada and Mexico, and the current economy: “Even though it might not seem like it, I think there’s a better feeling of well-being among many people.”

The ferocity of opposition to the president alarms her. “A lot of people that I’ve talked to will say, ‘Oh, I’m so fearful,’ ” she said. “I don’t see that there’s anything to be fearful of.” This week, she was dismayed by the pitched reactions to Mr. Trump’s visit to Pittsburgh after the mass shooting there. “When they talk about him being a nationalist — and now they’re talking about him being a white nationalist — I don’t think that’s true,” she said.

Last Sunday, Mr. Smith sat down to study his choice between the Democrat Ron DiNicola and the Republican Mike Kelly. No Fox News or CNN sources for him, he said. “They’re not very neutral all the time,” he said. On the nonpartisan website Votesmart.org, he read speeches from each candidate and checked their voting records and ratings from interest groups, with an eye for their support of gun rights and low taxes.

“I’m a research-based person in life,” said Mr. Smith, a registered independent and father of five. “I don’t go out and buy a vacuum cleaner without research. That’s what I do. That’s how my brain works.”

Mr. Maryanoff thinks of himself as an independent, although he’s a registered Democrat — so “I could get a piece of the primary action.” He’s a well-informed voter, too: He knows by heart the districts he’s voting in for state races (House District 29, Senate District 10).

He said he had been undecided because he had been waiting until his local newspaper — The Doylestown Intelligencer — released its voter guide. After reading it, he’s voting for Brian Fitzpatrick, his current Republican congressman. Mr. Maryanoff said his focus is on the candidates in his race and not the president: “I’m not going to paint everybody in the G.O.P. as a Trumpist.”

When our pollsters called Mr. Ballesteros, he said he was undecided even though he wasn’t. In a follow-up interview, he told us he had said that because he feared the results of early polls would influence what happened in the election. “Everything is so manipulated,” he said. “I didn’t want to be used as a tool.”

Mr. Ballesteros, who was a registered Republican in 2016 but did not vote for Mr. Trump, voted for Beto O’Rourke as a check on the president. “I’d rather the government be in a stalemate — Trump won’t let the Democrats do anything, and the Democrats won’t let Trump do anything,” he said. “I’m just looking forward to the 2020 election.”