Michael Cohen Reveals Brutal Comments Trump Has Made About African-Americans 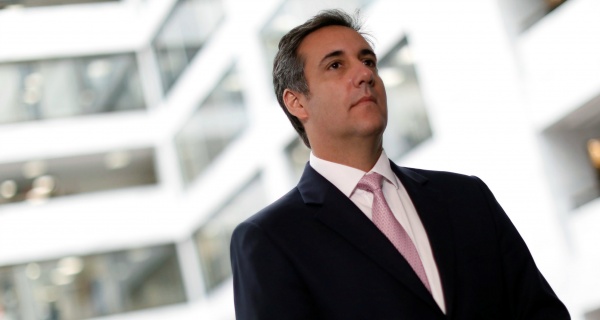 On Tuesday, mourners gathered in Pittsburgh to honor the victims of the harrowing attack on the Tree of Life synagogue. Days earlier, as they observed Shabbat, 11 Jews were murdered. Robert Bowers, the alleged suspect, later told a SWAT officer that he wanted all Jews to die. (Bowers has since pleaded not guilty.) The tragedy united thousands of Jews in Pittsburgh, who peacefully protested Donald Trump’s visit to the synagogue earlier this week. It also consumed a far larger constituency, which remained aghast that the alleged killer was motivated by fear fanned by the president of the United States.

Michael Cohen, the president’s former lawyer, was among those closely following the story. The son of a Holocaust survivor, Cohen has remained largely silent since the F.B.I. executed search warrants on his home, hotel room, and office this past spring. In August, he pleaded guilty to charges related to campaign-finance violations and tax fraud, and at the advice of counsel, he has not spoken publicly about his case or his relationship with the president ever since. Privately, he has been cooperating with investigators in the Southern District of New York, the special counsel’s office, and New York State. (He faces sentencing in the Southern District next month.) Yet Cohen wanted to express himself in the wake of the tragedy. Shortly after the sun rose on Tuesday, he tweeted, “In honor of those sadly being buried today resulting from #AntiSemitism #PittsburghSynagogueShooting, let’s follow the wisdom and thoughtful words of #RabbiJeffreyMyers ‘it can’t just be to say we need to stop hate. We need to do, we need to act to tone down rhetoric.’”

Like many, Cohen has observed the president’s scorched-earth campaign tactics as the midterm elections approach, and as the prospect of a Democratic House majority beckons, with its attendant promise of investigations and inquiries. He has heard Trump’s constant invocation of the migrant caravan moving through Central America; he’s noticed the president threaten to revoke birthright citizenship; he’s noted Trump’s tweet calling Florida’s African-American gubernatorial candidate, Andrew Gillum, a “thief,” without any evidence. He also watched Trump shirk responsibility after it was discovered that Bowers invoked the caravan in posts online ahead of the mass murder in Pittsburgh, and after one of his ardent supporters was charged last week with mailing pipe bombs to notable Democrats and other frequent Trumpian targets. (The suspect plans to plead not guilty.) On Twitter and during rallies, Trump has referred to the media as “the enemy of the people,” blaming the free press for “the anger we see today in our society.”

That message rang hollow to those most familiar with the president and his language, including Cohen, who said he has spent the last several months quietly reflecting on his former boss and his own role in the Trump Organization. Amid the president’s recent tirades, Cohen has re-registered as a Democrat and urged people on Twitter to vote in the midterm elections, calling it possibly “the most important vote in our lifetime.” He said that events also activated within him an urge to reveal details from his tenure at the Trump Organization, during which he said the president privately uttered chilling, racist language in one-on-one conversations. On Tuesday, the day of the first funerals in Pittsburgh, he shared some of these memories.

Certainly, Cohen is aggrieved, and his credibility has been questioned by the president, his lawyers, and others. His allegations could inflame the very divisions that he’s said he wants to diffuse. Through the president’s public attacks against him, he stayed silent, as his lawyers advised, and he’s taken a risk in sharing these recollections on the record. When I asked him why he was coming forward now with such uncomfortable claims, Cohen was clear: he knew that the president’s private comments were worse than his public rhetoric, and he wanted to offer potential voters what he believed was evidence of Trump’s character in advance of the midterm elections.

During our conversation, Cohen recalled a discussion at Trump Tower, following the then-candidate’s return from a campaign rally during the 2016 election cycle. Cohen had watched the rally on TV and noticed that the crowd was largely Caucasian. He offered this observation to his boss. “I told Trump that the rally looked vanilla on television. Trump responded, ‘That’s because black people are too stupid to vote for me.’” (The White House did not respond to multiple requests for comment.)

This conversation, he noted, was reminiscent of an exchange that the two men had engaged in years earlier, after Nelson Mandela’s death. “[Trump] said to me, ‘Name one country run by a black person that’s not a shithole,’ and then he added, ‘Name one city,’” Cohen recalled, a statement that echoed the president’s alleged comments about African nations earlier this year. (White House press secretary Sarah Huckabee Sanders denied those comments at the time. She added that “no one here is going to pretend like the president is always politically correct—he isn’t.” She subsequently noted that it was “one of the reasons the American people love him.”)

Cohen also recounted a conversation he had with Trump in the late 2000s, while they were traveling to Chicago for a Trump International Hotel board meeting. “We were going from the airport to the hotel, and we drove through what looked like a rougher neighborhood. Trump made a comment to me, saying that only the blacks could live like this.” After the first few seasons of The Apprentice, Cohen recalled how he and Trump were discussing the reality show and past season winners. The conversation wended its way back to the show’s first season, which ended in a head-to-head between two contestants, Bill Rancic and Kwame Jackson. “Trump was explaining his back-and-forth about not picking Jackson,” an African-American investment manager who had graduated from Harvard Business School. “He said, ‘There’s no way I can let this black f-g win.’” (Jackson told me that he had heard that the president made such a comment. “My response to President Trump is simple and Wakandan,” he said, referring to the fictional African country where Black Panther hails from. “‘Not today, colonizer!’”)

In retrospect, Cohen told me that he wishes he had quit the Trump Organization when he heard these offensive remarks. “I should have been a bigger person, and I should have left,” he said. He didn’t, he said, because he grew numb to the language and, in awe of the job, forgave his boss’s sins. Cohen, in fact, even defended the president publicly against charges of racism. Last year, he explicitly tweeted as much. Cohen explained that he defended the president because he thought the magnitude of the office would eventually force him to be more judicious with his words. “I truly thought the office would change him,” he said. But it hasn’t, Cohen continued. In fact, he said, it has exacerbated his rhetoric.

Cohen’s claims would damage most presidents. Trump, however, survived the Access Hollywood tape in the run-up to the presidential election in 2016. His supporters stayed with him after his jarring “both sides” comment regarding the racial violence in Charlottesville, and didn’t bend when Omarosa Manigault Newman accused him of using vile racial language after she left the White House. (Trump referred to her as “that dog” after her book came out.) When Trump portrayed Brett Kavanaugh as a man under siege, his poll numbers went up. Trump seems to perform best with his base when he appears like his back is up against the wall. For Cohen’s part, he said he is hoping that people bear his words in mind as they cast their ballots on Tuesday. He will.