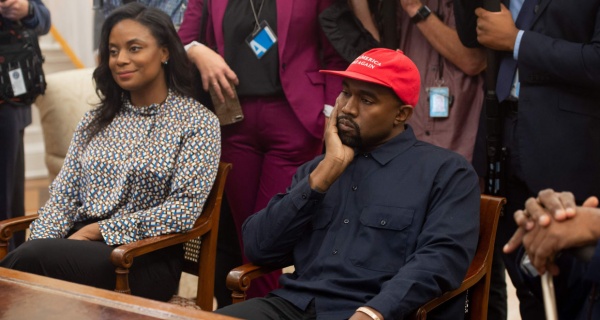 Kanye West's sudden decision to withdraw from politics was driven by the damage his pattern of erratic behavior has done to his fashion business, according to new reports.

The rapper made the stunning announcement that he would be quitting politics in a long-winded Twitter rant Tuesday in which he claimed he had been 'used to spread messages I don't believe in'.

However, a new report from Showbiz411 claims there's a much simpler explanation for Kanye's sudden change of tune: money.

According to the site, West's fashion empire has suffered as a result of his polarizing political persona - who maintains a close friendship with Donald Trump and has claimed that 'slavery is a choice'.

West hopes that departing politics will result in a more success for his three new sneakers styles with Adidas, launching just in time for the Christmas season, amid fledgling sale numbers for his Yeezy shoe line.

Research platform Spotted recently published a study about the impact of West's recent behavior on his reputation and his ability to drive sales.

According to the study, there were two key episodes that damaged the rapper's appeal with 25-and-under, his products' key demographic.

The first was the TMZ Live appearance in May during which West made the suggestion that African Americans had chosen to be enslaved.

The second was his infamous meeting with President Trump in the Oval Office early this month, where he went on a bizarre rant about a number of topics mainly related to race.

Spotted co-founder and CEO Janet Comenos told Footwear News: 'Part of [Kanye's] persona is that he is so outrageous that he gets a ton of exposure, which can be helpful to [a fashion label].

'But some of his more recent behavior has reduced his appeal with the younger segment of consumers when [appealing to that group] is exactly why Adidas is using him.'

The Spotted report concluded that despite his fame and considerably large audience, West likely isn't the best pick for brand ambassador.

According to Comenos — whether solo or with the Kardashians by his side — Spotted does not find West’s fame to be worth the danger.

Comenos said: 'Overall, he’s an extremely risky choice, and not someone I’d be recommending to a brand in the fashion space.

'There are a lot of celebrities out there that can help a brand be perceived as more edgy — and they don’t have these other negative qualities [such as being] erratic, rebellious or negatively outspoken, where Kanye ranks high.'

Just one day after Kanye revealed his political departure Trump denied that there was any kind of rift between him and the rapper on Wednesday.

'We get along great. He's a good guy,' Trump told reporters at the White House before he left for a campaign rally in Florida.

Trump has touted his close relationship with Kanye on several occasions as he tries to appeal to black voters ahead of the midterm elections next week.

However, Kanye delivered a harsh blow to his buddy in his Twitter rant on Tuesday by criticizing the president's immigration policy.

'My eyes are now wide open and now realize I've been used to spread messages I don't believe in. I am distancing myself from politics and completely focusing on being creative !!!,' he wrote on Twitter.

'I support those who risk their lives to serve and protect us and I support holding people who misuse their power accountable. I believe in love and compassion for people seeking asylum and parents who are fighting to protect their children from violence and war,' the rapper wrote.

West said even though his name was used he 'never wanted any association' and has 'nothing to do with it.'

'I introduced Candace to the person who made the logo and they didn't want their name on it so she used mine. I never wanted any association with Blexit. I have nothing to do with it,' he tweeted.

Owens has urged Black voters to leave Democrats as part of her 'blexit' campaign.

Her movement got national attention after she said West helped her design its logo.

'Kanye saw my original design, and said, 'I can do it better,' Owens said. 'It certainly was. He redesigned the logo with vibrant colors inspired by his trip to Uganda.'

The rapper and designer also debuted a line of shirts endorsing a 'Black Exit' from the Democratic Party at the Young Black Leadership Summit in Washington, DC, on Saturday - even as he denounced the movement on Tuesday.

West did not attend the summit although there had been rumors he would be there.

West also thanked his family for their support. He is married Kim Kardashian, who has met with Trump, his daughter Ivanka Trump and son-in-law Jared Kushner about prison reform.

'I would like to thank my family, loved ones, and community for supporting my ACTUAL beliefs and my vision for a better world,' West wrote on Tuesday.

Kardashian's May meeting at the White House led the president to grant clemency to Alice Marie Johnson, whom Kardashian had become a prominent supporter of after reading about her case online.

West is close with Trump, having first met with him at Trump Tower shortly after Trump won the 2016 presidential election.

He has tweeted his support of him and often wears a red 'Make America Great Again' hat.

He also met with the president in the Oval Office earlier this month where he went on an extended rant as he sat across from Trump at the Resolute Desk, where he dropped the F-bomb, spoke about his bipolar disorder diagnosis and even shared a warm hug with the president, who concluded that his speech 'pretty impressive'.

West, who wants to be known as Ye, said he has come to understand that 'bravery helps you beat this game called life' and that he was misdiagnosed with a mental health disease when he was really just sleep deprived in a 10-minute speech, followed by nearly 10 minutes of questions, in which he labeled himself a 'crazy motherf***er' and called the amendment that ended slavery a 'trap door' and said it should be abolished.

'They tried to scare me to not wear this hat, my own friends, but this hat it gives me, it gives me power,' West asserted. 'You know, my dad and my mom separated, so I didn't have a lot of male energy in my home. And also, I'm married to a family that, you know – not a lot of male energy going on. It's beautiful though,' he said, breaking into nervous laughter as he spoke about his wife Kim Kardashian West and her family.

He said the hat is like a Superman cape and said that Trump made him a billionaire.

West told Trump, 'I love you' at the end of their sit down as he came around to give him a hug. The president informed him that the didn't want to put him in a bad spot. 'No, I'm standing in this spot, I love this guy right here,' West volunteered.

'That's really nice. Come here. That's really nice. And that's from that heart. I didn't want to put you in that position. But that's from the heart. Special guy,' Trump said. 'These two are special people. Whether you like it, whether you don't like it, they're special people. And I appreciate it. Jim, Kanye, I appreciate it,' he said of West and NFL Hall of Famer Jim Brown, who was also at the White House for the lunch.

West said in the conversation that he wouldn't challenge Trump in 2020 for president - but he could seek the Oval Office for himself in 2024.

'Let's stop worrying about the future all we really have is today,' he said. 'Trump is on his hero's journey right now. And might not have thought he'd have a crazy mother-f***er like Kanye West's support.'

Trump said he'd be happy to have West on the trail with him next year. 'He can speak for me any time he wants. He's been there. Great guy. Smart cookie. Smart. He gets it.'

Trump has tried to use his ties with West and prominent African Americans such as golfer Tiger Woods to gin up support among black voters.

The president has credited Kanye with his own surge in support among African Americans when he spoke to Fox News earlier this month - and he told DailyMail.com in October that the backing stems from his dedication to raising black unemployment.

'I will say this, when Kanye came out very strongly a number of months ago, something happened. My polls went up like 25 percent. Nobody's ever seen it like -- he's got a big following in the African-American community,' Trump said. 'A big, big following. And I think he has in a lot of communities. But the polls went through the roof. And I have not seen that -- I think I have -- I can honestly say, I've never seen that before to that extent.'

Trump hailed West as a 'smart guy' and said the artist 'loves' what this administration is doing for African-Americans.