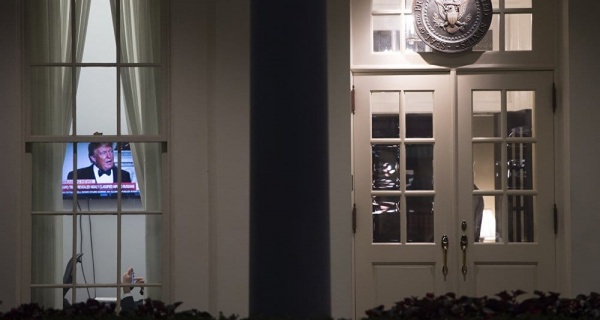 An investigation by Politico has found that President Donald Trump’s “executive time” — which is used by the White House as a euphemism for the time he spends watching cable news — absolutely dwarfs the time allotted to doing official work.

Specifically, Politico reports that last Tuesday, “the president was slated for more than nine hours of ‘Executive Time,’ a euphemism for the unstructured time Trump spends tweeting, phoning friends and watching television.” The publication then notes that “official meetings, policy briefings and public appearances — traditionally the daily work of being president — consumed just over three hours of his day.”

Some of the president’s supporters insisted to Politico that he often used his “executive time” to make important phone calls to congressional and world leaders, despite the fact that past reporting has indicated that most of the time he merely calls friends to complain about negative coverage he’s receiving.

The report also notes that Trump typically doesn’t start working until 11 a.m. on most days, as he’s scheduled a solid block early in the morning to watch “Fox & Friends,” one of his favorite cable news shows.

“The president’s official commitments last week began no earlier than 11 a.m… and on Tuesday — in the midst of a potential serial bomber and two weeks ahead of the midterm elections — they didn’t start until 1 p.m.,” the publication reports.