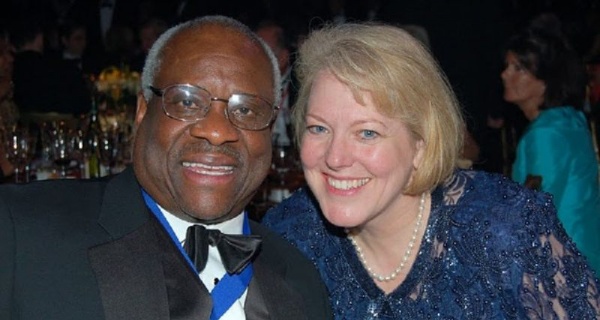 A viral photo showing Mexican officers brutally beaten and bloodied by the growing migrant caravan nearing the US border is false.

The image has been shared tens of thousands of times on social media and circulated by prominent figures - including Ginni Thomas, the outspoken wife of Supreme Court Justice Clarence Thomas.

'The media won't share THIS, will they?' Ginni, 61, wrote in a now-deleted Facebook post-Sunday. 'It is an invasion, and thank GOD for President Trump.'

Though the image is real, it was taken in 2012 during a during a clash in Mexico City. However, it has been used in 2018 to spread fake news about the migrant caravan, which Trump has said is infiltrated with 'criminals and unknown Middle Easterners.'

Virginia 'Ginni' Thomas is a conservative activist who has been vocal about issues including the Parkland mass shooting.

In March, Ginni shared a number of posts that were critical of the stance many Parkland survivors took on gun control.

One post she shared called 17-year-old high school student David Hogg 'a special kind of stupid', while another compared gun control to the Holocaust.

She infamously called Anita Hill in 2010 demanding she apologize to Justice Thomas for accusing him of sexual harassment in 1991. 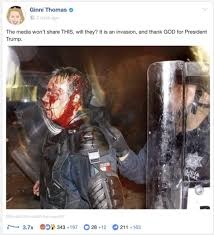 Now, she has circulated misleading images that push her conservative political agenda - something Facebook has been working hard to stop since the 2016 election.

In a statement, Facebook said: 'In this situation, while it's something we should have caught sooner, we were able to identify and address duplicate versions of this photo that were being shared elsewhere on Facebook; thanks to a ''false'' rating from one of our third-party fact-checkers on this photo, we've been able to demote these duplicate posts in News Feed.'

According to Snopes, a fact-checking site, the image was initially posted by a Twitter user Mike Allen.

'Mexican police are being brutalized by members of this caravan as they attempt to FORCE their way into Mexico,' Allen's caption read. 'And WE are supposed to believe these are just poor, helpless refugees seeking asylum??? I am 100% behind POTUS deploying our military to protect our border and keep them out.'

It was later posted by Ginni Thomas.

'Many of the worst sources of political news and information are now covering the movements of the immigrant caravan,' Phil Howard of Oxford University's Computational Propaganda Project, told the Washington Post.

'Social media is awash with pictures that portray an angry mob heading for the US border.... This kind of the event is easy for junk news outlets to turn into a sensational news story,' he added.

Facebook revealed to The New York Times last month that it has a team of nearly 20 people who monitor and delete false political information after it faced criticism for not doing enough during the 2016 presidential election.

Facebook's product manager Antonia Woodford said last week: 'Every day, our team fights the spread of false news through a combination of technology and assessments from independent third party fact-checkers.'

The social media site says it will continue to try to stop misinformation from spreading, especially with the 2018 midterm elections just around the corner.