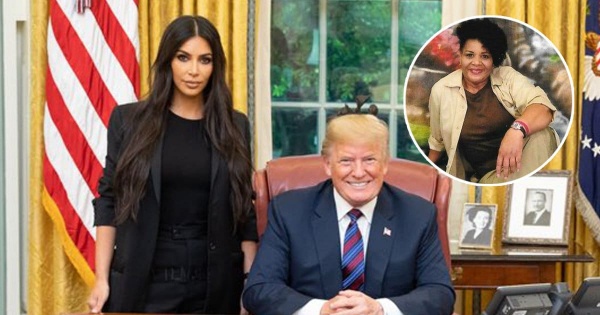 Kim Kardashian said Alice Johnson would still be in prison if Kanye West was not a Donald Trump supporter.

The 38-year-old reality star during an appearance on Sunday on The Alec Baldwin Show discussed her campaign to free Johnson, a 63-year-old woman sentenced to life in prison for cocaine trafficking.

'I do believe she would still be in prison,' Kardashian told Baldwin, 60.

'Alice and I have spoken about this a few times. Alice always says if it wasn't for Kanye speaking up in support of Trump, then she would still be in jail. She says that all the time,' Kardashian said.

'I called Ivanka [Trump] first, I felt really passionate about Alice and that it was so unfair and I felt and was hoping Ivanka would hear me out and understand me. She recommended I speak to her husband and he heard me out.

'If I knew that I had the power to change her life then I was going to try,' she said.

Johnson after serving 21 years in prison had the rest of her life sentence commuted by Trump.

Kardashian said she has been working with a team of lawyers who help her with cases similar to Johnson and that she is funding the work herself.

She said that her current case is a man sentenced to life for possessing marijuana and half a gram of cocaine.

'The bigger goal is to get these bills passed that really change the laws to make the distinction between crack and cocaine completely separate and just getting people out,' she said.

'Sentencing reform, bail reform, there's so much,' she added.

Kardashian also told Baldwin how she keeps her four-year marriage to West, 41, solid despite their different political views.

'I let him be who he wants to be. I let him have his own views and opinions, even if they are different from mine.

'I grew up in a household where Bruce [Jenner] my stepdad had one political view and my father maybe another political view. We would always just talk about it and be really open about it and it was really OK to have different views.

'For me, I think it's just about having an open mind. I love to let my husband be who he is.