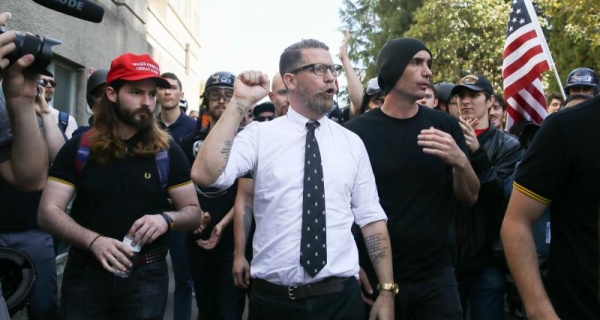 An October 12, three far-right skinhead gang members attended a talk by Proud Boys founder Gavin McInnes at the Metropolitan Republican Club in Manhattan, according to video, photographic, and eyewitness evidence.

One of them, Irvin Antillon, assaulted three people in a street brawl afterwards and is one of nine Proud Boys being sought by police in connection to the attack. (On October 18, police announced the first Proud Boys arrest, of Geoffrey Young, on charges of rioting and attempted assault.)

A video shows( see video below) Antillon, a member of Battalion 49, a Latino skinhead gang based in Queens, leaving the club. Seconds later, two members of the 211 Bootboys walk out: Joe Bola (allegedly a pseudonym) and Dennis Davila, owner of a music label and promoter of festivals popular among hate groups. The Southern Poverty Law Center labels the 211 Bootboys “an ultranationalist far-right skinhead crew.”

Minutes later, Antillon is seen in security camera footage wearing a jacket and striped track pants kicking an opponent lying on a sidewalk. A third video, a live stream, shows Antillon kicking and manhandling two other people. Shay Horse, who photographed the event and the assault, as well as the Proud Boys celebrating afterwards, took photos of the three skinheads leaving the club. He says their pictures match the names and pictures published by antifascists. The SPLC separately identified Antillon, Bola, and Davila in Horse’s group photo.

The fight apparently began a block away from the club after a handful of anti-fascists confronted the Proud Boys and threw a plastic bottle in their direction. It quickly turned into a one-sided battle with more than a dozen Proud Boys stomping on, choking, and punching three anti-fascists. One person yells, “Kill him. Kick this motherfucker.” Others move in to break it up and yell, “Walk away” as police on scooters roll up. Sources say two anti-fascists were hospitalized overnight.

After the fight, the live stream follows Proud Boys yelling, “Fuck around and find out.” That’s the group’s refrain to claim it was acting in self-defense after a violent incident. One person gloats, “Dude, I had one of their fucking heads, and I was just fucking smashing it into the pavement.” Two dozen Proud Boys and allies then pose for a photograph by Horse before leaving the area.

That photo shows Antillon standing next to Bola and Davila. Police say last year half-a-dozen members of the 211 Bootboys wielding brass knuckles and a knife attacked two brothers over a phone one had with an anti-fascist sticker outside a bar in Lower Manhattan.

The presence of Antillon and the 211 Bootboys at McInnes talk was not random. They act as a bridge between the Proud Boys and white supremacists. Similarly, McInnes bridges his self-described “gang” with Republicans and media stars like Tucker Carlson who have embraced him despite his belief, “Fighting solves everything.”

Founded during the 2016 presidential election, the Proud Boys claim to be a multi-racial beer-drinking club for those opposed to white guilt. Over the last year, however, the Proud Boys have become notorious for street brawls, and allying with Neo-Nazis and white supremacists.

That’s how far-right skinheads wound up in the Metropolitan Republican Club. It’s an example of how the Trumpification of the Republican Party is so thorough that a once-genteel bastion of Manhattan conservatism is now hosting violent, right-wing mobs.

When the NYPD, under heat from politicians, critics, and the media for “incredibly deferential” treatment of the Proud Boys, published photos of the nine wanted men, it apparently had no idea who Antillon was despite his status as a gang member.

But the SPLC did. It says it’s been aware of Antillon for years “because of his dedicated activity within the far-right, extremist skinhead scene in New York City.”

In the spring of 2017 Antillon became associated with the Proud Boys “official military arm,” the Fraternal Order of Alt-Knights (FOAK). The SPLC says the FOAK was “an accelerant for violence at right-wing rallies.” Under the auspices of the FOAK, Antillon attended the Charlottesville rally, where a neo-Nazi allegedly murdered anti-fascist Heather Heyer. While there, Antillon was pictured near Identity Evropa, a white nationalist organization. He was joined by FOAK leader Augustus Sol Invictus, a Holocaust-denier.

McInnes claims the Proud Boys had nothing to do with Charlottesville, but Invictus and the FOAK are named in a lawsuit by ten people claiming injury from the event.

In terms of Antillon’s involvement with Battalion 49, a web page linked to him is filled with pictures celebrating skinhead culture. A photo of Antillon shows him with two other tattooed skinheads. All three have “Totenkopfs” inked on their torsos — skull heads associated with neo-Nazi subculture.

Antillon is a key node in the Proud Boys subculture as he fraternizes with Bola and Davila of the 211 Bootboys who in turn hang out with neo-Nazis.

Like many right-wing skinheads, Battalion 49 is not explicitly neo-Nazi. They are immersed in the Oi! music and football club scenes popular among far-right skinheads. They are also nationalist, anti-Left, and glorify gangsters. In the age of Trump, and his veneration of aggressive masculinity and violence, that makes them prime recruits for street-fighting forces like the Proud Boys and Patriot Prayer. They are the shock troops for Trump’s nativist agenda that’s anti-Muslim, anti-immigration, anti-Black Lives Matter, as well as anti-Left and misogynist.

Daryle Lamont Jenkins is founder of the anti-fascist One People’s Project and has organized against fascists for decades. He calls Battalion 49 “Hispanic Nazis and racist skinheads.” Jenkins says, “They try to say that they are just nationalists. But when you see the Nazi tattoos that’s a dead giveaway. They have been associated with a lot of neo-Nazis and neo-fascists, and they defend them.”

This is emblematic of a double game that Trump has perfected of promoting hate while denying it. Jenkins says the far-right skinheads do the same thing. “They say, ‘How can you say we’re racist, here’s my Black friend?’ Except their Black friend is wearing a white power t-shirt.”

This is also crucial to the Proud Boys methods. They rely on recruiting extremists while denying it to the mainstream media, who often credulously accept the denials. After the violent Proud Boys assault, the New York Times failed to challenge McInnes’ claim he has no connection to the 211 Bootboys. “I don’t represent them and I have no idea who they all are and what they stand for.”

In May 2017, however, McInnes acted chummy with Bola while he threw a sign for the 211 Bootboys. That February, McInnes very publicly defended the skinheads. He claimed the two brothers allegedly injured in the bar attack were “ruining people’s lives” by lying that the 211 Bootboys attacked them.

McInnes also published the brothers’ personal information, leading them to be “doxxed pretty hard.” But the New York Post, which broke the story, reported that “police sources say they have a mountain of evidence that knocks down” McInnes’ claims.

“Alt-light” groups like the Proud Boys and their West Coast allies, Patriot Prayer sell themselves as “anti-racist, pro-First Amendment, pro-Second Amendment” and are hated by genuine neo-Nazis for rejecting racial purity and not openly espousing anti-Semitic conspiracies of unlimited Jewish power.

But in their brief history, the Proud Boys have a documented record of allying with extremists. They have rallied with the Rise Above Movement, which recruits from Hammerskin Nation, the country’s largest Nazi skinhead gang. Some Proud Boys are also members of the neo-Nazi American Guard, according to the SPLC.

Despite denials, the Proud Boy had numerous connections to the deadly Charlottesville rally. Jason Kessler, who organized “Unite the Right,” was a Proud Boy. He was initiated into the group beforehand, appeared on McInnes’ show to promote the rally, and was reportedly expelled only after the blowback from Heyer’s killing.

Proud Boy Salvatore Cipolla, who allegedly assaulted two reporters outside a Gavin McInnes talk at NYU in February 2017, appeared in Charlottesville and left the group afterwards, shifting further to the right. Alex Michael Ramos, who claimed to be a Proud Boy, was recently sentenced to six years in prison for his role in the notorious parking-garage assault on DeAndre Harris in Charlottesville.

Despite this record of extremism, the Proud Boys are becoming more violent. In one week, they engaged in mob attacks in three cities: New York, Providence, Rhode Island, and Portland, Oregon. In Portland, Patriot Prayer and the Proud Boys have been involved in bloody brawls three times in four months, turning the city into a battleground for the far-right.

But not one person was arrested during the most recent incident in Portland. New York City is a different story only because a slew of politicians, including the mayor, city councilors, the governor, and attorney general demanded police investigate the incident.