Republicans Have Abandoned Their Souls To Kiss The Ring 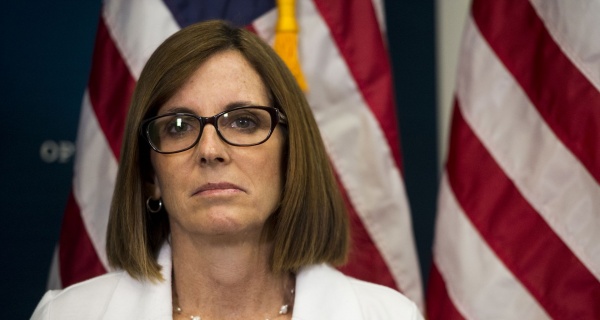 Before she decided to run for U.S. Senate in the age of Trump, Martha McSally was one of the more formidable up-and-comers in Congress. The Republican from Arizona overcame sexual abuse as a teenager to become a barrier-breaking Air Force fighter pilot and role model for young women, then a vote-getting wizard in a blue-leaning House district that Hillary Clinton won by 5 points in 2016 (McSally took it by 14). Her popularity was boosted by her signature moment in the national spotlight two years ago this month, when Donald Trump’s “grab ‘em by the pussy” tape emerged and McSally pulled no punches in her response:

Clearly, this was one Republican who wasn’t about to kiss Trump’s nasty ass. Having nailed down her reputation as the second coming of John McCain, a thoughtful conservative possessed of an occasionally stubborn independent streak, McSally became the Republican establishment’s most prized recruit for this year’s midterms when Sen. Jeff Flake (R-AZ) decided to squeeze himself out of the clown car and abandon his post in the Senate. Who better to fend off the serious challenge of moderate Democrat Kyrsten Sinema (flashing her own 62-percent voting record in support of Trump) in this #MeToo year in a state trending Democratic? McSally was made for this mission.

But like every other Republican who had a competitive primary this year, she first had to run a gauntlet of Trumpism.

In McSally’s case, this took the two-headed form of Laura Ingraham doppelganger Kelli Ward and convicted-and-pardoned felon Joe Arpaio. With those characters splitting the considerable wingnut vote among Arizona Republicans, McSally almost certainly could have prevailed by running as herself and emerged as the clear favorite to win the general election. Instead, she followed the led of her fellow Republicans and intrepidly set her sights on out-Trumping the others, abandoning both her political convictions and every last vestige of her dignity to curry favor with the king.

It’s hardly novel g for politicians to pander to a sitting president of their own party when auditioning for bigger roles. But as McSally could clearly see, merely expressing enthusiastic support for the party leader and defending his agenda are not sufficient to win that coveted nod of approval from Trump. It’s not enough to praise the economic and peacemaking wonders of his reign, or to support him with 98 percent of your votes, as she’s done since the formerly ”offensive” Trump took office. This president knows that imitation is the sincerest form of flattery, and he insists on it. Trump doesn’t want allies; he wants a Congress and a party full of mini-mes and capering supplicants. He wants Ted Cruz dancing on the head of a pin, begging to know: “Am I dancing fast enough, sir? Could you please tell me again how my daddy murdered JFK, how my wife is a zero? What, oh what, can I do to induce you come to Texas and help me fend off Beto’s socialism?”

And so, from an ardent DACA defender and border-wall skeptic, McSally remade herself into a fire-breathing border hawk, stumping frequently with anti-immigrant crusader Jan Brewer, the state’s Obama-bashing former governor. From someone who’d made a point of skipping Trump’s coronation at the 2016 Republican Convention, McSally became a shameless sycophant, boasting of her invitations to movie night at the White House. She began bashing reporters as “you people,” raving about “media nonsense” whenever she was asked about Trump’s latest misogynistic outbursts, and otherwise doing her best imitation of Sarah Palin circa 2018: “Like our president, I’m tired of PC politicians and their BS excuses,” McSally said in January, while announcing her candidacy. “I’m a fighter pilot, and I talk like one. That’s why I told Washington Republicans to grow a pair of ovaries and get the job done.”

And by God, look how well it worked out for her! McSally’s Trump act won her a primary she was already a cinch to win, followed by the great honor of a fill-in-the-blanks endorsement tweet from @realDonaldTrump — and she emerged with a sizable deficit against Sinema to overcome. Did she then try, as the script used to go, to regain some of that old centrist magic and leaven her Trump impression with a little bit of McCain? Not in the least. As Flake himself commented earlier this year, you just can’t “pivot” once you’ve gone Full Trump; the right-wingers will call you a sellout and sit out the election, or — fate worse than death! — Trump will refuse to come to your state and campaign for you.

So McSally’s self-beclowning has continued apace, capped (so far) by her recent Alex Jones moment in a debate with Sinema, where she accused the Democrat of “treason” because she implied in a 15-year-old radio interview that she wasn’t losing sleep over Americans joining the Taliban.

On Friday, McSally finally gets her treat for good behavior: Not just one Trump rally in Arizona, but three events in one day! The president is nothing if not benevolent, as McSally will surely remind his majesty as they tour her favorite Air Force base, head to a high-dollar private fundraiser, then cap it off with a 10 p.m. (EST) rally. But wait, there’s more: Trump has hinted that, if she continues to slavishly mimic and flatter him, he might even come back for another rally in Arizona before Election Day.

Unfortunately for McSally, Trump’s rallies haven’t exactly served as surefire booster rockets for his sycophants this year. Thus far, the president has stumped multiple times for only three Senate candidates in states he carried in 2016 — and all three (Patrick Morrisey in West Virginia, Jim Renacci in Ohio and Lou Barletta in Pennsylvania) are down by sizable margins to the once-vulnerable Democratic incumbents they’re challenging. The other top-of-the-ticket candidates he anointed in competitive primaries, elevating them over less-obsequious conservatives, are struggling mightily to win seats any generic Republican was favored to capture this year: Ron DeSantis in Florida, Brian Kemp in Georgia, Marsha Blackburn in Tennessee, Mike Braun in Indiana and Matt Rosendale in Montana.

All of these candidates have embraced, often with an awkwardness and dissonance to rival McSally’s, full-on Trumpiness. They’ve tried and utterly failed to invent devastating nicknames for their Democratic opponents — “Hollywood Sinema,” “Sleeping Bob [Casey],” “Sherrod ‘full of bull’ Brown” and “Little Timmy [Kaine]” — are among the gems. They’ve faithfully bayed for the blood of “illegal” babies, twisted Trump’s groveling press conference with Vladimir Putin into a Churchillian moment of bravado and pooh-poohed or mimicked his mockery of Christine Blasey Ford.

The sadly overmatched Barletta, whom Trump personally convinced to abandon his House seat for a joust at the popular Sen. Bob Casey in Pennsylvania, made an ungainly — but utterly characteristic — stab at Trumpiness last time the president came to town. After lauding Trump for overseeing the “greatest economy in American history,” Barletta elaborated: “Four million new jobs were created! I’ll tell you how good the economy is — this economy is so good that even Colin Kaepernick has a job.”

Cruz, who should never have had to sweat his re-election in Texas, even against a gifted gabber (and fundraiser) like Beto O’Rourke, took his own swing and missed in September when he remarked, in his stone-faced way, that the Democratic upstart was hellbent on “banning barbecue” from the Lone Star State.

One of the great questions of these midterms was whether Trumpism would prove a winning formula for anybody but the president, himself. Was Trump’s political success sui generis, a winning formula only because it was being wielded by a celebrity running against a disliked female Democrat in 2016?

We don’t have to wait for November 6th for an answer: Trumpism is practiced most effectively by the man himself. Yes, Republicans will probably hold onto their majority in the Senate, and some of the aforementioned mini-Trumps will narrowly slither their way into office, but that won’t be thanks to their slavish fealty to the Dear Leader: The odds were heavily stacked against Democrats, who’d won a whole host of miraculous senate victories in 2012 by the skin of their teeth in states like North Dakota, while prevailing by dint of Tea Party insanity in other red outposts like Missouri, where Claire McCaskill likely still thanks Jesus on her knees every night for the gift of Todd Aiken (or should).

When Trump is gone at last — whether by impeachment, resignation or defeat in 2020 — Trumpism will rapidly go out of style among Republicans. He’s not a Reagan redux or a new Nixon, resetting the terms by which Republicans run and win for decades to come. His style of politics will soon be a historical aberration. And his most pathetic supplicants, like McSally, will end up looking every bit as ridiculous in retrospect as the man himself — even if she manages to come back and outpoll Sinema in November (which could happen, because Arizona).

What will people like McSally, who voluntarily stepped on the Trump landmine and blew up her own legend-in-the-making for fear of presidential disfavor, tell themselves when it’s all over? That they had to do it to win? (Which she, for one, absolutely does not). The shame of going down in history as a mini-Trump will surely be no match, for such a formerly strong personality as hers, for the purer humiliation of having sold her political soul on the cheap to a flash-in-the-pan grifter. Last May, in a secretly recorded tape of a closed-door meeting with supporters in Arizona, McSally provided a vivid glimpse of what it’s like to look at yourself in the mirror one morning and see that big orange head glowering back at you. “I have to navigate the political theater,” she confessed, “but I don’t breathe life into it, and I don’t enjoy it. To be frank, actually, it drains me more than it fills me up. It sucks the life out of me.”