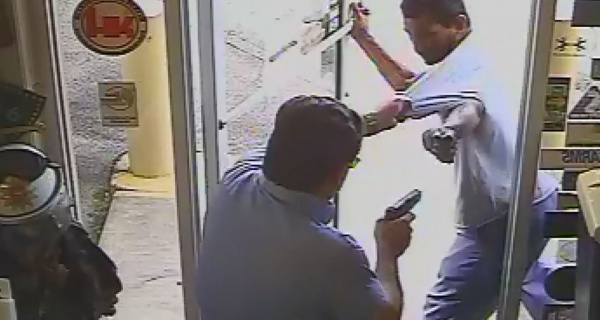 For more than a week, details in the case of a Lakeland city commissioner who fatally shot an alleged shoplifter came mainly from police accounts.

Then, on Monday, Lakeland police released surveillance video that gives the public an up-close view of the shooting. It’s a crucial piece of evidence that investigators are using to decide whether City Commissioner Michael Dunn, 47, should face charges in the Oct. 3 killing of Christobal Lopez, 50.

Two attorneys who reviewed the video at the request of the Tampa Bay Times said it seems to contradict the idea that Dunn was in fear for his life when he fired.

"This is a very difficult case to defend," said Tim Hessinger, a Tampa criminal defense attorney and former state prosecutor.

Video from inside the Vets Army Navy Surplus store shows Dunn holding a gun in his right hand as Lopez tries to advance toward the door. Dunn pushes Lopez with his left arm, and Lopez goes for the door again.

Still pointing the gun at Lopez, Dunn tries to grab Lopez’s shoulder from behind with his left hand as Lopez makes it out the door, the video shows. Dunn’s hand slips off Lopez’s shoulder but Dunn is able to grab a fistful of the man’s t-shirt. Lopez raises his left arm in an apparent attempt to break free, and then Dunn appears to fire.

Lopez falls to the pavement just outside the door. He appears to shake for a moment, then lies still as Dunn keeps the gun trained on him.

At the moment Dunn fires, Lopez is holding the door with his right hand and appears to be holding an object in that same hand. It’s unclear if the object is the hatchet that Lopez is suspected of trying to steal when he was shot.

Dunn’s attorney, Rusty Franklin, did not return a message Monday but has previously told reporters that Dunn was justified in shooting Lopez because he was holding the hatchet during the scuffle.

The video clip continues for about three minutes after the shooting. Lopez lies face down on the ground as Dunn walks in and out of the frame. No one is seen attempting to render first aid.

No charges have been filed in the case. A Lakeland Police Department spokesman said Monday that the agency and the State Attorney’s Office are still investigating.

Brian Haas, State Attorney for the 10th Judicial Circuit, said in a statement that he expects the investigation to conclude by the end of this week.

According to police, Lopez tried to pocket a hatchet inside the store. Dunn, a co-owner of the business, confronted him, asking if he was going to pay for the item. When Lakeland police officers arrived about 2:30 p.m., Lopez lay dead in the parking lot.

Florida’s self-defense law says a person can use deadly force "if he or she reasonably believes that using or threatening to use such force is necessary to prevent imminent death or great bodily harm to himself or herself or another or to prevent the imminent commission of a forcible felony." The controversial stand your ground law does not require people to retreat before using deadly force.

"Just from the video it doesn’t look like Mr. Dunn was in fear and wasn’t justified in shooting Mr. Lopez as he was leaving," said Bill Loughery, a former prosecutor with the Pinellas-Pasco State Attorney’s Office. "It appeared that, because he had his gun, Mr. Dunn was in charge of the situation from the standpoint he was directing Mr. Lopez what to do."

Hessinger, the Tampa defense attorney who is also is a former Pinellas-Pasco prosecutor, said it appears Lopez was trying to flee when he was shot and there’s no evidence in the video that he tried to use the hatchet as a weapon or gain control of Dunn’s gun.

"It appears in the video that all the force is being used by the commissioner," Hessinger said.

Another former prosecutor-turned-defense attorney, Robert Heyman, said the case is a "tough call."

Florida law allows store employees to use reasonable force try to detain suspected shoplifters, Heyman noted. He said if the object in Lopez’s hand is the hatchet, that would bolster any claim Dunn makes that he had to use deadly force to defend himself.

"There’s an argument that as the door’s opening, the guy could have taken a swipe at the store owner with a hatchet in order to escape," Heyman said.

Police described Lopez as a transient. His most recent address was a small house in the rural community of Wauchula, in Hardee County.

A funeral notice states that he was born in Arcadia and had lived most of his life in Hardee County. He was a Catholic and worked as a laborer in agriculture. He spelled his first name "Christobal," the notice says, which is a different spelling than police have provided.

Lopez’s family was laying him to rest as local news outlets were reporting the release of the video. His funeral service was Monday morning in Wauchula and he was buried in Zolfo Springs.

Dunn, an adamant supporter of gun ownership, hosted a July rally at his store to counter a nearby March for our Lives rally on the same day. March for our Lives is an advocacy group formed by Marjory Stoneman Douglas High School students seeking stricter gun-control laws.

The shooting is the second time Dunn has shot a person. But it’s the first time the shooting was fatal. The Lakeland Ledger reported that Dunn accidentally shot a man when he was 19.