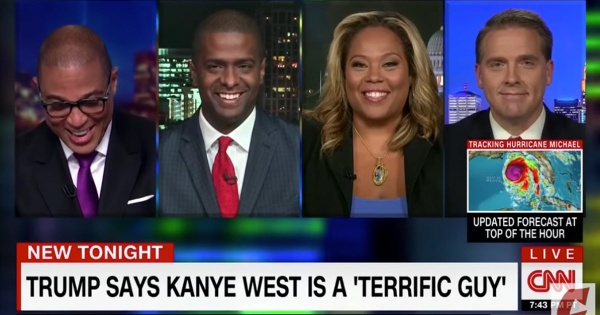 A CNN panel hosted by anchor Don Lemon took turns lacing into Kanye West on Tuesday evening, joking that his embrace of President Donald Trump has caused him to be tokenized. Several referred to him using the term “negro.”

“He’s an attention whore, like the president. He’s all of a sudden now the model spokesperson. He’s the token negro of the Trump administration,” said CNN contributor Tara Setmeyer.

“This is ridiculous and no one should be taking Kanye West seriously. He clearly has issues. He’s already been hospitalized,” she continued. “Not to trivialize mental health issues, [but] obviously Kanye has taken a turn in a very strange way.”

“Kanye West is what happens when negroes don’t read,” said Sellers. “And we have this now and now Donald Trump is going to use it and pervert and he’s going to have someone who can stand with him and take pictures.”

Throughout the bit, Lemon laughed along and joked about the expression of another panelist, CNN contributor Scott Jennings, who appeared visibly uncomfortable.

Reps for West and CNN did not immediately respond to request for comment from TheWrap.

It’s not the first time a CNN segment has floated mental illness as an explanation for Kanye’s behavior. During a “New Day’ episode last week, co-host Alisyn Camerota bluntly suggested Kanye might not be all there.

“I just am wondering if it’s time to start worrying about Kanye because he does go on, sometimes, nonsensical rants,” she said. “He has taken a break for some stress related issues, so I’m concerned.”

Kanye West has faced intense and withering criticism from fans and allies since making a public embrace of Trump in person and online. West was known to have been close to the billionaire before his election and that friendship has endured despite Trump’s basement approval ratings among black Americans.

West has become increasingly outspoken about his Trump love. After a performance on “Saturday Night Live” last month, the rapper sounded off and received a wave of boos from audience members after the cameras stopped rolling.

“You know it’s like the plan — the Democratic plan — to take the fathers out the home and promote welfare. Does anybody know about that? That’s the Democratic plan,” West said amid jeers on the soundstage of the NBC show. “So many times I talk to a white person about this and they say ‘how can you like Trump? He’s racist. If I was concerned about racism, I would have moved out of America a long time ago.”

For his part, Trump has returned the favor by rewarding Kanye with favorable tweets and granting him a private lunch at the White House later this week where the two are expected to discuss prison reform.