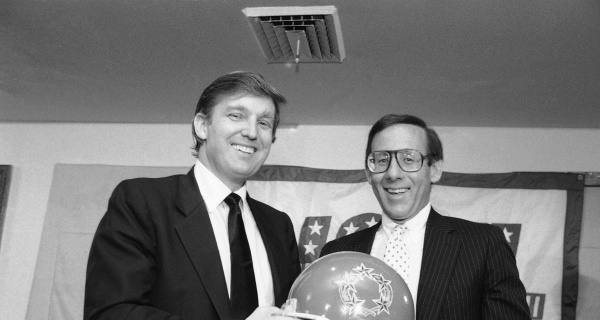 Donald Trump helped ruin the USFL in a failed attempt to crack into the NFL — and a new book shows that doomed effort foreshadowed his presidency.

New York Times reporter Jeff Pearlman’s new book, “Football for a Buck,” chronicles the ill-fated startup league that briefly challenged the NFL before collapsing under a lawsuit pushed by Trump intended to force a merger — but instead resulted in a humiliating $1 award to the USFL.

“That was the death of the USFL,” Pearlman said, but he said the 1986 lawsuit was premature — and wholly unnecessary, because he believes a merger would have been inevitable without it.

“A strike came along in ’87, (the NFL) used replacement players,” he said. “If the USFL had hung on two years you’d have this mass chaos and anarchy in football. There were teams — a team in Jacksonville before the Jaguars, a team in Tennessee before the Titans, a team in Baltimore after the Colts left, and a team in Birmingham. You would have had some sort of merger inevitably.”

Pearlman placed the blame for the USFL’s failure squarely on Trump’s shoulders, and said the debacle was part of a lifelong pattern.

“It was a scam, it really was a scam,” Pearlman said. “He bought the (New Jersey) Generals after the first season, the first season was 1983 — it was a spring league. They were on sale for $8.5 million, he paid $10 million, because he thought there was a bidding war that didn’t exist.”

Immediately after buying the Generals, he pushed for the USFL to directly challenge the NFL by playing its season during the fall — and he also tried to grab attention by signing Heisman Trophy-winning quarterback Doug Flutie, despite concerns about his small size.

“(Flutie) was the Mexico wall before the Mexico wall,” Pearlman said. “Donald Trump signs him to a six-year, $8.3 million — biggest contract in football at that time. He tells his partners at the Generals, ‘Don’t worry, we’re going to sign Doug Flutie, but the rest of the league is going to pay for it.’ His literal pitch to the other owners.”

Trump wrote a letter to the USFL commissioner and the other owners, arguing that he had overspent for Flutie as a gift to the league — and asked them to pay his quarterback’s salary.

“The other owners, much like Mexico, collectively gave him the middle finger and never paid a dime,” Pearlman said.

The author said Trump’s belligerence to the NFL as president was based on a personal grudge and his longtime insecurity at being shut out by the pro league.

“For a guy who hates the NFL, he sure wants to be in the NFL,” he added. “It was the club he could not get into.”