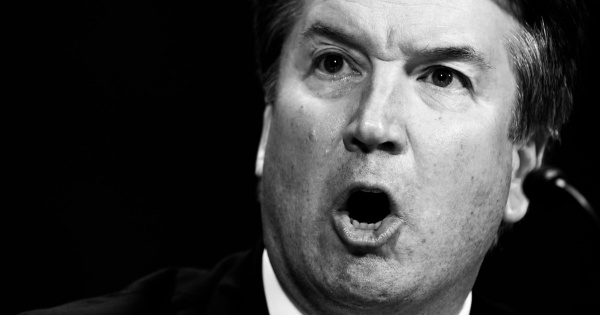 Jeff Flake told 60 Minutes that Kavanaugh would not be confirmed if the FBI probe showed that he lied to the Senate Judiciary Committee. We already know that Kavanaugh has lied. Repeatedly.

From Brett Kavanaugh’s first confirmation hearing for the D.C. Circuit Court to his most recent hearing with Dr. Christine Blasey Ford, he has lied. It didn’t matter how small or big the issue. It didn’t matter that he was under oath. Integrity matters, Kavanaugh’s character matters, and he has clearly shown that he is not fit for a lifetime appointment on the Supreme Court. Here are 29 times that Kavanaugh has lied.

In 2004, Kavanaugh claimed that the nomination of anti-abortion, anti-LGBTQ judge William Pryor was “not one that I worked on personally.”

Newly released emails showed Kavanaugh was involved in selecting Pryor, interviewing him, and working to confirm him.

In 2006, Kavanaugh denied he “primarily handl[ed]” the nomination of Judge Charles Pickering, who had pushed to reduce the sentence of a man convicted of burning a cross in front of an interracial couple’s house.

Emails released this year show that Kavanaugh prepared documents on Pickering and worked on a draft op-ed in support of the nominee.

In 2006, Kavanaugh denied that he “handled” the nomination of William Haynes.

Recent emails revealed that Kavanaugh played a large role in Haynes nomination, including determining that Haynes “would be an across-the-board judicial conservative”.

In 2004, Kavanaugh denied knowing that he had received documents stolen from Democratic senators during the Bush administration, claiming that he was “not aware of that matter ever until I learned of it in the media late last year.”

Emails showed that Kavanaugh received stolen information about Senator Leahy and was told to hold it in the “strictest confidence” and to keep it confidential — Kavanaugh should have known that it was improperly obtained.

Kavanaugh’s claims otherwise were deemed by one fact checker to “defy logic”.

In a 2004 written questionnaire, Kavanaugh wrote “These meetings, calls, and emails were typical of how judicial confirmations have been handled in past

As Glenn Kessler noted in the Washington Post, Kavanaugh’s claims that his interactions with Miranda were “typical” of past administrations is “not accurate”.

In 2006, Kavanaugh again denied knowing that he had received the stolen documents saying that he “Did not know about it, did not suspect it.”

Emails showed that Kavanaugh received stolen information about Senator Leahy and was told to hold it in the “strictest confidence” and to keep it confidential — Kavanaugh should have known that it was improperly obtained.

In 2018, Kavanaugh denied knowing that he had received documents that were stolen from Democratic senators during the Bush administration, claiming that his interactions with Miranda were “the usual kinds of discussions that would happen.”

Kavanaugh’s description that his interactions were “usual” has been categorized as “not accurate”.

During his confirmation hearing in 2006, Kavanaugh said, “I was not involved and am not involved in the questions about the rules governing detention of combatants.”

One year later, it was reported that Kavanaugh had, in fact, counseled a group of White House lawyers regarding the administration’s decision to deny lawyers to enemy combatants. There are now at least three recorded examples of Kavanaugh participating in discussions of Bush administration detainee policy.

During Kavanaugh’s 2006 confirmation hearing, he lied under oath about his work on warrantless wiretapping. Kavanaugh denied involvement in a controversial Bush-era surveillance program and said that he didn’t know about it until the program was revealed by the New York Times.

A newly released email shows that Kavanaugh asked the Justice Department about the constitutionality of “random/constant surveillance of phone and email conversations of non-citizens who are in the United States when the purpose of the surveillance is to prevent terrorist/criminal violence.”

Kavanaugh claimed that his previous testimony about his work in the Bush White House was “100 percent accurate.”

As Leahy detailed, “There is evidence that Mr. Miranda provided you with materials that were stolen from me,” Mr. Leahy said at the hearing. “And that would contradict your prior testimony. It is also clear from public emails — and I’m refraining from going into nonpublic ones — that you had reason to believe materials were obtained inappropriately at the time.”

During his 2006 confirmation hearing for his D.C. Circuit Court nomination, Kavanaugh assured members of the Senate Judiciary Committee that he would “follow Roe v. Wade faithfully and fully.”

A decade later, and just one year after the Supreme Court once again reaffirmed Roe v. Wade in Whole Woman’s Health v. Hellerstedt, Kavanaugh ruled to deny a woman the right to get an abortion without obstruction by the federal government.

“When this allegation first arose, I welcomed any kind of investigation. Senate, FBI or otherwise. The committee has now conducted a thorough investigation, and I cooperated fully. I know that any investigation … will clear me.”

NBC News: “Kavanaugh did not publicly welcome an investigation in two public statements denying the allegations and an in-depth interview with Fox News. It is unclear if he did so privately.”

Kavanaugh claimed in his opening statement on September 27, “I spent most of my time in high school focused on academics, sports, church, and service.”

As Kavanaugh’s own calendar indicated, there were a lot of parties and gatherings noted, as the Washington Post noted, “But it does have one interesting entry: “Go to Timmy’s for Ski’s.” That’s a slang term for “brewskis” = beer, and he includes other friends who Ford alleges were at the party — or in the room, in the case of Mark Judge — when the incident occurred.”

Kavanaugh stated, categorically, that he “never attended a gathering like the one Dr. Ford describes in her allegation.”

Kavanaugh himself admitted that his calendars “show a few weekday gatherings at friends’ houses after a workout or just to meet up and have some beers.

Kavanaugh argued that “none of those gatherings included the group of people that Dr. Ford has identified.”

Kavanaugh testified, “When my friends and I spent time together at parties on weekends, it was usually with friends from nearby Catholic all-girls high schools — Stone Ridge, Holy Child, Visitation, Immaculata, Holy Cross. Dr. Blasey did not attend one of those schools. She attended an independent private school named Holton-Arms, and she was a year behind me.”

‘Holton-Arms was definitely part of our social scene,’ Mr. Barbot said. Another Georgetown Prep alumnus who was in Judge Kavanaugh’s class said, ‘Holton was as much a sister school as the others.’”

According to Slate, “Nine times during Thursday’s hearing, Kavanaugh claimed that four of the teenagers, including himself, made statements affirming that Ford’s version of events didn’t happen.”

For example, Kavanaugh claimed that “[a]ll four witnesses who are alleged to be at the event said it didn’t happen.”

“I just want to reemphasize: All four witnesses who were allegedly at the event have said it didn’t happen, including Dr. Ford’s longtime friend, Ms. Keyser.”

“It’s been investigated and all four witnesses say it didn’t happen.”

This is untrue. Dr. Blasey Ford claimed that Kavanaugh, Mark Judge, a boy named P.J., and one other boy whose name she could not recall were present at the party. She also said her friend Leland was present. Though P.J and Leland have both said they could not recall the event, neither have said that it did not happen and Leland said she believed Ford.

Kavanaugh claimed in his opening statement on September 27, “Dr. Ford’s allegations are not merely uncorroborated, it’s refuted by the very people she says were there.”

Associated Press: “THE FACTS: The statements in question do not corroborate Ford’s allegations, but they also do not exonerate Kavanaugh. They leave open the possibility that people at the small gathering forgot about it or were not in position to witness the assault.”

Kavanaugh claimed to be simply a social drinker.

Many of Kavanaugh’s high school and college classmates contest this, claiming that Kavanaugh was a heavy drinker who was often incoherent and even belligerent.

Even Trump himself admitted at a recent press conference, “He did have difficulty as a young man with drink[ing.]”

“We have heard your college roommate say that you did drink frequently…,” Klobuchar said. “Another classmate said it’s not credible for you to say you didn’t have memory lapses.”

Washington Post: “It is [correct]. The classmate was Liz Swisher, who knew him in college. She told The Post that he was a ‘sloppy drunk,’ adding: ‘There’s no medical way I can say that he was blacked out. . . . But it’s not credible for him to say that he has had no memory lapses in the nights that he drank to excess.’”

When asked about his high school year book’s reference to him being “Beach Week Ralph Club — Biggest Contributor,” Kavanaugh claimed that it was a reference to his weak stomach.

Again, according to many people who knew him in high school and college, this explanation lacks any credulity.

When Sen. Whitehouse asked Kavanaugh how do you pronounce “boofed,” Kavanaugh stated that it referred “to flatulence. We were 16.”

When asked about “Devil’s Triangle” and what it was, Kavanaugh said it was a “Drinking game.”

As the New York Times reported, “the phrase was regularly used to describe sex between two men and a woman.” As a classmate at Georgetown Prep, Bill Barbot said “the spin that Brett was putting on [the yearbook] was a complete overstatement of the innocence with which they were intended.’”

In Kavanaugh’s yearbook, some of the football players, including Kavanaugh, used the cryptic phrase “Renate Alumni.”

Kavanaugh testified that it was because “she was a great friend of ours” and attacked Democrats and the media for bringing her name into it.

Two ex-Georgetown Prep classmates told the New York Times that boys were bragging (truthfully or not, probably not) about sex with Renate.

Sean Hagan said that Kavanaugh and his teammates “were very disrespectful, at least verbally, with Renate.

Renate said, I can’t begin to comprehend what goes through the minds of 17-year-old boys who write such things, but the insinuation is horrible, hurtful and simply untrue. I pray their daughters are never treated this way.”

With respect to Kavanaugh’s yearbook reference of being a “Renate Alumnus,” Kavanaugh claimed it was to show “affection” because she was a friend.

Kavanaugh claimed to have ““no connections” to Yale, explaining that “I got there by busting my tail.”

In fact, Kavanaugh’s grandfather attended the school and Kavanaugh would be classified as a legacy student.

As Feinstein has detailed, “According to a memo from the National Archives, Brett Kavanaugh instructed Hickman Ewing, a colleague and deputy independent counsel in the Starr investigation, to ‘call [Chris] Ruddy’ about matters before a grand jury, which would be illegal to disclose.”

Kavanaugh said that polygraph tests are “not reliable.”

Sen. Kamala Harris asked Kavanaugh if he had watched Ford’s testimony and Kavanaugh responded, “I did not. I plan to, I plan to, but I did not, I was preparing mine.”

A committee aide told The Wall Street Journal that Kavanaugh was watching Ford testify from a monitor in another room in the Dirksen Senate Building.