In A Unhinged Interview, Kanye Says He Wants To Set Up A Meeting Between Trump And Kaepernick 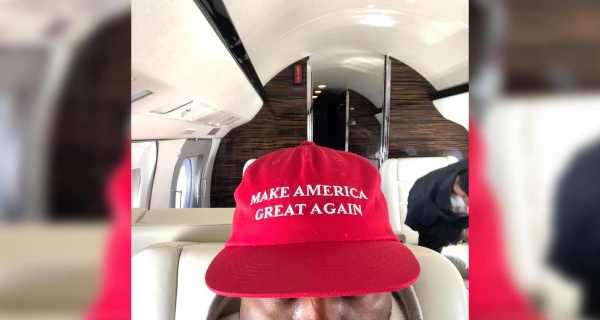 Kanye West says he is busy setting up a meeting between President Donald Trump and Colin Kaepernick.

West made this claim in a preview for his TMZ Live appearance on Monday, stating that he had no idea whether either of the men were interested in the sit-down but he was hoping to bring the two together.

Kaepernick began kneeling to protest police brutality against members of the black community and subsequently found himself unemployed, despite carrying a higher quarterback rating than almost 75 percent of the league last season.

President Trump meanwhile had called for the league to fire 'son of b*****s' like Kaepernick for disrespecting the flag.

This comes one day after West said he is going to do more research on the 13th Amendment following an outcry over his demand that it be abolished because it is 'slavery in disguise'.

The rapper struggled to explain a series of weekend tweets when he was asked to expand on his concerns about the 13th Amendment - which outlawed slavery.

After a controversial appearance on Saturday Night Live, he took to Twitter to call for the amendment to be abolished.

Alongside a selfie of himself wearing a Make America Great Again cap, Kanye wrote: 'We will provide jobs for all who are free from prisons as we abolish the 13th amendment.'

He later added: 'The 13th Amendment is slavery in disguise meaning it never ended. We are the solution that heals.'

Minutes later, he clarified: 'not abolish but. let's amend the 13th amendment We apply everyone's opinions to our platform.'

But when a TMZ reporter who caught up with Kanye outside Mel's Diner in West Hollywood on Sunday asked him to elaborate further, the singer admitted he had to study before he could answer.

In a rambling interview, Kanye also touted a bizarre conspiracy theory that Abraham Lincoln may have been a black man.

But when he was asked to explain which parts of the 13th Amendment he wished to amend, Kanye said: 'You know what? Let's open up the conversation and do some more research.

'I'll do some more research and I'll talk again.'

When pressed, he added: 'I won't be beaten into submission of having lack of information on camera.'

Referencing an upcoming appearance on TMZ Live, he added: 'I'm gonna go and build up the information and I'll speak... tomorrow about it.'

In a nearly three-minute conversation, Kanye admitted that his 'slavery in disguise' comment was something that needed to be researched.

'What I was saying is that the 13th Amendment is really slavery in disguise and it's something that we need to look into.

'The principals that wrote the Constitution were Thomas Jefferson, James Madison, Thomas Paine, and John Adams – all white men. No women, no Jews, no black men. And we need to look at it. We need to examine it. One of the things about me tweeting about the First Amendment is the right to free speech.

Alec Baldwin, who plays President trump on SNL, went after the rapper on Twitter one day after his comment.

'Dear Kanye, Your support of Trump is certainly your right. And the expression of any political ideas and support of candidates, so long as the violation of individual rights is not involved, can only strengthen our system,' wrote Baldwin.

'But I believe that many people, perhaps most people in America, are either on to you or don’t care. U are a rich entertainer. A man with tremendous wealth and a wide audience who appears to have adopted Trump’s belief that wealth and celebrity alone are signs of character.'

'And that's why we're in America. That's why America is great because I can sit here in front of this diner right now, what is this, Mel's, and I suggest the chicken wings, they're fire.'

But when the reporter pointed out that the 13th Amendment was passed in 1865 – long after the Constitution was ratified, Kanye was again apparently stumped.

'Neither of us are scholars,' he said.

'You've heard that? So I can't say that Lincoln was black or white.'

It comes after the singer announced he now wants to be called Ye shortly before he appeared on SNL.

He performed with fellow rapper Lil Pump dressed as water bottles, drawing an overwhelmingly negative reaction on social media where a number of professed fans questioned his creative direction.

He closed the show by singing a track off 'Ye' while wearing one of President Donald Trump's signature red Make America Great Again caps.

After the live show ended, West stayed on the microphone and gave an impromptu speech about politics, again voicing his support for the president.

'So many times I talk to a white person about this and they say, 'How could you like Trump? He's racist,'' he said, according to footage posted on Instagram by comedian Chris Rock.

'Well, if I was concerned about racism, I would have moved out of America a long time ago.'

He also accused the rival Democratic Party of seeking to keep people dependent on welfare payments and repeated his interest in running for president himself in 2020 - when Trump would face re-election.

His speech was met with a smattering of applause but louder booing from the New York audience.

One New Yorker who didn't seem to mind though was Trump himself, who tweeted out his support Sunday - even though he claimed he had not seen the show.

'Like many, I don't watch Saturday Night Live (even though I past hosted it) - no longer funny, no talent or charm,' wrote Trump.

'It is just a political ad for the Dems. Word is that Kanye West, who put on a MAGA hat after the show (despite being told 'no'), was great. He's leading the charge!'

An hour later, Trump randomly declared his confidence in winning the 'Black Vote' - despite the fact he only claimed eight percent of the black vote in 2016.

'So if African-American unemployment is now at the lowest number in history, median income the highest, and you then add all of the other things I have done, how do Democrats, who have done NOTHING for African-Americans but TALK, win the Black Vote? And it will only get better!' he tweeted on Sunday.

'We will no longer outsource to other countries. We build factories here in America and create jobs.

'We will provide jobs for all who are free from prisons as we abolish the 13th Amendment. Message sent with love.'

Many fans replied to his tweets with direct excerpts from the 13th Amendment, asking him to explain his musings more directly.

The amendment reads: 'Neither slavery nor involuntary servitude, except as a punishment for crime whereof the party shall have been duly convicted, shall exist within the United States, or any place subject to their jurisdiction.'

One user @King_Yunn wrote: 'Saying abolish the amendment that also help (sic) abolish slavery without being specific on what you mean by abolishing it...is him purposely being indirect for drama?'

Another follower @AlishaFruits wrote: 'There's a hundred different ways he could've said it without sounding like an uneducated fool and stirring up unnecessary controversy, but that's all he's got.'

One of the sharpest rebukes came from actor Chris Evans, who tweeted: 'There's nothing more maddening than debating someone who doesn't know history, doesn't read books, and frames their myopia as virtue.

Arguably the most prominent theory posed was that West's critique of the 13th Amendment is centered on a specific clause in the writing which says people who have been convicted of a crime can still be enslaved.

One Twitter user behind this theory, @LBS4L, wrote: 'he's obviously referring to the 'as a punishment for crime' part. there is a reason why the US has the most prisoners total and per capita. it's because prison labor is akin to modern day slavery. he has talked about this in his music before (sic).'

Such an explanation is supported by the fact that during his SNL performance West wore a sweatshirt with the words 'FREE HOOVER' written across the front.

The sweatshirt is available for sale at $90 on Kanye's online store.

It's not the first time West has shared controversial opinions about slavery.

The rapper sparked outrage in May when he called slavery a 'choice' during an interview with TMZ.

'You were there for 400 years and it's all of y'all. It's like we're mentally imprisoned.'

It wasn't until months later that West finally apologized for the outburst during a radio appearance in late August.

West told WGCI he never 'approached or addressed the slavery comment fully' because 'it's not something for me to overly intellectualize'.

He then apologized for how his tone and how his actions, including wearing the MAGA hat on several occasions, have affected his fans.

'I'm sorry for the one-two of the MAGA hat into the slavery comment. And I'm sorry for people who felt let down by that moment,' he said.

Fans praised what appeared to be a heartfelt apology, but were in for another let down when West unveiled his redesigned version of the red cap bearing Trump's 2016 campaign earlier this week.

He told Fader that he had added 'positive energy' to the hat by flattening the brim and changing its shape slightly.

Kanye has stunned fans by becoming one of the few celebrities - as well as one of the only prominent African Americans - to support Trump.

He went to visit Trump in 2016 shortly after the rapper disappeared to seek mental health treatment.

Kanye recently promised that a new album, called 'Yahndi,' would come out on Saturday but no work immediately appeared.