Kanye West Is Booed As He Goes On Pro-Trump Rant 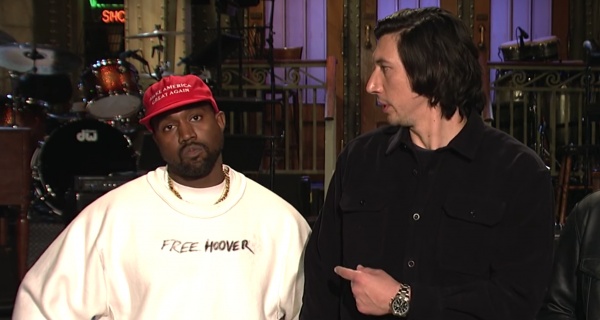 Live from New York, it’s Kanye West — with some opinions to share.

The 'Wouldn’t Leave' rapper, 41, wrapped up the season premiere of Saturday Night Live with a third musical performance and a lengthy speech about his support of President Donald Trump that did not make it to air.

He started off by singing, “I wanna cry right now. Black man in America, you’re supposed to keep what you feel inside right now. And the liberals bully you and tell you what you can and cannot wear, where you and they can’t not stare. And they look at me and say, ‘It’s not fair. How the hell did you get here?’ Well…”

Wearing a Make America Great Again hat, he then delivered an unexpected speech in front of SNL performers like Colin Jost and host Adam Driver as some audience members booed. “Actually, blacks weren’t always Democrats,” he started. “It’s like a plan they did to take the fathers out the homes and promote welfare. Does anybody know about that? That’s the Democratic plan.”

After receiving sparse claps, West continued, “And what this shows is we can’t be controlled by monolithic thought. You can’t always have when you have a black subject matter like Cosby that you have to have a black comedian talk about it.”

Motioning to SNL funnyman Michael Che, West said, “You know what I mean?”

West, who replaced Ariana Grande as the musical guest after she had to drop out, said, “It’s so many times that I talk to a white person about this, and they say, ‘How could you support Trump? He’s racist.’ Well if I was concerned about racism, I would have moved out of America a long time ago. We don’t just make our decisions off of racism. I’ma break it down to you right now: If someone inspires me and I connect with them, I don’t have to believe in all they policies.”

The Kardashian crew was out in full force to show support for the performance: West’s wife Kim Kardashian West, 37, and daughter North, 5, danced along to his performances during the show, and Kourtney Kardashian, 39, and Scott Disick, 35, were also in attendance for the spectacle.

Chris Rock recorded West’s speech on his Instagram Story and seemed to whisper at one point, “My God.”

He removed his MAGA hat before putting it back on. “Or I’ma put my Superman cape on, which means you can’t tell me what to do,” he said. “Follow your heart and stop following your mind. That’s how we’re controlled. That how we’re programmed. If you want the world to move forward, try love.”

West ended with an expression of gratitude. “Thank y’all for giving me this platform,” he concluded. “I know some of y’all don’t agree. But y’all be goin’ at that man neck a lot, and I don’t think it’s actually that helpful. I think the universe has balance. 90 percent of news are liberal. 90 percent of TV, L.A., New York, writers, actors, rappers, musicians. So it’s easy to make it seem like it’s so, so, so one-sided. And I feel kind of free. I thought this country said I couldn’t be me.”

An audience member yelled, “I love you, Kanye,” to which West responded, “I love me, too!”

West’s affection for Trump is well-known: He has stepped out in red MAGA hats before and called Trump “my brother” in a tweet in April.

In a series of pro-Trump tweets, West wrote in April, “You don’t have to agree with trump but the mob can’t make me not love him. We are both dragon energy. He is my brother. I love everyone. I don’t agree with everything anyone does. That’s what makes us individuals. And we have the right to independent thought.”

The feeling is mutual: That month, Trump praised West on Fox & Friends.

Trump added, “He sees that stuff, and he’s smart. He says, ‘Trump is doing a much better job than the Democrats did.’”