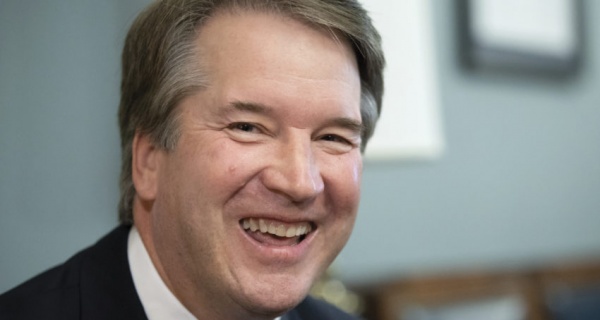 Date Posted: Wednesday, September 26th, 2018
There is now a third Brett Kavanaugh accuser. Following up on a promise to present damning information regarding President Trump’s Supreme Court nominee this week, Michael Avenatti on Wednesday morning tweeted a sworn declaration from one of his clients detailing a slew of disturbing allegations against Kavanaugh. The statement claims that Kavanaugh and Mark Judge on multiple occasions allegedly drugged and raped women at house parties during the 1980s.
Below is my correspondence to Mr. Davis of moments ago, together with a sworn declaration from my client. We demand an immediate FBI investigation into the allegations. Under no circumstances should Brett Kavanaugh be confirmed absent a full and complete investigation. pic.twitter.com/QHbHBbbfbE
— Michael Avenatti (@MichaelAvenatti) September 26, 2018
Avenatti’s client is a government employee named Julie Swetnick, who attended high school in the Washington, D.C., area at the same time as Kavanaugh. She wrote of how Kavanaugh and Judge were “joined at the hip,” and how she claims to have witnessed them “drink excessively and engage in highly inappropriate conduct” at several house parties. According to Swetnick, Kavanaugh allegedly engaged in “abusive and physically aggressive behavior toward girls,” which included both “demeaning” verbal abuse and physical contact to which they did not consent. She claims that other witnesses can corroborate her accounts of Kavanaugh’s behavior at the time.
Swetnick also alleges that Kavanaugh, Judge and others made efforts to spike the punch at house parties with “drugs and/or grain alcohol” in order to “cause girls to lose their inhibitions,” and that on multiple occasions this was done so women “could then be ‘gang raped’ in a side room or bedroom by a ‘train’ of numerous boys.” She alleges seeing boys lined up outside of rooms at house parties, waiting their “turn,” including Kavanaugh and Judge. Swetnick claims that in “approximately 1982,” she was the victim of one of these gang rapes, and that Kavanaugh and Judge were present. “I declare, under penalty of perjury and under the laws of the United States of America, that the foregoing is true and correct,” she concluded.
Swetnick began her declaration by outlining her role in government, noting that she holds active clearances related to the Department of the Treasury, the U.S. Mint and the Internal Revenue Service. Not only would she face perjury charges if her statement is found to be incorrect, it would end her career.
I have no idea if Julie Swetnick is telling the truth. I can say this: submitting a sworn affidavit carries with it criminal liability if she perjured herself. Also, as a clearance holder, giving perjured statements would be a career-ender. Take that for what it's worth.
— Bradley P. Moss (@BradMossEsq) September 26, 2018
Kavanaugh responded shortly after Swetnick’s accusations were made public. “This is ridiculous and from the Twilight Zone,” he said in a statement. “I don’t know who this is and this never happened.”
President Trump responded as he is wont to do, calling Avenatti a “third rate lawyer” and a “total low-life.”
Avenatti is a third rate lawyer who is good at making false accusations, like he did on me and like he is now doing on Judge Brett Kavanaugh. He is just looking for attention and doesn’t want people to look at his past record and relationships – a total low-life!
— Donald J. Trump (@realDonaldTrump) September 26, 2018
Swetnick is now the third woman to accuse Kavanaugh of sexual misconduct, following Ford — who claims Kavanaugh violently assaulted her at a house party during the period described by Swetnick — and Deborah Ramirez — who claims Kavanaugh exposed himself to her, causing her to touch his penis against her will, while they were both freshmen at Yale. Ford will testify before the Senate Judiciary Committee on Thursday. “The allegation of sexual misconduct is completely inconsistent with the rest of my life,” reads Kavanaugh’s opening statement. “The record of my life, from my days in grade school through the present day, shows that I have always promoted the equality and dignity of women.”