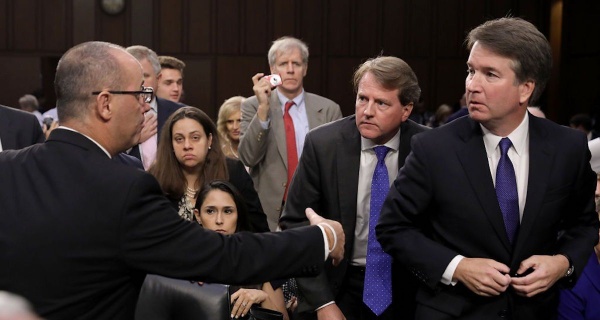 After a raucous opening to his Senate confirmation hearing, Supreme Court nominee Brett Kavanaugh appeared to go out of his way to demonstrate once and for all that he is a heartless scumbag, one who can’t be bothered to display common decency to a bereaved father who lost his child at a school shooting

As the Senate Judiciary Committee broke for a brief break on Tuesday afternoon, Fred Guttenberg—father of Jamie Guttenberg, who was murdered at Marjory Stoneman Douglas High School, in Parkland, Florida—attempted to introduce himself to Kavanaugh and shake the nominee’s hand.

As you can see from footage of the incident, not only did Kavanaugh not shake Guttenberg’s hand, he stared him down for several seconds before conspicuously walking the other direction:

To add insult to injury, White House Deputy Press Secretary Raj Shah who, along with White House Counsel Don McGahn, has been leading the administration’s nomination fight, attempted to blame the obvious snub on Capitol Hill police:ontrary to Shah’s description of an “unidentified individual,” however, Guttenberg said he had been introduced to the committee chambers by Senator Dianne Feinstein earlier in the day.

Given the constant drumbeat from conservatives that Kavanaugh is a “nice person” and consummate family man, you might think that grotesquely snubbing a grieving parent would be particularly shocking about face. But given that this is someone who has made a career of expanding gun rights and firearm ownership, perhaps he couldn’t handle the shame when presented with an actual example of what that translates to in the real world.