Mitch McConnell Ignores Decency In His Quest For A Conservative Court 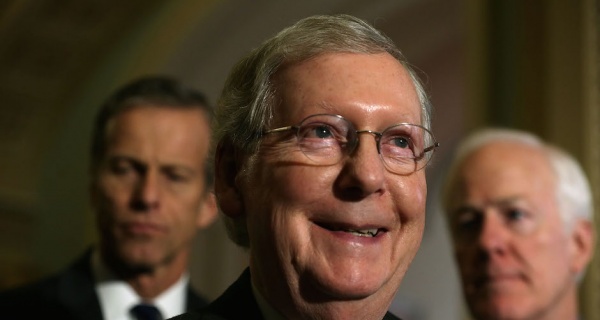 Mitch McConnell doesn’t appear to care if there is truth to the allegation that Brett Kavanaugh sexually assaulted Christine Blasey Ford. The Senate majority leader said as much Friday morning while speaking to attendees of the Value Voters Summit in Washington, D.C. “You’ve watched the fight. You’ve watched the tactics. But here’s what I want to tell you: In the very near future Judge Kavanaugh will be on the United States Supreme Court,” McConnell said.

“Keep the faith. Don’t get rattled by all of this. We’re going to plow right through it and do our job,” he added in reference to the allegation that Kavanaugh trapped Ford in a room, pinned her to a bed, groped her, tried to strip her naked and covered her mouth when she tried to scream.

Relative to other Senate Republican leaders, McConnell had been largely silent since this past Sunday, when the Washington Post published an interview with Ford about the allegation. He did, however, sound off on the need to confirm Kavanaugh while speaking on the Senate floor a day after the details of the allegation were made public. “Now an accusation of 36-year-old misconduct dating back to high school has been brought forward at the last minute in an irregular manner,” he said after detailing the nominee’s qualifications. This would normally be time to point out McConnell’s hypocrisy at calling anything “irregular” when in 2016 he led an effort to stonewall Merrick Garland’s confirmation for nearly a year. But crying foul over the majority leader’s dirty tactics has become a tired exercise. It doesn’t matter because he simply doesn’t appear to care. Nor do any of the other complicit Senate Republicans. It’s hard to accept, but this is now the way things are. Shame is a relic of a bygone era.

A day after speaking on the Senate floor, McConnell tweeted about the Democrats’ lack of “sensitivity.”

On Monday, Politico released a report detailing how McConnell has been working behind the scenes to push Kavanaugh through in the face of Ford’s accusation. Because the GOP’s majority in the Senate is so slim, McConnell has been forced to quell concern from senators like Jeff Flake (R-AZ) and Susan Collins (R-ME), who feel Ford should be given an opportunity to testify. Senate Judiciary Committee Chairman Chuck Grassley (R-IA) ultimately invited her to speak under oath next week. Though several senators then expressed a desire to hear what she has to say, many hardened up when on Tuesday Ford argued in a letter to Grassley that the FBI should first investigate the allegation. “After learning of the allegation, Chairman @ChuckGrassley took immediate action to ensure both Dr. Ford and Judge Kavanaugh have the opportunity to be heard, in public or private,” tweeted Sen. Bob Corker (R-TN). “Republicans extended a hand in good faith. If we don’t hear from both sides on Monday, let’s vote.”

In a thinly veiled show of disgust, Sen. Lindsey Graham (R-SC) offered that he’ll “listen to the lady, but we’re going to bring this to a close.” On Wednesday, he tweeted that “it is imperative the Judiciary committee move forward on the Kavanaugh nomination and a committee vote be taken ASAP.” He didn’t elaborate on why there is such a pressing need to confirm a nominee about which there are so many outstanding questions.

Grassley and Sen. Orrin Hatch (R-UT) tried to argue that the FBI investigation Ford requested was outside of the agency’s purview. They both know this to be false, as they were on the Senate Judiciary Committee back in 1991 when George H.W. Bush ordered an investigation of Antia Hill’s claim that she was sexually harassed by Clarence Thomas. “There is no reason for any further delay,” Grassley wrote in a statement after Ford floated the idea of an investigation. “We should proceed as planned,” tweeted Hatch.

It shouldn’t take quotes from sources close to the situation to understand that the GOP cares about nothing more than confirming Kavanaugh as soon as possible. Regardless of the timing of its publication, Ford’s allegation is explosive, and there’s no reason to believe it isn’t credible. A therapist has notes about her bringing it up during a couples therapy session in 2012, and some of her friends have corroborated that she has mentioned the incident in the past. Her life has been turned upside down since her name was made public. She had nothing to gain from this. If Republican senators cared at all whether a potential United States Supreme Court justice committed a violent sexual assault, they would join Ford and Democrats in pushing for an investigation. This isn’t partisan. It’s common sense.