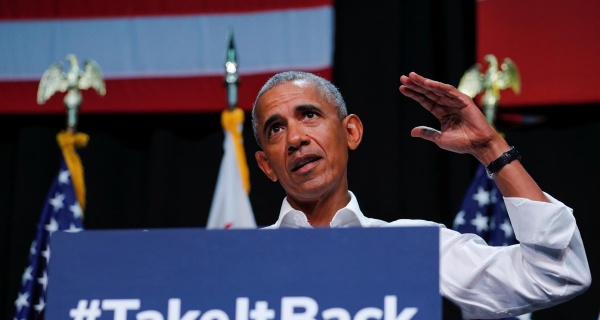 Former President Barack Obama claimed responsibility for the booming economy and launched a scathing attack on Donald Trump as a threat to democracy.

The 44th US president also branded his successor a 'demagogue' who was part of the culture of 'celebrating bullies'.

Speaking to a crowd of thousands in a school auditorium in Cleveland, Ohio, yesterday, Obama lashed out at Trump's tax cuts for 'the most wealthy and powerful' and said the policy would damage the economy in the long run.

While backing Ohio's Democratic gubernatorial nominee Richard Cordray, the former commander-in-chief claimed responsibility for the current state of the US economy and said the upturn in growth started on his watch.

Walking on stage to U2's City of Blinding Lights, Obama pleaded with the audience, 'we have a chance to restore some sanity to our politics...because you are the only check on bad policy'.

Trump has repeatedly made record low unemployment and the strong American economy the centerpiece of his administration.

On Monday he tweeted: 'The Economy is soooo good, perhaps the best in our country's history.'

But to a cheering crowd last night, Obama slammed Trump's economic policy and said the boom began under his presidency adding, 'just remember when it started'.

He also criticized Trump for his subsidy for 'corporate polluters' with a hand out of '1.5 trillion dollars in tax credits', that would have to be fixed by 'a Democrat like me coming back in'.

Obama also declared that Americans are 'supposed to stand up to bullies, not follow them' and railed against the 'post-truth' era.

He said: 'Some things are complicated, when I was president I was confident the American people wanted the truth.

'When there's a vacuum in our democracy, when we don't vote, when we take our basic rights for granted - other voices fill the void and demagogues who promise simple fixes to complicated problems.'

He also said the current administration makes it harder for 'minorities, young people and poor folks' to vote.

Although he didn't blast President Donald Trump by name, he slammed the current administration saying: 'This is not normal what we're seeing. It is radical.'

He said: 'Even the folks who won don't seem happy. Have you noticed that?

Obama said Republicans, 'appeal to our tribal instincts. They appeal to fear. They try to pit one against another.

'They try and say border security, 'we'll keep out those folks who don't look like us or sound like us'.

'That's a playbook as old as time. In a healthy democracy, that playbook doesn't work.'

He also warned against voter indifference, saying it was the biggest threat to democracy, adding, 'if you don't like the direction of the country, you can't just get angry.

'You will read quotes from Republicans saying, 'Wow, this is messed up.' Well, why aren't you doing something about it? 'Well, we can't, because we really like these tax cuts for the wealthy. … So we'll put up with crazy,'' he said during his speech.

Democrats hope to seize back control of the office in Ohio for their party, which is out of power at every level of Ohio government and take Republican Governor John Kasich's seat.

Obama also appeared with US Senator Sherrod Brown who faces a challenge from Republican Jim Renacci, a congressman from Wadsworth.

The appearance is part of a swing across the country by Obama to boost Democrats' efforts to win House seats and state elections.

He's been crisscrossing the nation urging voters to head to the polling stations, particularly spending time in red areas.

'We have a chance to restore some sanity to our politics. We can tip the balance of power back to the America people - because you are the only check on bad policy. You're the only real check on abuses of power.

'I don't know when we started celebrating bullies, instead of looking after people who care for other people. When did that happen?

'What's at stake goes behind partisan politics. People of both parties should be concerned about our current course and the basic institutions of our democracy, and should want to see a restoration of honest, decency and lawfulness to our government. And should want to see some checks and balances on what's happening right now.

'At a time when there's a lot of change going on, demographic shifts and technological changes, and there's rising inequality, and people's lives have been disrupted, and they start worrying about whether their lives will be passed on to their children.

'The biggest threat to our democracy is cynicism. There needs to be a restoration of honesty and decency and lawfulness in our government.

'People are stressed they are angry, all the chatter and anger on television doesn't match up to their lives and it breaks our civic trust and it makes people think the game's rigged and nobody's looking out for them and historically those kinds of divisions, that's ripe for opportunists trying to exploit America's history of division - racial, ethnic, religious.

'Politicians try to keep us angry, and they appeal to our tribal instincts and appeal to fear and they try to pit one against the other and they tell us 'we need security from those folks who don't look like us or prey like us'.

'That is an old playbook, it's as old as time, and as it gets closer to election day you can rely on more and more politicians to pull out that playbook.

'And here's the thing, in a healthy democracy that playbook doesn't work, if there's a democracy where everyone is participating and paying attention and listening and voting, people of both parties call out the fear mongers and then they work to compromise and to get things done.

'But when there's a vacuum in our democracy, when we don't vote, when we take our basic rights for granted other voices fill the void and demagogues who promise simple fixes to complicated problems.

'Some things are complicated, when I was president I was confident the American people wanted the truth - wanted to know what was what.

'They'll promise to fight for the little guy when they're pandering to the most wealthy and powerful and they'll say they are fighting corruption and they start undermining those institutions that are most essential to our democracy.

'They try to threaten free speech and start unwinding campaign finance laws and make it harder for young people and minorities to vote and poor folks to vote. They subsidize corporate polluters and hand out 1.5 trillion dollars in tax credits without saying how they will pay for them.

Partly because they figure when a Democrat like me has to come back in and clean up this stuff, they say ' oh these deficits are terrible' and 'that's why we have to cut medicare'. What happened to all this concern about deficits?'