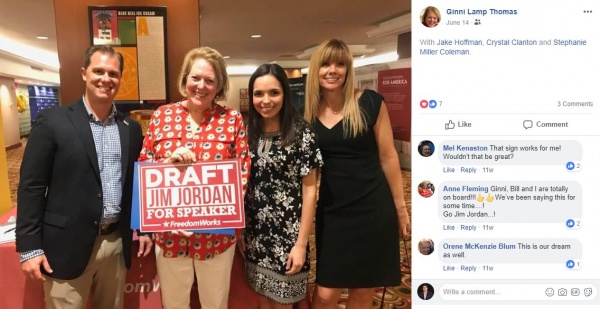 Conservative activist Crystal Clanton, who was forced to leave the right-wing student group Turning Point USA last year after her racist comments were revealed, was hired by the wife of Supreme Court Justice Clarence Thomas, Mediaite has learned.

Clanton’s racist comments were made known publicly after the New Yorker obtained screenshots of text messages in which she wrote, “I HATE BLACK PEOPLE. Like fuck them all . . . I hate blacks. End of story.”

Clanton served as TPUSA’s second-in-command — just below the group’s founder Charlie Kirk — for five years, before she left late last year after the nonprofit was made aware of the text messages and learned that they would be used in a story, according to multiple sources who spoke to Mediaite.

Shortly after she left TPUSA, Clanton was hired by Ginni Thomas — the wife of the only black Supreme Court Justice currently serving on the bench — to assist with her right-wing media ventures.

Clanton, Ginni Thomas, and Clarence Thomas were contacted for comment on this story, but they did not immediately respond.

“A True Honor to have videoed Donald Trump, Jr. — a real class act — today at the Trump Hotel for my next video interview coming at Daily Caller this weekend!” Ginni Thomas posted on Facebook in January. “Hat Tip to Crystal Clanton (who makes every day better and more fun!) for snapping some pictures too of our interviewee, and Sean Moody, our videographer!”

Ginni Thomas’ interview — which Clanton aided in the production of — occurred just over a month after Clanton’s racist comments were made public in the pages of the New Yorker.

Since then, Clanton has traveled to numerous events with Ginni Thomas.

According to several sources with direct knowledge, the ex-TPUSA staffer attended this year’s Conservative Political Action Conference with the Supreme Court justice’s wife. Additionally, Thomas and Clanton went to Dallas, Texas in June and paid a visit to TPUSA’s Young Women Leadership conference where the two posed for photos with activists and TPUSA staffers, as well as advocated for the ultra-conservative Rep. Jim Jordan (R-OH) to be the next Speaker of the House.

Ginni Thomas currently serves on TPUSA’s advisory board and spoke at the nonprofit’s Women’s Summit in 2017.

Clanton “always idolized Ginni,” one source told Mediaite. She flaunts her relationship with the Thomases to conservative friends as a way to prove that the New Yorker‘s publication of her racist text messages did not ruin her career, other sources said. In July, Clanton shared a photo on Instagram of herself, Thomas, and Ginni Thomas having a “great weekend” together.

Clanton’s anti-black comments, however, are not the extent of her controversial remarks.

Numerous sources who worked with Clanton detailed how she would exchange racist remarks regularly with other TPUSA staffers — including Alana Mastrangelo, who currently works for the group, and Timox Prax, who was allegedly forced out of TPUSA this year over “bigoted” remarks — using Snapchat.

One such message reviewed by Mediaite features a photo of a man who appears to be Arab and a caption written by Clanton that reads, “Just thinking about ways to do another 9/11.” (The source who provided Mediaite with the image requested it not be published to protect their anonymity.)

To keep up with their “Snapstreaks” — a feature in the app that counts how many consecutive days two users have used the app to communicate with each other — Clanton, Prax, Mastrangelo, and others would often send similar anti-Muslim messages that included remarks like “a bacon a day keeps the Islams away” and “Ramadan bombathon,” as well as taking pictures of their heads wrapped in towels to mock head coverings commonly worn by Arabs, according to sources who received the messages.

Clanton, Prax, and Mastrangelo were all contacted for comment on this story, but they did not respond to multiple requests.

During her time at TPUSA, Clanton was known as Charlie Kirk’s “enforcer,” per one source. Another person that worked with her joked that Clanton was “the person who made the trains run on time,” a reference to the common myth about fascist dictator Benito Mussolini using harsh policies to ensure efficiency in his country.

This meant that Clanton was in charge of “literally everything” — the conferences, the field work, and even TPUSA’s human resources department. She ran the show without much help from Kirk, who sources say is often preoccupied with boosting his own personal brand by appearing on Fox News and pursuing other opportunities in conservative media. Clanton’s work for TPUSA earned her high praise in Kirk’s 2016 book, Time for a Turning Point: Setting a Course Toward Free Markets and Limited Government for Future Generations, in which he calls her “the best hire we ever could have made.”

“[Clanton is] integral to the success of Turning Point while effectively serving as its chief operating officer,” Kirk wrote. “Turning Point needs more Crystals; so does America.”

Other evidence of racism within TPUSA includes a HuffPost report on dozens of bigoted tweets posted by former and current staffers and a Mediaite report that revealed how TPUSA ignored its own blacklist to allow an alt-right activist who marched in the Charlottesville “Unite the Right” rally to attend their Student Action Summit last year.

As for Ginni Thomas, she has long worked in conservative media. Going back to 2009, she advocated on behalf of the Tea Party movement by forming Liberty Central, an organization designed to fight the “hard-left agenda” supposedly pushed by then-President Barack Obama. Ginni Thomas went on to create the lobbying firm Liberty Consulting where she continued supporting the ultra-conservative wing of the GOP. Since her Tea Party days, she has spoken at numerous conservative events and conferences, as well as penned columns and created videos for the Daily Caller, the right-wing website founded by Tucker Carlson. Per a Daily Beast report, Ginni Thomas responded to the Trump travel ban debacle by contacting a right-wing email list in an attempt at creating a “grassroots army for pro-Trump daily action items.”

Most recently, Ginni Thomas’ social media presence — with which Clanton assists — has taken a hard-right turn.

Hilariously, Ginni Thomas once tried to capitalize on the “Walk Away” movement — which holds that black people and other minorities are leaving the Democratic Party to join the GOP — by sharing stock photos of black people and passing them off as liberal apostates who had turned to conservatism.