Brett Kavanaugh Appears To Have Lied While Under Oath 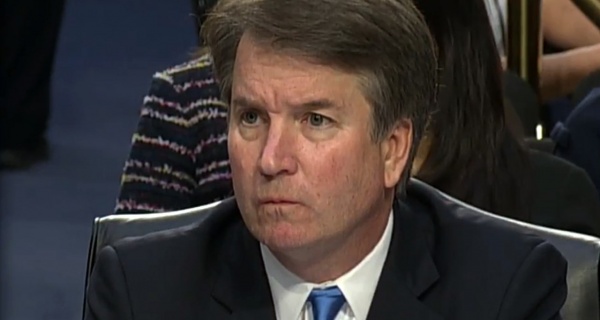 One would think that honesty and integrity would be the most basic requirements for a nominee to the country’s highest court. By those standards, however, Supreme Court nominee Brett Kavanaugh wouldn’t even be in the running. Yet, here we are.

Honesty, it seems, isn’t something Republican lawmakers are even remotely interested in when selecting the person to fill a lifetime appointment to the court.

During confirmation hearings this week, Kavanaugh was evasive, combative, rambling, dodgy, and smarmy with his answers to questions by Democratic senators attempting to sort through an obstructive amount of missing documents, documents marked committee confidential, documents dumped on them at the last minute, etc.

Mother Jones and other news outlets identified at least five times Kavanaugh appeared to lie to Congress under oath this week and in past confirmation hearings. And that’s probably not even close to an exhaustive list.

In an editorial on Friday, The New York Times stated it plainly: “Brett Kavanaugh Can’t Be Trusted.”

Now [Kavanaugh’s] being rammed through his confirmation process with an unprecedented degree of secrecy and partisan maneuvering by Republican senators who, despite their overflowing praise for his legal acumen and sterling credentials, appear terrified for the American people to find out much of anything about him beyond his penchant for coaching girls’ basketball.

Perhaps most concerning, Judge Kavanaugh seems to have trouble remembering certain important facts about his years of service to Republican administrations. More than once this week, he testified in a way that appeared to directly contradict evidence in the record.

In one of those cases, in which Kavanaugh appeared to have lied about his handling of confidential Democratic emails stolen by GOP Senate aide Manuel Miranda in the 2000s, while Kavanaugh worked for the George W. Bush administration, the former chief counsel for nominations for the ranking member of the Senate Judiciary Committee, Lisa Graves, wrote in Slate that not only shouldn’t Kavanaugh be seated on the Supreme Court, but also he should be impeached from the federal judiciary.

Graves, who wrote some of the memos stolen by Miranda and shared with Kavanaugh, stated:

During the hearings on his nomination to the D.C. Circuit a few months after the Miranda news broke, Kavanaugh actively hid his own involvement, lying to the Senate Judiciary Committee by stating unequivocally that he not only knew nothing of the episode, but also never even received any stolen material.

Even if Kavanaugh could claim that he didn’t have any hint at the time he received the emails that these documents were of suspect provenance—which I personally find implausible—there is no reasonable way for him to assert honestly that he had no idea what they were after the revelation of the theft. Any reasonable person would have realized they had been stolen, and certainly, someone as smart as Kavanaugh would have too.

And he did so repeatedly.

Other areas where Kavanaugh seems to have lied, according to Mother Jones, include his involvement in nominating the rabid anti-abortionist William Pryor—who called Roe v. Wade “the worst abomination of constitutional law in our history”— to the 11th Circuit; his involvement in a Bush-era NSA warrantless wiretapping program; his participation in discussions about so-called enemy combatants, post-9/11; his role in the nomination of controversial judicial appointee Charles Pickering; and, of course, his true beliefs about whether Roe v. Wade can and should be overturned by a conservative Supreme Court.

The Republicans engage in this sort of subterfuge for an obvious reason: While they hold unified power in Washington, most of their agenda is hugely unpopular. So they hide as much of it as possible out of a fear that if more of it came to light, they will pay at the polls. Come November, voters can make that fear come true.