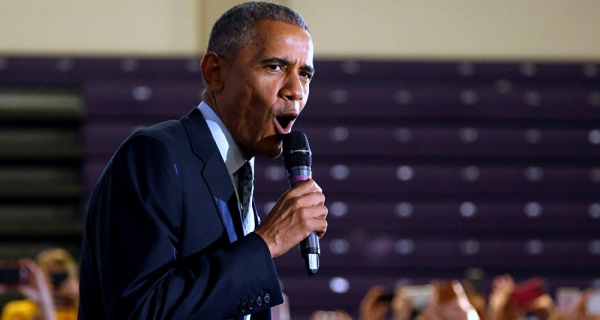 Barack Obama spoke President Donald Trump’s name for the first time to criticize his successor for fanning the flames of bigotry.

The former president criticized Trump for exploiting historic tensions to halt progress in civil rights, but he said the current president is not to blame for racism and other hateful ideas.

“It did not start with Donald Trump,” Obama said. “He is a symptom, not the cause. He’s just capitalizing on resentments that politicians have been fanning for years.”

Obama also took a shot at Trump’s claims about the economy.

“When you hear how great the economy’s doing right now, let’s just remember when this recovery started,” Obama said. “I mean, I’m glad it’s continued, but when you hear about this economic miracle that’s been going on, when the monthly job numbers come out, Republicans say, ‘It’s a miracle.’ I have to remind them and say those job numbers are the same as they were in 2015 and 2016.”

“But anyway,” he said, as the crowd laughed, “I digress.”