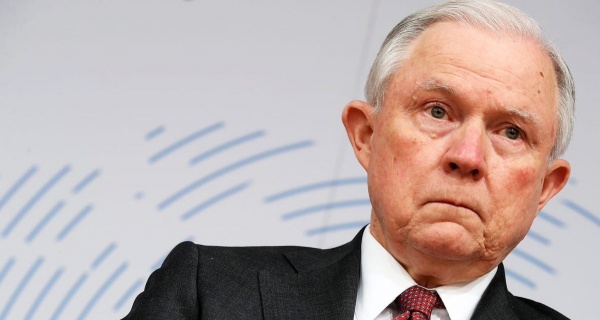 Here’s an overview of Sessions regressive policies in his time at the Justice Department.

In a memo outlining the changes, Sessions doubled down on mandatory minimums, which tie judges’ hands in sentencing and require harsh prison terms, even for nonviolent crimes. Sessions claimed he was freeing prosecutors from unjust federal control. “They deserve to be un-handcuffed and not micromanaged from Washington,” he said. “It means we are going to meet our responsibility to enforce the law with judgement and fairness.”

Even Republicans criticized the move, with Mike Lee issuing a rebuke to Sessions’ memo: “To be tough on crime, we have to be smart on crime,” he wrote.

The Muslim ban, which blocks immigration primarily from Muslim-majority countries, is one of President Donald Trump’s most controversial policies. But the Department of Justice under Jeff Sessions didn’t have qualms about supporting it. When federal judges deemed the ban unconstitutional, citing freedom of religion, Sessions wrote that Trump’s travel restrictions were “within his lawful authority to keep the Nation safe.”

Sessions’ DoJ fought hard for the travel ban, eventually taking the issue all the way to the Supreme Court. The ban was upheld.

A harsh Texas voter ID law requires voters to show an authorized photo ID (including a gun permit), or a utility bill or other identifying information to vote. Various iterations of the law went through the courts, and a judge once called it a “poll tax without the tax” pointing out that voters would be forced to incur the cost of acquiring identification just to vote.

During the Obama era, the justice department opposed the law, filing on behalf of the plaintiffs. Sessions’ DoJ dropped the lawsuit, signaling that the federal government would not oppose voting restrictions imposed by states. Voter ID laws widely discriminate against people of color low-income voters, and young people, who are more likely to vote for Democrats than older whites.

The DoJ also backed Ohio’s efforts to purge inactive voters from its rolls.

Over the summer, the Justice Department enforced a policy of zero tolerance at the border, leading the forced separation of children from their parents. Jeff Sessions said the Bible justified the policy.

“I would cite you to the Apostle Paul and his clear and wise command in Romans 13, to obey the laws of the government because God has ordained them for the purpose of order,” he said.

Sessions has blamed immigrants for the loss of high paying jobs and accused them of abusing welfare benefits. Although he’s claimed he’s merely enforcing the law in cracking down on illegal immigration, he has also called for a reduction in legal immigration.

One of the first things Jeff Sessions did upon assuming office was drastically curtail federal consent decrees with police departments around the country. Consent decrees pressure police forces with a record of abuses to pursue reforms.

Even as more lawmakers embraced marijuana legalization, Jeff Sessions doubled down on his anti-pot stance. He’s said that “good people don’t smoke marijuana” and demanded “grown-ups” in Washington declare marijuana to be a real danger.

After Sessions rescinded the Cole memo—an Obama era directive advising federal law enforcement to stop cracking down on pot in states where it’s legal—state lawmakers were inspired to push for decriminalization and legalization all over the US.

Over the summer he restated his opposition to legal pot but admitted that state law trumps federal law on the issue.

“Personally, my view is that the American republic will not be better if there are marijuana sales on every street corner, but states have a right to set their own laws and will do so, and we will follow the federal law,” he said.

Throughout his tenure, Jeff Sessions has gutted protections for LGBT people. A directive issued last October demanded that federal agencies side with religious entities who claim they have the right to discriminate against LGBT people on religious grounds.

“This is a signal to the rest of these agencies to rethink the protections they have put in place on sexual orientation and gender identity,” Robin Fretwell Wilson, a law professor at the University of Illinois at Urbana-Champaign, told the Associated Press.

Jeff Sessions has praised the achievements of “Anglo-American culture” to law enforcement agencies.

“I want to thank every sheriff in America. Since our founding, the independently elected sheriff has been the people’s protector, who keeps law enforcement close to and accountable to people through the elected process,” Sessions told members of the National Sheriffs’ Association.

“The office of sheriff is a critical part of the Anglo-American heritage of law enforcement,” he continued.

The remarks are disturbing given the history of accusations against Sessions, including that he used the n-word and made jokes about the Ku Klux Klan, deeming them “okay, until he learned that they smoked marijuana.”