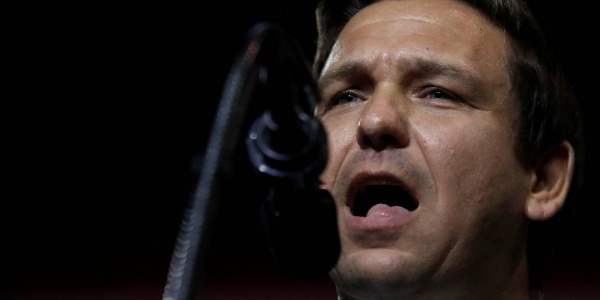 In Florida’s August 28 gubernatorial primaries, Democrats and Republicans both went with non-establishment candidates. Democrats, in a major upset, nominated Andrew Gillum, the left-of-center mayor of Tallahassee and an ally of Sen. Bernie Sanders (who campaigned for him) over centrist establishment pick Gwen Graham (daughter of former Florida Gov. Bob Graham). Meanwhile, on the Republican side, the nominee was Rep. Ron DeSantis, a Tea Party favorite, member of the House Freedom Caucus and far-right supporter of President Donald Trump (who has endorsed DeSantis). The Florida gubernatorial race could become a referendum on Sanders’ ideas versus Trump’s ideas, and DeSantis is way beyond conservative—he is extreme.

Here are five of the most disturbing things about DeSantis.

Rhetorically, some neocons draw a distinction between radical Islam and non-radical Islam; President George W. Bush denounced al-Qaeda as terrorists who “hijacked a great religion.” But David Horowitz (who runs FrontPage Magazine) considers the entire religion inherently violent, terroristic, anti-Semitic and anti-Christian—and many establishment Republicans have shied away from his annual event Restoration Weekend, which has attracted the wingnut likes of Islamophobe Pamela Gellar and Milo Yiannopoulos (formerly senior editor at Breitbart News). But DeSantis had no problem speaking at the event, where he carried on about “radical Islamic terror,” encouraged a more aggressive policy against Iran and swore to protect “western civilization”—which, among white nationalists, is code for “white civilization.”

One can tell a lot about politicians by the company they keep, and DeSantis’ company has not only included Horowitz’ Restoration Weekend, but also, an alt-right Facebook group that calls itself Tea Party, has about 97,000 members and has also been full of racist, anti-immigrant and anti-Islam comments. The Facebook group, which DeSantis has moderated, is not establishment Republican by any means—and its other administrators have ranged from Corey Stewart (the Virginia senatorial candidate who has been praising Confederate Army figures like Robert E. Lee and Stonewall Jackson) to Kelli Ward (who lost to establishment pick Martha McSally in Arizona’s recent GOP senatorial primary). The late Arizona Sen. John McCain was often called a RINO (Republican In Name Only) in that group, and in a 2016 post, far-right activist Michael Ward (Kelli Ward’s husband) claimed that McCain was a “strong supporter of the Muslim Brotherhood.

In Florida, more than 1.7 million people obtained health insurance for 2018 via the federal exchanges created by the Affordable Care Act of 2010, a.k.a. Obamacare—and DeSantis would like to take health insurance away from every single one of them. As a member of the Freedom Caucus, DeSantis has stressed that he doesn’t consider health care a right, pushed for total repeal of the ACA and taken the position that if the poor cannot afford health care, that’s their problem.

4. DeSantis Thinks Even Paul Ryan Is Too Immigrant-Friendly

After Gillum won Florida’s Democratic gubernatorial nomination, DeSantis asserted that Floridians shouldn’t “monkey this up” by electing him in November. DeSantis’ campaign has denied that the comment was a racist dog whistle, asserting that by “monkey this up,” he meant screw this up or mess this up. But DeSantis has a long history of associating with white nationalists, whether it’s Restoration Weekend or the Tea Party Facebook group that Stewart and Kelli Ward have been involved in. And DeSantis is such an anti-immigrant hardliner that he has even accused House Speaker Paul Ryan and Adam Putnam (who he defeated in Florida’s GOP gubernatorial primary) of being soft on illegal immigration. When Ryan was crafting an immigration bill in June, DeSantis declared, “I am negative towards Ryan’s bill. I think it’s a really big amnesty.”

5. DeSantis Is an Unapologetic Theocrat

To DeSantis, there should be no separation of church and state. He is on very friendly terms with the Christian Right, favors restricting abortion as much as he possibly can in Florida and has supported anti-gay measures such as the so-called First Amendment Defense Act (which was sponsored by Mike Lee in the Senate and Raul Labrador in the House of Representatives).