Trump's Streak Of Not Being Invited To A Major Event Continues 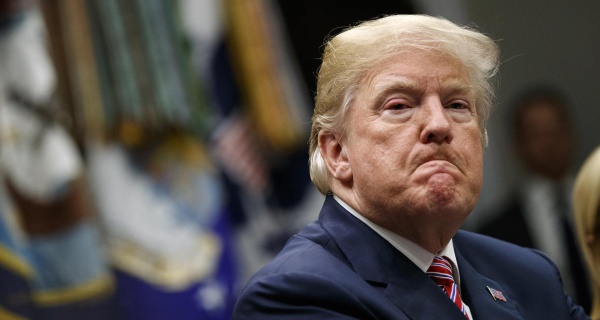 Unlike previous presidents who were expected to lend an aura of dignity and gravitas to state funerals and royal weddings as the leader of the free world, President Donald Trump has notably been absent at recent historical events.

According to the Washington Post, Trump is considered a “pariah” as evidenced by not only the late John McCain’s request that he not attend his funeral, but going back to being shunned by the royal family by not being invited to Prince Harry and Meghan Markle’s wedding.

As the Post notes, “Less than two years into first term, Trump has often come to occupy the role of pariah — both unwelcome and unwilling to perform the basic rituals and ceremonies of the presidency, from public displays of mourning to cultural ceremonies. “

In addition to not attending weddings and funerals — including the recent funeral of First Lady Barbara Bush — Trump did not attend a recent Kennedy Center Honors after three of the recipients said they would boycott if he was present.

“We’ve kind of elected this apex predator, and you don’t sit T-Rex down at the dinner table,” explained Alex Castellanos, a GOP strategist. “I think civilized society doesn’t want him behaving crudely at the dinner table, and he has no interest in their pretensions.”

Trump has also been shunned by athletes who, during past administrations made White House visits following national championships a national ritual, with the Post reminding, “In June, for example, the president hastily disinvited the entire Philadelphia Eagles team from a White House event in honor of their Super Bowl championship after growing frustrated that, to protest some of his policies, the team had planned to send only a small delegation of players.”

According to Tim Naftali, a presidential historian at New York University, Trump’s exclusion from high profile gatherings is notable.

According to frequent Trump critic and GOP consultant Rick Wilson, Trump’s poor handling of the death of McCain is a manifestation of his narcissism.

Andrew H. Card, chief of staff under President George W. Bush, agreed that Trump has a problem while stating that the office of the president deserves more respect than Trump is receiving.

“When the president doesn’t appear welcoming, it’s his problem, he’s created a problem,” Card explained. “When others refuse to accept an invitation, I think that’s wrong.”

“I do think the president gives permission for what I would consider to be rude behavior,” Card added, “and yet he reacts so poorly to other people’s rude behavior.”