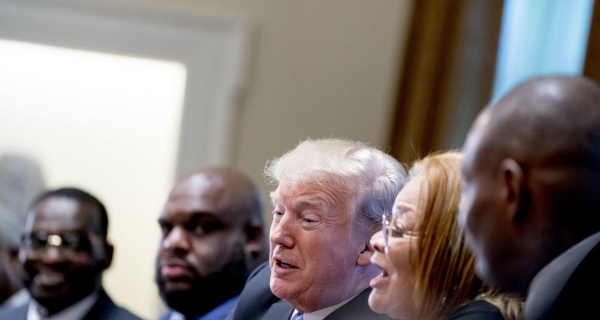 Donald Trump invited some black pastors to the White House. They just sat there and told him how great he was. I have some Bible reading for them.

I don’t mean there is distaste for his policies and his Twitter outbursts. I’m talking about a feeling of anger that knows no bounds.

Sure, it’s easy to find a small percentage of African Americans who swear allegiance to him and the Republican Party, but for black folks in general, Trump is a name that is more despised than Supreme Court Justice Clarence Thomas, and that is no small feat.

*Calling Rep. Maxine Waters names and saying she has a low IQ;

*Failing to properly condemn the white racists in Charlottesville; hiring numerous folks in his administration with racial animus;

*Doubling down on the guilt of the Central Park 5, all minority men who were exonerated for a brutal rape that divided New York City in the 1980s. Trump contributed to this by taking out newspaper ads calling on the young men to get the death penalty;

*Refusing to apologize for birtherism and the attacks on the citizenship of President Barack Obama;

That’s why when a group of “inner-city pastors”—that was how the White House labeled it on the transcript—met with Trump recently, the criticism from black America was fast and furious.

Many were most angry with Cleveland pastor Darrell Scott, a staunch Trump supporter, for saying he was the most pro-black president he had ever seen in his lifetime.

But it was the feeble genuflecting of the other pastors at the feet of Trump in the meeting that raised the ire of black folks. Here is a sample of their opening comments when the video cameras were allowed in:

Rev. Jon Ponder, Las Vegas: “First of all, Mr. President, I’d like to thank you for recognizing me on the National Day of Prayer,” and later, “We just thank you for the direction that the country is going in, and specifically as our partnerships with law enforcement are beginning to grow.”

Rev. Wilfredo De Jesus, Chicago: “First of all, let me just say thank you for your boldness. Thank you for taking a stand for those that are disenfranchised.”

Rev. Van Moody, Montgomery, Ala: “Thank you for being compassionate and caring about all people.”

Pastor Phillip Goudeaux, Sacramento: “I guess the greatest word I can say for you, Mr. President, is that you have given this country expectations, given us a new hope, a new excitement to believe that things are getting better and going to get better. And we appreciate that leadership—your tenacity to keep pushing in against all the opposition that comes against you. Thank you so much.”

Julian Lowe, Los Angeles: “I’ve very grateful for this administration and for you personally.”

Pastor Marvin Winans Jr., Detroit: “To hear you talking about, you know, keeping that in communities, I think, is super important. And I’m just happy for this opportunity. And just God bless you and everything you’re doing.”

What rankles black folks is the genuflecting to the feet of Trump, and not any effort to hold him accountable for his words and actions.

The job of pastors isn’t to go to the White House and kiss the ring of the president of the United States. It is to bring a prophetic Word into a partisan and political setting. And there is biblical precedent for this.

When King David slept with Bathsheba and sent her husband, Uriah, to the front lines of battle where he was killed, it was the prophet Nathan who told the king he was wrong and God would hold him accountable for his actions.

When Saul was anointed King, it was the prophet, Samuel, who God commissioned to do so. And when Saul continued to run afoul of God’s directives, Samuel was sent to speak truth and power to him.

Why did Nathan and Samuel talk to kings this way? Because they served a higher power than these earthly kings. And that is what was missing from Trump’s meeting with black pastors (and the same goes when he meets with white pastors).

It doesn’t matter that 94 percent of black women and 85 percent of black men voted for Hillary Clinton over Trump. We are constituents, and it is our right to be treated like every other citizen.

And now we know the meeting was a photo op and a colossal waste of time. On Thursday, prison reform hater, Attorney General Jeff Sessions, released a statement praising Trump for not backing the reform bill before the midterms.

Instead, we watched a group of black men so happy to just be sitting at the table that they forgot to represent the people they serve in their congregations.

Donald Trump should be meeting with black pastors. And members of the Black Press. And civil rights leaders. And black entrepreneurs. But if anyone of us is going to sit in a seat of power, we need to be willing to speak truth to power. This is not a moral dilemma. It is just and right.

These black pastors are catching a lot of flak at home for their obsequious behavior. Instead, they should have been obedient to the Word and been willing to tell Trump the truth. And if they won’t, then stay at home because all you’re doing is wasting our time.