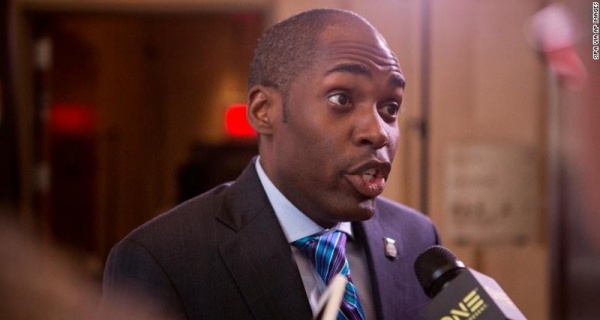 Dennard, a reliably pro-Trump contributor on CNN, was the subject of a Wednesday report by the Washington Post, which revealed he had been fired by Arizona State University four years ago for alleged sexual harassment. According to the report, Dennard was accused of “making sexually explicit comments and gestures toward women, according to documents and a university official.”

“We are aware of reports of accusations against Paris Dennard,” a CNN spokesperson said in a statement. “We are suspending Paris, effective immediately, while ‎we look into the allegations.”

According to a university report obtained by the Post, Dennard acted inappropriately with a recent graduate of ASU who worked for him at the time. He told her he wanted to have sex with her, “pretended to unzip his pants in her presence, tried to get her to sit on his lap, and made masturbatory gestures.”

At the time, Dennard was working as an events director for ASU’s McCain Institute for International Leadership. He had worked for George W. Bush’s White House in the past.

On Monday, Trump called him “wonderful” for his debate with Phillip Mudd, a former counterterrorism official with the CIA and the FBI. “Dennard destroyed him,” wrote Trump. Dennard was a surrogate for Trump during his campaign and is now a member of the President’s Commission on White House Fellowships.

In emails with the Post, Dennard said: “I cannot comment on items I have never seen regarding allegations I still believe to be false. This is sadly another politically motivated attempt to besmirch my character, and shame me into silence for my support of President Trump and the GOP.”

Donald J. Trump
?
@realDonaldTrump
Just watched former Intelligence Official Phillip Mudd become totally unglued and weird while debating wonderful @PARISDENNARD over Brennan’s Security Clearance. Dennard destroyed him but Mudd is in no mental condition to have such a Clearance. Should be REVOKED? @seanhannity