Neil Gorsuch Has Made History By Being The Most Illegitimate Supreme Court Justice, Ever 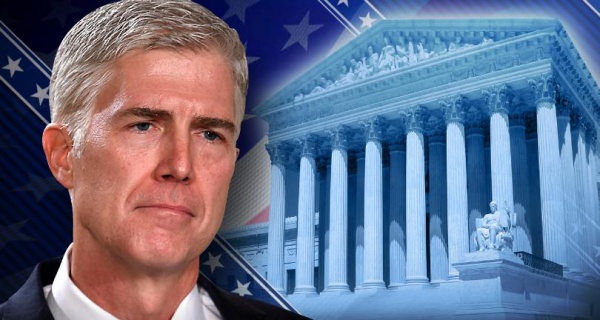 There’s never been a member of the Supreme Court like Neil Gorsuch.

Sure, there have been plenty of white men. There’s been no shortage of Harvard grads on the Supreme Court. And Gorsuch is only the latest in a long line of judges who believe that Charles Dickens’ novels describe a kind of capitalist utopia. But Gorsuch literally has less democratic legitimacy than anyone who has ever sat on the nation’s highest Court.

That’s the first in a series of bracing facts laid out by Trinity College political science professor Kevin McMahon in a new paper published in the Chicago-Kent Law Review. Last year, for the first time in American history, “the United States Senate confirmed a nominee for the High Court appointed by a President who had failed to win the popular vote with the support of a majority of senators who had garnered fewer votes—indeed far fewer votes— in their most recent elections than their colleagues in opposition.”

Gorsuch is unique, in that he is the only person ever confirmed to the Supreme Court by a minority coalition after being nominated by a popular vote loser, but he is not the first member of the Court confirmed by a bloc of senators who were elected by a minority of the voters. According to McMahon, “that distinction belongs to Clarence Thomas.”

Justice Samuel Alito, who was appointed by President George W. Bush in 2005, also was confirmed by a minority coalition in the Senate. By contrast, the Democratic justice who received the narrowest confirmation vote, Justice Elena Kagan, was supported by a bloc of senators who received nearly 70 percent of the popular vote.

If Supreme Court nominee Brett Kavanuagh is confirmed, moreover, it is likely that he will join Gorsuch as the second member of the Court in American history to be nominated by a minority president and confirmed by a coalition of senators who represent less than half of the nation. That means that four of the five judges who form the Court’s Republican majority will owe their jobs to the fact that our Constitution effectively gives white conservatives more representation than the the larger, more diverse Democratic coalition.

The new era of partisan judges

The title of McMahon’s paper is “Will the Supreme Court Still ‘Seldom Stray Very Far’?: Regime Politics in a Polarized America.” It’s a reference to a line of political science scholarship which suggests that the Court has “seldom strayed very far from the mainstreams of American life.” Yet, as McMahon lays out in his paper, the idea that the Supreme Court’s decisions typically align with the electorate’s views grew out of an era when justices rarely joined the Court if they faced significant political opposition.

Between 1837 and 1969, most justices were confirmed by overwhelming margins — less than 25 percent of senators opposed the nominee. Of the 26 nominations in this period where at least a quarter of the Senate opposed the nominee, only seven nominees were actually confirmed. This suggests that the Senate often screened out nominees who were likely to be outside the political mainstream of that era. When a nominee experienced more than token opposition in the Senate, the nominee was rarely confirmed.

That’s not to say that the Supreme Court was an especially democratic institution during this period. The United States did not become a liberal democracy until 1965, when the Voting Rights Act undercut Jim Crow voter suppression. The Seventeenth Amendment, which provides for direct election of senators, wasn’t ratified until 1913.

But, at the very least, McMahon’s data suggests that nominees that triggered real opposition within the “national governing alliances that historically dominated American politics” rarely got confirmed. And even when an outlier justice did slip through, that justice was unlikely to be joined by four similarly minded justices who would consistently place him in the majority.

This consensus-driven process has now broken down. “Since George W. Bush’s nomination of Harriett Miers in 2005,” McMahon writes, “every nominee has been contested in the Senate.” At least on the Republican side, nominees are now selected based on their loyalty to a deeply ideological agenda. And most of the Court’s Republican members were muscled through the Senate despite opposition from senators representing a majority of the nation.

It is unlikely, to say the least, that judges chosen in a polarized process that favors political might over consensus building will care very much about “the mainstreams of American life.” Many of them were placed on the Supreme Court for the very purpose of keeping the political mainstream from making policy.

Most importantly of all, the Court’s new Republican majority is likely to dismantle what remains of the Voting Rights Act. Without this firewall against Jim Crow-style voter suppression, Republican state lawmakers will move quickly to rig elections. In Georgia, for example, voting officials are trying to shut down seven of the nine voting precincts in a majority black county. Expect this tactic to proliferate if Kavanaugh joins the Supreme Court.

Republicans will owe their Supreme Court majority to the fact that they can now confirm a justice against the will of the American people, and prevent Democratic presidents from confirming justices even when the voters want to be governed by Democrats. And the Court’s new Republican majority will use its power to further entrench Republican rule.

McMahon’s findings also have profound implications for how Democrats should behave if they manage to regain power despite this rigged system. There are a bevy of tactics — stripping the Court’s power to hear certain cases, court-packing, open defiance of Supreme Court decisions — which Democrats could deploy against a rogue Supreme Court.

Historically, these tactics have widely been viewed as out-of-bounds, and for good reason. They are direct assaults on the idea that legal disputes must be resolved through legal process, and not through viciously partisan exercises of political power.

But what happens when the Supreme Court is, itself, the product of viciously partisan exercises of political power? Our entire judicial system rests on the assumption that judges are selected through a process that does not favor either political party any more than the voters themselves favor one party over the other. Take away that assumption, and the entire judicial branch loses its legitimacy.