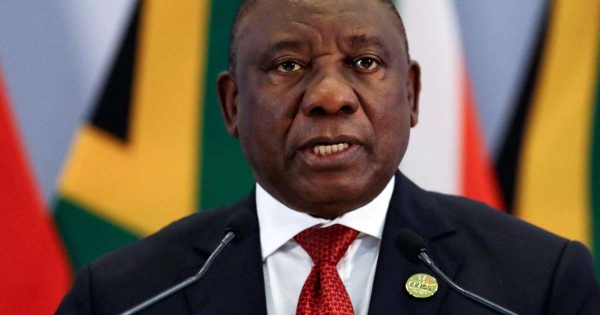 Donald Trump on Thursday tweeted a "disproven racial myth" about the killing of white farmers in South Africa to distract from his own problems at home, the former U.S. ambassador to the country charged.

Trump — making the claims after a segment on the issue on Fox News — said he had asked Secretary of State Mike Pompeo to study "land and farm seizures" and the "large-scale killing of farmers" in South Africa — prompting an angry response from Pretoria accusing the president of stoking racial divisions.

@realDonaldTrump
I have asked Secretary of State @SecPompeo to closely study the South Africa land and farm seizures and expropriations and the large scale killing of farmers. “South African Government is now seizing land from white farmers.” @TuckerCarlson @FoxNews

The South African government said Trump's tweet was based on "false information" and reflected a "narrow perception which only seeks to divide our nation and reminds us of our colonial past." The government said it would seek clarification of Trump's remarks from the U.S. Embassy.

The Trump administration has yet to appoint an ambassador to South Africa, but the previous holder of the post, Patrick Gaspard, accused the president of using the issue of land seizures to distract from his domestic political problems.

"The president of the U.S. needs political distractions to turn our gaze away from his criminal cabal, and so he's attacking South Africa with the disproven racial myth of 'large-scale killings of farmers,'" Gaspard tweeted. "This man has never visited the continent and has no discernible Africa policy."

So what prompted Trump's foray into South African land rights and what was he talking about?

WHAT IS LAND EXPROPRIATION?

South Africa is in the throes of a racially charged national debate over land reform, a lawful process that seeks to correct the legacy of decades of white minority rule that stripped blacks of their land.

The country faces deep racial divisions and inequality nearly a quarter of a century after Nelson Mandela swept to power after apartheid collapsed in 1994.

The ruling African National Congress, which has been in power since 1994, has pledged to close that gap, but progress has been slow.

It has followed a "willing seller, willing buyer" model under which the government buys white-owned farms for redistribution to blacks.

In an effort to speed up land reform, President Cyril Ramaphosa said in July that his government would amend the Constitution so the state could expropriate land without compensation.

He has said any measures would be conducted without affecting economic growth or food security, and no land has been seized since the reform plans were announced. The change will allow for the lawful correction of historic injustices, he believes.

However, the prospect has sent panic through some white farming communities that worry the policy will strip farmers of their property, send land values plummeting or make them the target of potentially violent land seizures such as those in neighboring Zimbabwe.

ARE WHITE FARMERS BEING KILLED?

For years, a small but vocal group of white South Africans have claimed white farmers are the target of violent, racially motivated farm attacks.

However, experts say that the attacks are in line with the country's high murder rate and that there is no evidence connecting them to victims' race. In 2016-17, there were 74 murders during farm attacks, according to Africa Check, compared to 19,000 murders across the country in the same period. AgriSA, an agricultural industry association, says farm murders are at a 20-year low.

And although the majority of farm murder victims are white, the proportion is lower than the rate of white farm ownership, as Africa Check noted in 2013. In fact, "whites are less likely to be murdered than any other race group," it said.

Nevertheless, the prospect of compulsory farm seizures is a popular taking point among alt-right commentators and white nationalist websites that describe it as anti-white racism and say farmers are victims of "white genocide."

"People are not being targeted because of their race, but because they are vulnerable and isolated on the farms," said Gareth Newham, head of the crime and justice program at the Institute for Security Studies in Pretoria.

Julius Malema, leader of the opposition Economic Freedom Fighters party and a longtime proponent of land expropriation, told reporters on Thursday: "There is no white genocide in South Africa. There is black genocide in the USA; black people are killed every day. There is a black genocide here in South Africa; just recently a farmer was convicted for the murder of a black farmer."

Trump's tweet followed a segment on Fox News on Wednesday night in which host Tucker Carlson claimed Ramaphosa had already started "seizing land from his own citizens without compensation because they are the wrong skin color," calling the alleged seizures "immoral."

However, the president's comments were applauded by AfriForum, an organization that mostly represents white South Africans who have described land expropriation as "catastrophic" and traveled to the United States this year to lobby the Senate and other officials.

Earlier this month, the group posted a list of farms it said were earmarked for expropriation, a list that the government said was fake.

"Everyone in South Africa should hope that the pressure from the USA will lead to the (ANC) reconsidering the disastrous route that they want to take South Africa on," AfriForum's CEO Kallie Kriel said Thursday.