America: What Is Going On? 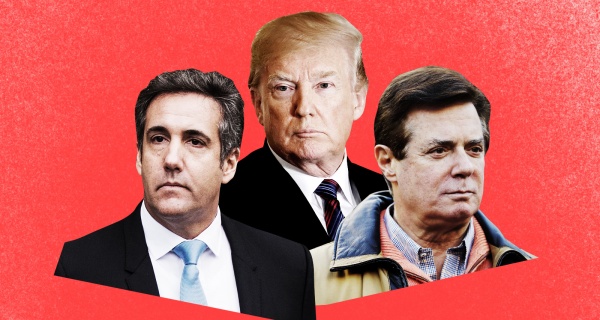 We can’t look to Donald Trump for guidance or wisdom in the wake of Tuesday’s twin blows to his presidency. We know that he’s going to go down fighting to the end, snarling back at his foes and anyone else who gets in his way. We know he’ll continue to deny the facts, the evidence and the truth, until someone takes away his power, and finally, his microphone. That day is not here yet, but it is measurably closer than it was a week ago. America knows that two more of the president’s men are crooks.

The people who really matter as Trump’s damnable presidency starts to implode are those who always have held in their hands the power to determine his fate: Congressional Republicans. Does the conviction on tax fraud and bank fraud charges of former Trump campaign chair Paul Manafort erode their support for this administration? How about the fact that Trump’s former lawyer and fixer, Michael Cohen, implicated the president during his plea colloquy in federal court? Will Republicans, at last, save themselves, and America, from this rogue White House?

We’ve reached the part of the story where Trump, if he were not the president, would surely be a federal criminal defendant charged with campaign finance violations and likely others. Let that sink in as the administration continues to pitch itself as the “law and order” White House. Trump’s legal troubles are only going to get worse now that he is linked, in court and under oath, to admitted criminal conduct. It doesn’t matter if Cohen isn’t formally “cooperating” with prosecutors (though I bet he is). Cohen’s already done enough public damage.

What will Senate Majority Leader Mitch McConnell do now that Cohen has essentially corroborated other evidence linking Trump to multiple hush-money payments? Is he prepared to campaign this fall on behalf of a party led by an unindicted co-conspirator who successfully (until now anyway) paid off a woman not to tell her story of an illicit affair? What about Speaker Paul Ryan? He is going to go back home to Wisconsin and do, what, exactly? Tell voters that they should re-elect Republican incumbents so they can return to Washington and continue to cover up Trump’s crimes and the administration’s rank corruption?

What about all those feckless Republicans running in gerrymandered House districts that suddenly are competitive for the first time in a long time? Are any of them going to have the courage to do something now that it’s even clearer that this is the most corrupt administration in the nation’s history? Is there a point at which Trump’s legal problems are so profound that his perceived political power among his fellow Republicans weakens? If that doesn’t happen now, then when?

What happened Tuesday wasn’t just another tick-tock day in the history of Special Counsel Robert Mueller’s Russia investigation. It wasn’t just another afternoon of shadowy leaks and unbridled craziness coming out of the mouth of Rudy Giuliani. It was a day when Donald Trump became arguably more culpable of felony crimes than Richard Nixon ever was during the course of the Watergate saga. Tuesday was the day that plausible deniability died for Republicans with a pulse and a conscience. And it didn’t come from Mueller, at least not directly. It was a Virginia jury that hammered Manafort. It was federal prosecutors from New York, not Washington, who brought Cohen in from the cold.

The early returns from members of Congress were not encouraging.

Sen. Lindsey Graham, the South Carolina Republican who once mocked Trump but is now a presidential bestie, wanted the world to know Tuesday evening that the big takeaway from the day was that Manafort’s conviction and Cohen’s plea were not directly related to evidence of Russian collusion. So, too, did Sen. John Cornyn of Texas. That reminds me of the line I heard from a young man I was representing when I was in law school in Boston: “I didn’t steal that car,” he told me from his jail cell. “Good,” I said, “That’s a good defense to this auto theft case.” “No man, you don’t understand. I don’t do that petty shit. I am a crack dealer. I don’t steal cars.” Not such a good defense.

If the Republican defense of Trump boils down to: “We’ll excuse all his other crimes so long as the president isn’t shown to have conspired with the Russians,” it’s a terrible strategy. It’s also unpatriotic. There is already ample evidence that the Trump team did collude with Russians during the campaign in order to manipulate the race against Hillary Clinton. Second, the Manafort trial revealed clear evidence of his links to the Russians, which Mueller surely is using. Third, the illegal hush-money payments we now know Trump authorized, or consented to, may be only part of the story of the man’s criminal enterprises. Imagine the GOP 2018 bumper sticker: The Party of Felons? Sure! But Not Traitors!

In a sane world, Congress would immediately hold bipartisan hearings to explore the contours of the president’s conduct. They would prioritize this push for accountability and transparency over the dubious nomination of Brett Kavanaugh to the Supreme Court, because in a functioning democracy, it would be more important to first determine whether the president is a crook before giving him the opportunity to make another lifetime appointment to the nation’s highest court. The nation would be riveted, Watergate-like, by public congressional hearings into Trump’s alleged crimes.

But that is not the way this is going to unfold. Not with this crowd. What is far more likely is that McConnell and company will continue to cower and abdicate their constitutional functions and that the president’s tribunes in the media will continue to delude themselves that this is a mirage or some sort of sinister plot (which now encompasses 12 jurors in Virginia). Kavanaugh will be confirmed by the Senate and then likely deliver a crucial vote protecting Trump from Mueller if there’s a fight over a subpoena or a deposition or even an indictment. It is far more likely that Trump will pardon Manafort as soon as he thinks he can get away with it. And he might try to pardon Cohen, too, if Cohen changes his mind and decides he’s willing to accept one.

Maybe it will take those final actions, that level of obstruction of justice, to rouse Republicans from their disastrous inaction. Maybe it will take an indictment of the president by some brave soul at the Justice Department or by Mueller, himself. Or maybe not. The continuing defense of Trump by Republicans in the House and Senate has become increasingly untethered from law or fact, and in that sense, it mirrors the delusions from which Trump suffers. It’s no way to run a legislature, much less a country, but here we are, in the dog days of August, led by a man who, if he weren’t sworn into high office would be fighting in court to remain free on bail.