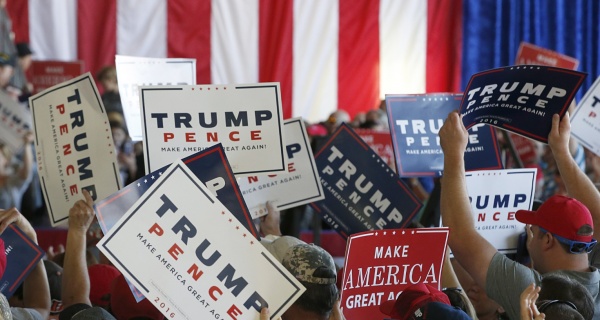 One of them is the “Make America Great Again” crowd, which is mainly disaffected working-class skilled and unskilled laborers whose jobs have been eliminated by mechanization and globalization over the past several decades. This group wants to see a return to the glory days of the 1950s and 1960s, when every (white) man who wanted a job could get one. They’re mostly older white men and women, while most of them are not actively racist, sexist, or homophobic, and resent being called any of these things, they’re tolerant of those who are. In general, this crowd strongly believes in “law and order”, and tolerates but does not encourage immigration. Their main concern is recovering the economic security that they’ve lost over the past several decades.

The second is the Religious Right. This group is committed to the imposition of their moral views on the country. They oppose abortion in virtually all circumstances; while some will make allowances for rape or incest, but most only make an allowance for the health or life of the mother, and some will not even do that. This group believes that traditional sex and gender roles ought to be explicitly favored in law and society and that individuals who will not conform to these expectations should expect to be disfavored in law and in practice. Thus, this group is opposed to legal or social recognition of same-sex marriages, would deny the right of same-sex couples to adopt (and in some cases to retain custody of children born naturally), and would deny the right of transgender individuals to be recognized as a member of their preferred genders. They are committed to reversing Roe and Obergefell, and on abolishing abortion and same-sex marriage nation-wide. Despite frequent claims, they are not the least bit interested in allowing either question to be decided on a state by state basis; their goal is to make their religiously-grounded beliefs national policy.

The third is a fairly weird collection of far-right-wingers who have an ardent belief in “small government”. When you hear people talking about the “deep state”, it’s these people who are talking. These people support Trump because Trump has promised to shrink the federal government, something which he has been fairly effective in doing, in part through policy, and in part because most people who might otherwise be inclined toward government service have no desire to work for this President, making it hard to hire people to work for the Trump Administration and thus creating lots of vacancies within the civil government of the United States.

The fourth group is the American Neo-Nazi movement and other ultranationalist white supremacy organizations, and individuals similarly motivated, in the United States which wish to “restore” America as a safe place for white Americans. This group is explicitly and virulently racist.

Trump’s ongoing support with these groups is, of course, different.

The first group, the disaffected blue-collar workers, will stay with Trump only so long as he appears to be likely to improve their personal situations. Trump has made promises to “bring back manufacturing jobs”, an outcome that has yet to materialize in any substantial way. If he does not actually bring these people their jobs back, many of them will defect in the next election to a different candidate, especially if that candidate offers them a credible promise to do something that they want. This group has generally tolerated most of Trump’s anti-immigrant and anti-minority platform, although the recent experience with separating children from parents did not sit well with many of them. It’s likely that Trump’s trade war, and the damage that it is likely to do to the US economy, will hurt him here more than anything else he’s done or will yet do. Unfortunately, this voting group is especially prone to manipulation through propaganda, and Trump and his campaigners are very adept at propaganda.

The second group, so-called “religious value voters”, have a lot of problems with a lot of Trump’s behaviors and policies, but has stuck with him for one reason and one reason only: he has promised and has when given the chance, appointed judges who are expected to rule in the manner this group would prefer. The child separation policy was especially problematic for this group, especially for the non-Evangelicals in this coalition. If Trump appoints a replacement for Justice Anthony Kennedy who is agreeable to this coalition, I suspect much of it will cease to support him: they’ll have gotten what they bargained for in voting for him, and will not be able to bring themselves to continue to support him for the balance of his decidedly un-Christlike attitudes.

The third group, the small-government people, see the Trump-induced government logjam as a positive feature of his presidency. They’ll continue to support him as long as he continues to make the federal government (which they detest) dysfunctional. Since Trump has absolutely no idea how to govern, their continuing support is pretty much assured. Fortunately, this group (except to the extent that it overlaps with the first or fourth groups) is fairly small.

The fourth group, the white supremacists, are Trump’s natural support base. They will never abandon him.

Trump needs pretty much all of these four groups to back him in order to remain in power. But once he appoints Brett Kavanaugh to take Kennedy’s seat, his usefulness to the Religious Right will be seriously diminished, and there will be significant calls for someone more acceptable to them to challenge him in the 2020 primary. And the disaffected blue-collar workers whose lots have not materially improved in the past four years are going to be looking for a different hero, especially after Trump’s trade wars rip away what little gains they’ve made in the past year. So I think he’s going to be in a for a tough reelect in 2020—provided that someone better comes along.