As The World Watches, Reality TV Is Playing Live At The White House 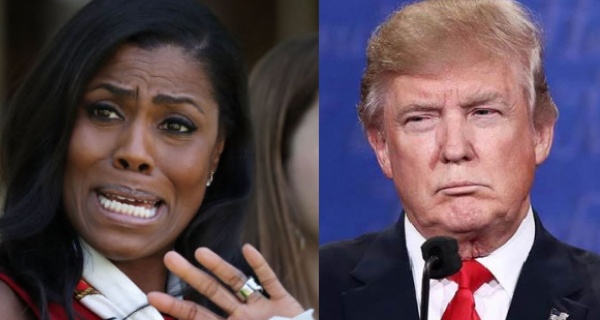 Omarosa Manigault-Newman’s promotional tour for her new tell-all book continued Monday morning when the former Apprentice-contestant-turned-White-House-employees went on the Today show. According to Omarosa, a day after Chief of Staff John Kelly called her into the Situation Room to fire her, she received a call from President Trump, who alleges he was unaware that she had been let go. Omarosa recorded the call, and on Monday provided NBC with audio excerpts of the conversation.

@TODAYshow
#Breaking: @OMAROSA provides @NBCNews with this exclusive excerpt of a recording of a phone call that she says she received from President Trump the day after White House Chief of Staff John Kelly fired her.

“Omarosa, what’s going on? I just saw on the news that you’re thinking about leaving. What happened?” the president says. After Omarosa tells him that Kelly told her she was no longer needed in the White House, Trump denies knowing about it. “No… I… Nobody even told me about it. You know they run a big operation, but I didn’t know it. I didn’t know that. Goddammit. I don’t love you leaving at all.”

It was a pretty unconvincing performance from one of America’s most seasoned liars. The release of the tape Monday morning prompted the president to unload on Omarosa over Twitter.

@realDonaldTrump
Wacky Omarosa, who got fired 3 times on the Apprentice, now got fired for the last time. She never made it, never will. She begged me for a job, tears in her eyes, I said Ok. People in the White House hated her. She was vicious, but not smart. I would rarely see her but heard....

@realDonaldTrump
...really bad things. Nasty to people & would constantly miss meetings & work. When Gen. Kelly came on board he told me she was a loser & nothing but problems. I told him to try working it out, if possible, because she only said GREAT things about me - until she got fired!

@realDonaldTrump
While I know it’s “not presidential” to take on a lowlife like Omarosa, and while I would rather not be doing so, this is a modern day form of communication and I know the Fake News Media will be working overtime to make even Wacky Omarosa look legitimate as possible. Sorry!

Not only do the tweets contain yet another instance of the president insulting the intelligence of an African American, they make clear that he essentially views the presidency as another season of The Apprentice.

The Today show appearance comes a day after Omarosa went on Meet the Press to release another recording she made while being fired by Kelly in the Situation Room, a venue typically reserved for highly sensitive policy or national security discussions.

Omarosa was roundly dragged for having the gall to bring a recording device into the Situation Room, but it’s worth pointing out that the president himself has routinely flouted just about every standard of decorum and protocol imaginable, most of which — like, say, allowing Mar-a-Lago members to run the VA, or even just letting them tour Air Force One — are far graver.

In addition to the recordings, Omarosa has made a series of damning allegations against her former boss. “[The White House] continues to deceive this nation by how mentally declined [the president] is, about how difficult it is for him to process complex information, how he is not engaged in some of the most important decisions that impacts our country,” she said Sunday on Meet the Press. On Monday, Omarosa claimed that Kelly “is running this White House,” and that Trump “has no clue” what’s going on. “He’s being puppeted,” she said, “and that’s very dangerous for this nation.”

Though she has previously defended the president against claims that he is racist, she hasn’t hesitated to describe him as such while promoting her book. Omarosa said on Meet the Press that she personally heard a recording of Trump saying the n-word during a taping of The Apprentice. The existence of the tape has long been rumored by several figures associated with the show. Tom Arnold, who tweeted about the tape prior to the 2016 election, recently laid out what he knows about the recording to Rolling Stone‘s Brian Hiatt:

“When I push Arnold for the full context of the alleged Apprentice slur, he claims that Trump was asked on the set about heading to Sammy’s Roumanian Steakhouse for dinner and that Trump responded, ‘I don’t want to go uptown with all those n——.’ (White House representatives did not respond to multiple requests for comment.) It came out casually, Arnold claims, ‘like he’s said it a billion times before.'”

(Arnold later clarified that the restaurant was Rao’s, in Harlem, not Sammy’s.)

The administration’s response to Omarosa’s scorched-earth media tour has mirrored its response to pretty much anyone who has made allegations against the president. “The very idea a staff member would sneak a recording device into the White House Situation Room, shows a blatant disregard for our national security — and then to brag about it on national television further proves the lack of character an integrity of this disgruntled, former White House employee,” Press Secretary Sarah Huckabee Sanders said in a statement.

When asked on Saturday about the allegations made by Omarosa, Trump called her a lowlife.

This is all Trump’s fault, of course, who appears to have hired Omarosa because she flattered him. He admitted as much Monday morning when he tweeted that despite her being a “loser” and “nothing but problems” he fought to keep her on board because “she only said GREAT things” about him. The concept of public service has never seemed to be of much concern to the man who views the presidency as nothing more than a reality show with an unlimited budget.