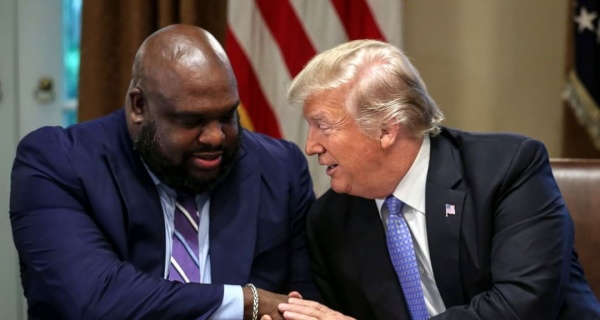 Most urbanites thought it was bad enough when Cleveland-based pastor Darrell Scott befouled the airwaves by saying on live TV that Donald Trump is the most pro-Black president of the modern era. It was painful enough to the ear cavity to listen as Scott heaped effusive praise on Trump while simultaneously stomping on his predecessor, former President Barack Obama.

Pastor Keith McQueen, the founder of Powerhouse Church in Indianapolis, was initially responding to another pastor defending Gray, claiming that people hated the megachurch owner.

McQueen clarified that folks do not hate Gray but hate what he did.

“We don’t hate @realjohngray We love him,” McQueen wrote on his Instagram page. “However we can’t respect his decision to condone the behavior of an egotistical, misogynistic, narcissistic clown that has turned our country into a circus with his quarrelsome and divisive rants. He has affirmed the behavior of this man by sitting at the table to ‘discuss’ prison reform and urban revitalization with a man that has never cared for urban populations and incites hatred towards minorities that are targeted and often locked up unjustly.”

He continued: “We disagree with him on the behalf of young black men, women, Mexican #immigrants and their children #lgbt people and citizens that prefer a government that isn’t illegally influenced by Russian leaders.”

“Sitting at a table is neither affirming, endorsing, agreeing or aligning. If so, Jesus certainly couldn’t have sat with Zaccheus or been in the company of lepers. High Priests couldn’t go near lepers,” he commented under the post. “Jesus made clear that He came eating and drinking and was a friend to sinners, tax collectors, and wine bibbers. Was he aligning or affirming their behavior? Of course not. And an initial conversation doesn’t portend for what could be produced in the future. I could never presume to know your calling or assignment since we don’t know each other.”

Gray was just getting warmed up on IG. He continues:

“But scripture does outline for us what believers should do if they have a disagreement. It starts with a one on one. Then get two or three witnesses and then take it before the church. None of that happened before you posted about a fellow believer who had everything to lose and nothing to gain by being obedient to the God who sent me. That I didn’t voice the accumulated pain of 400 years of REAL BROKENNESS in our black and brown communities is something I wish I could do. Some moments call for a level of wisdom that my emotions would rather do away with. ‘Come, let us reason together’….perhaps next time try to reach out to me first and dialogue before utilizing your platform to hit your brother in Christ. I don’t mind people who don’t believe what I believe saying whatever they want. What I wasn’t prepared for was friendly fire.”

McQueen answered his colleague with another sharp rebuke, reminding Gray that Jesus sat with the dispossessed and disenfranchised, not with the powerful people who orchestrated mass misery and impoverishment.

“@realjohngray the difference between Jesus and you sitting with @realdonaldtrump is that Jesus sat with the oppressed and not the oppressor. Jesus confronted the political figures of his day. The process of addressing disagreements between leaders is a process between believers and not preachers to politicians. The book of Jude speaks of those that are divisive and full of dissent and says HAVE NOTHING TO DO WITH THEM.”