In A Small Pennsylvania Town, Neo-Nazis Are Becoming More Confident 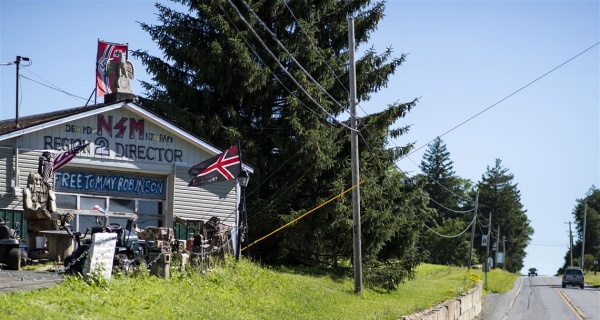 The traffic sign that greets visitors on the south side of Ulysses, a tiny town in rural far north-central Pennsylvania, is suitably quaint — a silhouette of a horse-drawn cart reminding drivers that the Amish use the roads, too.

But on the north side of town, along the main thoroughfare, is a far different display: a home dedicated to Adolf Hitler, where star-spangled banners and Nazi flags flutter side by side and swastikas stand on poles.

White supremacy has had a continuous presence in Ulysses and Potter County since the Ku Klux Klan arrived a century ago, giving the town — with a population of about 650 — national significance. In the mid-2000s, it hosted the World Aryan Congress, a gathering of neo-Nazis, skinheads and Klan members.

This year, federal prosecutors charged six members of an Aryan Strike Force cell with weapons and drug offenses, contending they had plotted a suicide attack at an anti-racist protest. A terminally ill member was willing to hide a bomb in his oxygen tank and blow himself up, prosecutors said. The group had conducted weapons training in Ulysses.

Neo-Nazis and their opponents here say white extremists have grown more confident — and confrontational — since the rise of Donald Trump. Two months before the 2016 presidential election, the KKK established a “24 hour Klan Line” and sent goody bags containing lollipops and fliers to homes. “You can sleep tonight knowing the Klan is awake,” the message read. A regional newspaper ran Klan advertisements saying, “God bless the KKK.”

Local police said the group had not openly recruited in years.

Two weeks later, the area’s two neo-Nazi groups, the National Socialist Movement and Aryan Strike Force, held a “white unity meeting” in Ulysses to discuss their response to Mr. Trump. One organizer would not say when the groups had last met.

Potter County has voted Democratic once since 1888; Mr. Trump received 80 percent of the vote.

“I can tell you with certainty that since November 2016, activity has doubled, whether it’s feet on the street or money orders or people helping out,” said Daniel Burnside, 43, a woodcarver who owns the Nazi-themed home and directs the state chapter of the National Socialist Movement, a far-right group that was founded in the mid-1970s. It has a presence in many states, according to the Southern Poverty Law Center, which tracks extremist groups.

Mr. Burnside, who wouldn’t say how many residents were involved in his group, was born in Ulysses and raised by a grandfather who he said was a Nazi sympathizer who fought in the U.S. Army in Europe during World War II.

Mr. Burnside said he joined NSM four years ago but has long harbored anti-Semitic views. Mr. Burnside does not see Mr. Trump as a leader of the NSM cause but as a politician who amplified long-standing white-nationalist views at the right time.

“Personally, I don’t know about Trump,” he said. “We’re anti-Semitic. Something’s off about Trump with the Jews. That said, we’re strategically aligned. When Trump says something that aligns with us — close the borders, build the wall, look after your own — that’s good: We’ve been saying this for 25 years, but he has made it mainstream.”

“We’re still a white nation, and I respect that he supports that,” Mr. Burnside added. “He’s also highlighted social problems. The kids who go to bed hungry, people who can’t pay their bills, the damage being done to society.”

Joe Leschner, 38, a white restaurant manager, fled the county this year because of what he said was abuse aimed at him and his wife, Sashena, who is black.

After he discovered a KKK leaflet outside their home, Mr. Leschner organized an anti-racism gathering in Ulysses. “And these guys drove by us and gave the gun signal, like they’re gonna shoot us,” he said.

One of those who Mr. Leschner said made a pistol gesture had been jailed for 10 years for an aggravated assault on a black man.

Photographs of the Leschners were circulated on VK, a Russian-run social media site, with users posting death threats, he said.

“We had to leave,” said Mr. Leschner. “Most people aren’t racist, but there are enough that are and enough who let it happen.”

Kathleen Blee, a University of Pittsburgh professor and expert on white extremism, said Ulysses became a nexus of such thinking as like-minded residents found each other.

“Modern white extremism is different to the KKK in the 1920s or Nazi Germany in that it is exclusively produced through small networks. It is not a mass movement,” she said. “It’s just one person recruiting another. Somebody knowing somebody. . . . You get an extremist in an area, they attract other extremists.”