While Immigrant Children Are Being Separated From Their Parents, Melania's Parents Sail Through Immigration Process 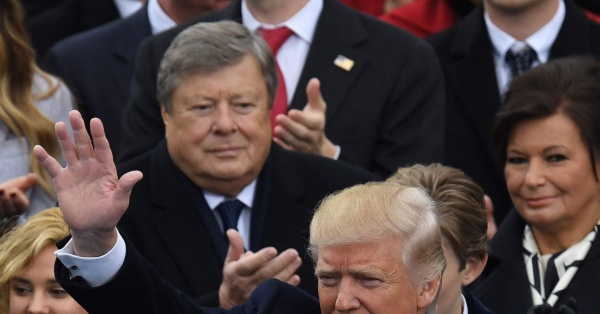 Melania Trump's parents were sworn in as U.S. citizens in New York City on Thursday and obtained their citizenship through the 'chain migration' process that President Donald Trump wants to end.

'They had gotten sponsored by their daughter and then once they had the green card, they then applied for citizenship when they were eligible,' their attorney Michael Wildes told The New York Times.

Migrants who are U.S. citizens or permanent residents are able to sponsor other relatives - such as parents, adult married children and siblings - to come to the United States in what is sometimes referred to as 'chain migration.'

Asked if Viktor and Amalija Knavs had obtained citizenship through that method, Wildes said: 'I suppose. It's a dirty — a dirtier word.'

He added: 'It stands for a bedrock of our immigration process when it comes to family reunification.'

There is a five-year requirement for green card holders before they can become citizens. The Knavs' attorney set they met that but no other details were available on how they went through the process.

Trump has proposed ending that options for immigration in which American citizens and legal permanent residents are able to sponsor family members to come to the United States permanently as part of his four-part immigration reform plan.

He has called it a path for terrorists to get into the country.

'CHAIN MIGRATION cannot be allowed to be part of any legislation on Immigration!,' the president wrote on Twitter on Sept. 15, 2017.

Viktor and Amalija Knavs arrived at a Manhattan federal building Thursday afternoon escorted by security. He wore a dark suit and blue tie. She wore a light pink pants suit and a white shirt.

Wildes said they were sworn-in during a private ceremony for security reasons.

The two, as is custom, held their hands over their hearts and recited the Pledge of Allegiance.

They got no special treatment during the citizenship process, Wildes said.

'The application, the process, the interview was no different from anyone else's other than the security arrangements,' Wildes said on Thursday.

'They would appreciate their privacy and we just thank everybody for their attention for this very important dialogue we're having on immigration. This is an example of it going right,' he said.

The Knavs have a residence in Maryland, near Barron Trump's school, to help their daughter and grandson.

They also travel with the first family, having been seen on trips to Camp David and Mar-a-Lago.

The first lady, born Melanija Knavs in the then Yugoslavia, changed her name to Melania Knauss when she started modeling.

Questions about how and when they came to the United States have increased with President Trump's fiery rhetoric on immigration.

But the first lady's office has declined to comment on the Knavs.

There are a few methods for immigrants to obtain green cards. The biggest portion of them are distributed through family connections. Others are distributed based on employment - the Knavs are retired - or through a special category such as refugee status.