Jordan Gives Muted Defense Of LeBron In Response To Trump 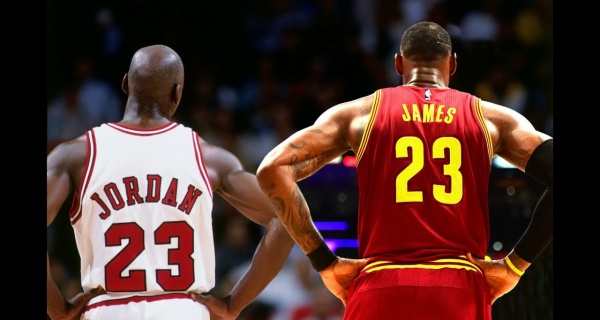 Date Posted: Monday, August 6th, 2018
As dozens of pro athletes rushed to the defense of LeBron James in his latest tweefing with the president, one voice that should have been the most amplified seemed to, once again, manage to mute itself with its brevity and apparent hollowness each weighing equally as heavy as the other.
In case you missed it, “The [current] King” of the basketball universe shared his honest opinion of Donald Trump’s clear attempt to divide and conquer professional sports, its athletes and their human right to express their opposition to social justice issues – namely, how police have managed to continue their centuries-long slaughter of Black and brown people in America without repercussion. Trump, of course, being the single most juvenile septuagenarian of all time, suffered a severe case of a bruised ego and reached for his first, middle and last resorts to go into attack mode when he experiences any type of emotion: his beloved Twitter account.
Lebron James was just interviewed by the dumbest man on television, Don Lemon. He made Lebron look smart, which isn’t easy to do. I like Mike!
— Donald J. Trump (@realDonaldTrump) August 4, 2018
What some found to be a typically racist retort from the president elicited a strong response across the wide-reaching spectrum of pro sports to defend their colleague.
They were in no uncertain terms.
“He’s gotta go!” NBA veteran Jarred Dudley tweeted about Trump.
A sign of an insecure human being is one who attacks others to make themselves feel better…I'm just sad that young kids have to see stupid tweets like these and grow up thinking it’s okay… forget everything else Donald your setting a bad example for kids our future.
— Donovan Mitchell (@spidadmitchell) August 4, 2018
“Tired of you!” Washington Wizards All-Star Bradley Beal tweeted.
And then came a statement from none other than Michael Jordan:
“I support LJ. He’s doing an amazing job for his community.”
Hmmmmm. The briefest of statements from the hoops legend begged so many questions.
Chief among them, at least instantly for a basketball zealot not unlike this writer, was to wonder aloud, who exactly calls LeBron “LJ”?
For at least the past 15 years, LeBron has gone by many nicknames – “LBJ;” “The King;” “King James;” “The Akron Hammer;” “The L-Train.”
But “LJ” is a head-scratcher. To diehard basketball fans, there’s only one LJ, and he used to be called Grandmama and once hit a miraculous (phantom?) 4-point play as a member of the New York Knicks. No, be clear, absolutely no one refers to LeBron as “LJ.”
But I digress. Sort of.
This is STILL Michael Jordan saying NOTHING. Acknowledging that LeBron is “doing amazing work,” is NOT condemning Trump and his politics. Jordan’s statement in many ways says that he STILL doesn’t want to upset Republicans, because they “buy sneakers too.”
— LEFT (@LeftSentThis) August 4, 2018
Secondly, Jordan said “his community” – a tricky choice of pronouns that could very well be a nod to the yeoman’s work Bron does in his Ohio hometown, like the impressive new school that promises to pay for students’ college education if they graduate on time; work that must be recognized and hailed as a golden standard for what big-time pro athletes should be obligated do for their own respective hometowns.
Curiously (or maybe not so curious?), Jordan took deliberate steps to avoid saying “OUR” community, which, of course, would be an implicit, inclusive admission of the Black pride that some critics say has long been missing from Jordan’s public discourse.
Even the president’s own wife, first lady Melania Trump, recognized LeBron ’s, said through a spokesperson that the best basketball player on the planet was doing “good things on behalf of our next generation.”
It looks like LeBron James is working to do go
Thirdly, somehow Jordan managed to avoid mentioning the orange elephant in the room: Trump himself! All the other athletes took deliberate steps to call out the president. A forceful condemnation of Trump would have been welcomed by many, but it was the guaranteed negative response from MAGA hat-wearing Jordan fans that “His Airness” likely feared the most when issuing his carefully and sparsely worded “statement.” After all, we are talking about the same man who once famously said, “Republicans buy sneakers too.” (Public records show Jordan donated to the Democratic Party and its candidates in 2012.)
Make no mistake – Michael Jordan is the most celebrated basketball player of all time, but his status of being the best and greatest player ever is slowly and methodically being encroached on by LeBron. Jordan’s legacy on the court is unquestionable, but off of it is another story. No. 6 is winning personally, professionally and socially – and that’s one three-peat Jordan could never lay claim to.