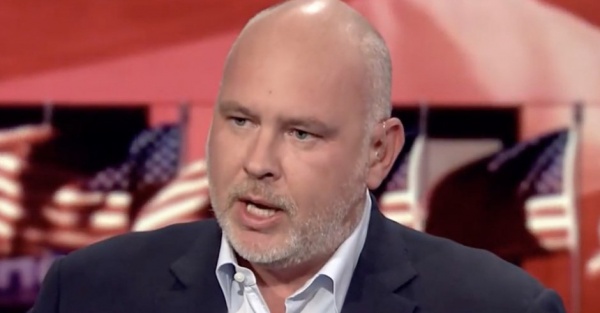 Ever since Steve Schmidt’s high-profile defection from the G.O.P. and his embrace of the Democratic Party in June, the chattering classes have been conjecturing about the next career move for the veteran political operative, P.R. pro, cable-news talking head, and erstwhile campaign mastermind to Arnold Schwarzenegger and John McCain. (Howard Schultz 2020?) The answer, naturally: a podcast based on Schmidt’s zealous opposition to Donald Trump.

On Monday, Schmidt will debut Words Matter, a 45-minute weekly audio production—co-hosted with fellow non-practicing Republican, White House veteran, and political analyst Elise Jordan—that will tap into the Trump era’s primal defiance from a center-right perspective. “You have too many people involved in politics who are scared shitless of saying what they actually believe, and I’m not one of them,” Schmidt told me this week. “I have a point of view that this is an extraordinary moment in America’s history. The hour that our founders long feared has arrived—that we’d have a lawless president disconnected from American ideals and values, and that Congress would never exercise its co-equal sovereignty to put a check on the lawlessness. Liberal democracy is in regression all over the world, and it’s a dangerous thing.”

Since the election, Schmidt and Jordan have emerged as two of the most prominent conservative voices spreading the anti-Trump gospel on television—specifically NBC and MSNBC, where they are both contributors. They feel like they have a lot more to say than can be condensed into cable-news blocks, and they believe a large number of people will want to listen. “There’s an opening for center-right content geared toward an engaged audience who wants more than a two-minute soundbite,” said Jordan in a separate interview. “We come to this from a somewhat similar ideological background. I’m more libertarian and he’s probably more of an establishment hawk, so it will make for an interesting debate between two segments of conservatism, given that it’s being taken over more and more by Trumpism than any ideology. There will be consequences for running this government like a personal kleptocracy. People need to be preparing for what follows and how we’re going to come out of this dark cycle of corruption.” (Jordan is married to Vanity Fair’s digital director, Mike Hogan, who wasn’t involved in this article.)

If the idea for an audio-driven, anti-Trump media platform sounds familiar, it should. That’s the gist of Pod Save America, the wildly popular progressive podcast created by former Obama strategists Jon Favreau, Jon Lovett, and Tommy Vietor in 2017. In just a year and a half, Pod Save has grown into a political podcast factory and lucrative events business all under the banner of Crooked Media, with 10 shows, eight-figure revenues, and a captive audience of millions. Words Matter Media is hoping to replicate that mojo, with one distinct tweak—if Crooked Media’s target demographic is the Resistance, Words Matter Media’s is the Never Trump crowd. (There’s plenty of room for crossover between the two, of course. Per Schmidt: “I’m not sure we’re looking for a faction. If you are a person who opposes Trump, we’re likely to be your cup of tea.”) Adam Levine, another veteran politico and former comms chief for the private-equity titan TPG, is also involved. He told me that the plan is to eventually develop other podcasts, as well as video content and events. Levine said that the company has already locked down two advertisers ahead of Monday’s launch, including ZipRecruiter, the MailChimp of its current milieu.

News and current-events podcasts are enjoying a bit of a boom right now, largely thanks to breakouts like Pod Save and The Daily, which has become a massive, money-making franchise for The New York Times. At the same time, the space is becoming crowded, and it generally requires heavyweight production chops to create a hit, so not all new entrants are able to take flight. But given Schmidt and Jordan’s stature, they’ve got a good chance. They’re working with Hangar Studios, a New York-based audio production company with a few dozen podcasts under its belt.

What specific topics might be in store for Words Matter listeners as Schmidt and Jordan dissect the issues of the day with an array of guests? “Domestic policy, national security policy, the state of our institutions, the health of democracy globally, the future of the conservative movement and the Republican Party,” said Schmidt. “One of the things I’m keen on doing is really revealing the degree to which the conservative movement, and by extension the Republican Party, has become a racket.” What about Schmidt’s future political ambitions? Might there be another campaign on the horizon? “Never say never.”