WATCH: Hostilities At Trump Rallies Are At A Boiling Point 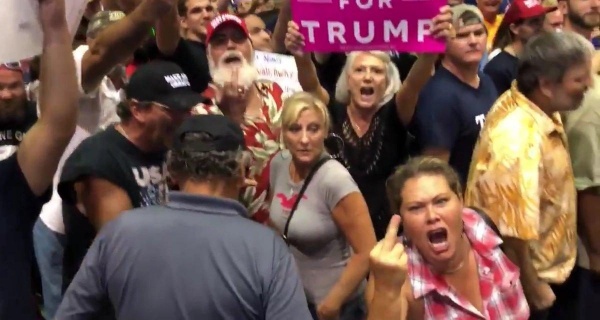 Donald Trump was in Tampa, Florida, Tuesday night to support Rep. Ron DeSantis’ campaign for governor. As is the case with all of the president’s endorsement rallies, the appearance was less about the candidate and more about Trump’s accomplishments, those crime-loving Democrats and, of course, the dishonest media. After his speech concluded, his supporters dutifully harangued CNN’s Jim Acosta, whom Trump famously rebuffed as “fake news” during a press conference in London last month.

Among the standard “Women For Trump,” “Blacks For Trump” and “Promises Made, Promises Kept” signs, the video shows a few others. They featured the letter “Q,” a reference to QAnon, a conspiracy theory gaining traction among some of Trump’s most ardent supporters. In a nutshell, followers of QAnon fashion themselves as detectives, or “bakers,” who try to make sense out of vague bits of information, or “bread crumbs,” left for them on the Internet by “Q,” a mysterious figure purporting to be a government official with high-level clearance. The clues left by “Q” have led his disciples to believe that Special Counsel Mueller’s investigation is a cover, and Mueller is actually working in tandem with Trump to take down a murderous cabal of liberal elites that includes everyone from Tom Hanks to Barack Obama. QAnon believes these elites have been running an elaborate child sex ring for years, and that there is a “storm” coming in which Trump will throw all of these pedophiles in jail once and for all. As NBC News reporter Ben Collins described it on Tuesday, QAnon is like “Pizzagate on bath salts.”

It wasn’t long ago that QAnon seemed too blatantly insane to exist anywhere but on the extreme fringes of the Republican party. In the past few months, however, it has steadily been seeping into the mainstream. When Trump traveled to North Dakota in June, kids were photographed in homemade “Q” shirts.

Tuesday night’s rally in Tampa seemed different. “Q” shirts and signs were prevalent in a way that was hard to dismiss. Margaret Sullivan of the Washington Post described the event a conspiracy theory’s “coming out party.” It wasn’t just a few people; practically every camera shot of the event featured a least a few “Q”s.

Though it may be hard to believe that such an obviously flawed conspiracy theory could attract so many followers, in retrospect, it isn’t hard to understand how it happened. Trump has been driving a wedge between Americans and reality for at least three years now — longer if you count his campaign alleging Barack Obama wasn’t born in the United States. He has repeatedly described the media as the “enemy of the people,” and last week told a group of veterans in Kansas City that “what you’re seeing and what you’re reading is not what’s happening.” The president’s tenure in office has depended almost entirely on pushing “alternative facts,” the phrase Kellyanne Conway used just two days after Trump took office to categorize the White House’s false representation of the crowd size at his inauguration.

Not only has this disassociation from reality allowed pernicious conspiracy theorists like Alex Jones to paint themselves as credible, more and more elected representatives are beginning to take advantage of the waning importance of facts. Regardless of whether Twitter is actually censoring right-wing voices (it’s not), politicians like Reps. Devin Nunes and Matt Gaetz have weaponized the story. Reps. Jim Jordan and Mark Meadows are calling for the impeachment of Deputy Attorney General Rod Rosenstein by citing unfounded, disproven theories. FBI agent Peter Strzok was recently called before Congress to testify about the origins of an investigation that has long been proven legitimate. On Saturday, Sen. Ted Cruz tweeted a defense of Jones’ InfoWars, which has ruined lives by insisting the Sandy Hook massacre that left 20 elementary school student dead never happened, among other harmful bad-faith.

If Trump and his lackeys in Congress have discounted reality, you can believe his base has, and QAnon is what it looks like when this categorical rejection of fact spins totally out of control.

“The people of this country are screaming at you for a reason,” Hannity said, pretending to address Acosta. “They don’t like your unfair, abusively biased treatment of the president of the United States. If you want to earn the respect of all Americans — not the coastal elites in California, L.A., San Francisco, D.C. and New York — maybe try reporting the entire story. Maybe try getting rid of the bias.”

Speaking of coastal elites, Trump — a billionaire who prior to becoming president lived in a lavish Manhattan penthouse and owned a plane with gold-plated bathroom fixtures — last night revealed a belief that a photo ID is necessary to buy groceries.

In 1992, George H.W. Bush was panned on the front page of the New York Times for being unfamiliar with grocery store scanner technology. Few elected officials have been as out of touch with the common man as Trump, and yet it doesn’t matter. To the president’s supporters, reality pales next to Trump’s conviction when he says he empathizes with the plight of the working class. The fact that his administration is currently attempting to pass a $100 billion tax cut for the super-rich without the approval of Congress is irrelevant.

Trump is propagating these lies for no other reason than to protect himself and his administration, but the real-life effects of his war against reality — QAnon being the most extreme example — are now part of the fabric of the United States, and will persist long after Trump is out of office.

On Wednesday morning, Trump even retweeted a video of his supporters abusing Acosta. The tweet was from his son Eric, who added to it the hashtag #Truth.