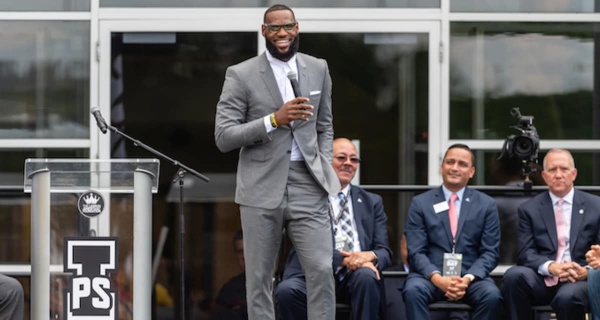 Amid news of his “I Promise” school opening, LeBron James sat down with CNN’s Don Lemon to talk about his new school, race relations in America and Donald Trump. James also addressed changes in his advocacy in recent years.

“It started with the Trayvon Martin situation,” James said regarding his growing social consciousness in the past few years. “Having boys of my own it hit home for me to see the story and to think that if my boy left home and he never returned… That kind of hit a switch.”

The three-time NBA MVP also spoke about potential political aspirations he might have in the future jokingly saying if no one else could run against Trump he might take it into consideration. “Well in that case I may,” King James told Don Lemon.

Trayvon Martin, Donald Trump, Charlottesville and having racial expletives spray-painted on the side of his Los Angeles home have all played a role in inspiring LeBron to want to give back to minority and low-income communities which ultimately prompted the creation of “I Promise.”

“For kids, in general, all they want to know is that someone cares. And when they walk through that I door I hope they know that this someone cares,” James told CNN.

James’ new school is different in that school hours will be from 8 a.m. to 5 p.m. in an effort to keep students off the streets and in school.”We want them here,” the Akron native said about the school hours. “The kids talked to me either verbally or I could just hear their mental. I am one of them… “It’s not that I’m nervous, I’m more excited about it… I’m truly humbled and blessed.”

LeBron’s new school offers GED opportunities for adults, guarantees tuition for graduates, has a food pantry and every student enrolled gets a free bicycle.

James has been openly critical of President Trump referring to the 45th president as a “bum” and among other things, criticized his response to the Charlottesville White Supremacist rally.

Like LeBron, Kim Kardashian was openly critical of the president only to later meet with him a successful effort to pardon Alice Johnson who was serving a life sentence for her involvement in cocaine trafficking. Lemon asked the new Los Angeles Laker if he would ever sit down with Trump to talk policy.