Censorship Claim From Diamond And Silk Is Fake News 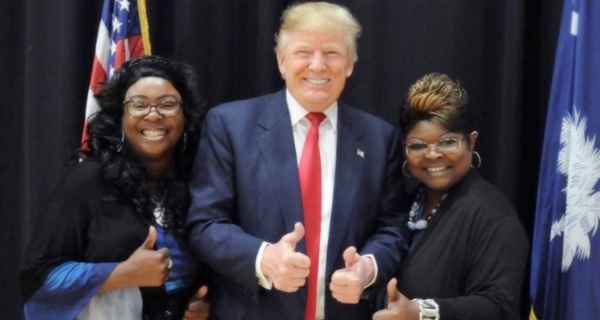 Date Posted: Monday, July 30th, 2018
Facebook CEO Mark Zuckerberg came to Washington and testified, for the first time, in front of two Congressional committees. It provided a unique opportunity for senators and House members to ask the person controlling the world’s largest social network about critical issues involving foreign interference in democratic functions, data privacy, and transparency.
Instead, many of the Republicans focused on Diamond and Silk.
Diamond and Silk are the stage names of two African-American women, Lynette Hardaway and Rochelle Richardson, who support Trump. They appeared at Trump rallies, are frequent guest on Fox News, and have a large presence on social media, including Facebook.
Beginning in September, Diamond and Silk began claiming that there was “bias censorship and discrimination against [the] D&S brand page.”
Their claim was that their page was being discriminated against because of their political views and, as a result, they were reaching fewer people.
ThinkProgress has examined Facebook data about their page and its performance, and the numbers clearly show this claim is totally without merit.
Still, Republicans in Congress latched onto their claim of censorship and focused a significant amount of time questioning Zuckerberg about it.
Senator Ted Cruz (R-TX), claimed that Facebook had “blocked Trump supporters Diamond and Silk’s page, with 1.2 million Facebook followers.”
Cruz told Zuckerberg that Diamond and Silk’s experience was proof that Facebook had engaged “in a pervasive pattern of bias and political censorship.”
“Why is Facebook censoring conservative bloggers such as Diamond and Silk?” Congressman Joe Barton (R-TX) asked the next day. “Diamond and Silk is not terrorism,” Marsha Blackburn (R-TN), scolded.
Some of the controversy stemmed from a communication that Diamond and Silk received from Facebook that described their content as “unsafe.” Facebook said the message was sent in error and did not reflect their policies.
But what about the underlying claim that Diamond and Silk are being censored by Facebook because of their political views? It’s not even remotely true.
Data from Crowdtangle, a social media analytics platform owned by Facebook, show that total interactions on Diamond and Silk’s Facebook page were steady. The “total interactions” metric covers the total number of reactions, comments, and shares of content posted to the page. Diamond and Silk’s Facebook page actually received more total interactions in March 2018 (1,088,000), when they were supposedly being censored, than in March 2017 (1,060,000). Diamond and Silk received more interactions in January 2018 (1,328,000), when they began complaining about censorship, than in any month the previous year.
Things get even more stark when you compare Diamond and Silk’s total interactions to liberal-leaning pages that also frequently post video content. From March 2017 to March 2018, the total interactions on the Rachel Maddow Show page, went from 3.3 million to 1.6 million. Rachel Maddow hosts the most widely watched cable news show in America, and her page has 2.6 million fans to Diamond and Silk’s 1.2 million. Over the same time period, on the Facebook page of The Young Turks, perhaps the most popular independent provider of liberal videos online, total interactions declined from 2.3 million to 760,000. Meanwhile, interactions on Mic’s Facebook page, a left-leaning publisher with 3.8 million Facebook fans, plummeted from 8.9 million to 475,000.
Digging deeper into the data, if you isolate only the videos posted to Diamond and Silk’s page — excluding links and other kinds of status updates — their reach did go down. But the decline was still less pronounced than similar liberal-leaning pages.
Over the last year, views of original videos posted to Rachel Maddow’s Facebook page have declined from 6 million to 1.2 million. Diamond and Silk’s video views have declined from 4.1 million to 1.8 million.
In other words, Diamond and Silk videos now get more video views on Facebook than Rachel Maddow, even though Maddow’s show has a much larger page and is the most popular cable news program in the country.
A spokesperson for Facebook told ThinkProgress that the company regrets the way it communicated with Diamond and Silk, particularly the email in which they were told their content was “unsafe.” The Facebook spokesperson added that changes to Facebook’s monetization policies, implemented in September 2017, were not properly communicated to Diamond and Silk and may have added to the confusion.
Facebook’s spokesperson, however, categorically denied that any page, including Diamond and Silk, was targeted or penalized due to their political beliefs. Rather, any changes to their page performance over the last few months were not targeted at them, but the result of broader shifts across Facebook.
Indeed, many pages, including liberal pages, have suffered large declines because Facebook has reduced the distribution of videos and other content published by pages in favor of content from “friends and family.”
Diamond and Silk, however, have seen their total interactions increase slightly because the reach of their video content has more than replaced status updates that include links.
The data shows there is absolutely no case to be made that Facebook is censoring Diamond and Silk’s page. Their content is actually performing significantly better than providers of liberal political video. Yet their claims, made without any data, have been widely repeated: by members of Congress and the media alike.
It plays into a broader narrative that Facebook favors liberal media over conservatives. This, like the Diamond and Silk narrative, is false.
An analysis of the top 25 publishers features numerous right-wing outlets, including Fox News, the New York Post, and Breitbart. It also includes far-right publishers, like WesternJournal.com, that have little presence outside of Facebook. A look at the reporters who generate the most engagement on Facebook found that 5 of the top 12 work for the far-right Daily Wire.