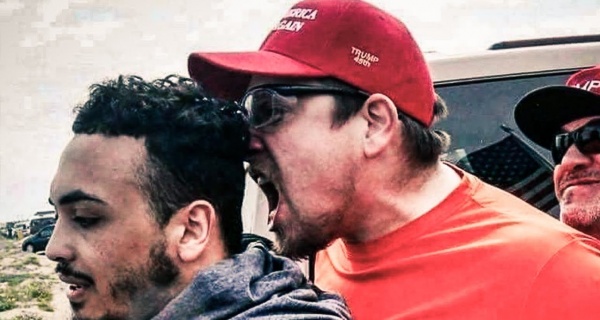 If you still think this is just a fight between left and right, you’re not keeping up. It hasn’t been for a long time if it ever was. It’s patriotic Americans defending the country against a cult that has gotten way out of hand in large part because we treated it as just another battle between left and right.

To pretend that it’s left vs. right enables the cult. That’s what it would have us believe. It’s how they keep their cult members enthralled. Every time we fight for leftist causes, it bolsters their sense that their cultish mission is imperative.

Trump ­­– this cult’s current craven, graven-image demigod panders, however, he can, often with as much lip service to traditional leftist causes as right-wing ones. Freedom, liberty, looking out for the downtrodden and small businesses, draining the swamp, healthcare that will “take care of everybody,” local autonomy and even making America great again. He panders with right-wing causes too, white supremacy, Evangelicalism, deregulation, non-intervention.

If we’re whipsawed by the cult’s pandering, we miss its point – pandering by whatever means that keep cult followers faithful and hopeful.

A large portion of the cult’s members are otherwise honest decent people who know that Trump is a terrible person. Some believe his pandering; others recognize that it’s just pandering but they admire him for being open about it. They’re prone to mistake honesty about one’s unrealistic opinions for realism, which is like saying someone is realistic because he speaks his mind when declaring that we should all move to the moon because it’s made of green cheese.

Those of us on the left who remain vigilant aren’t taken in by Trump’s pandering but we pay most attention to his hard swing to the right. It would be easy for us to ignore the central point:

This is a cult, a mass sociopathy, otherwise decent Americans failing in their patriotic duty to defend the country from the inside or out against cults of personality. Instead, they have fallen for the cult of personality but not just for Trump’s personality, for the way joining a cult revitalizes their confidence in their own personalities.

They have discovered a way to escape Jeffersonian self-doubt. They play god themselves, crusader’s for their cult. Out of frustration, desperation and/or ignorance, they have escaped into a fantasy that about, politics and morality they are infallible, invincible and unassailable, godlike, on God’s side, on Trump’s side.

For us, this suggests a crucial reframing. This is not so much a culture war as a war against cults in general, a patriotic defense against any cult’s tyranny, a cause all Americans should feel it is their patriotic duty to join.

We are not just leftists resisting the right’s assent. We are patriotic Americans of all persuasions opposed to all pandering cults, focused on this one for now because it’s gained so much ground, but as resistant to any cult should it swell like this.

We would oppose a pandering cult even if it were on our side. If there were a liberal or leftist Donald Trump, his pandering perfectly aligned with our heartfelt values, we would defend against him with as much vigor as we defend against the Trump cult. Opposition to cults is the definition of patriotism in America.

Now really, would we oppose a pandering cult after our own hearts? It’s a hypothetical assertion. Is it credible? If there were a cult dedicated to preventing further climate crisis and risk of nuclear escalation, would we actually resist it or is that just easy talk?

As leftists we would welcome powerful leadership on our side. Many of us wish we had just that, for example, that more liberal and leftist politicians were able to pierce the news cycle, making headlines with soundbites as sharp as those on relentless cycle from the right.

But would we support a left-pandering cult? Perhaps some of us ­would – those most distressed by left-wing setbacks, those who just aren’t keeping up, and those who are lured into playing left-leaning gods (there are some in every crowd).

But most of us, no. We hear the tinny ping of pandering. We’ve seen it on the left plenty throughout history and even today. Venezuela fell to a left-wing cult leader. Mao and Ortega started as heartfelt leftist revolutionaries but soon became pandering cult leaders, dictators to replace the dictators they overthrew.

The majority of Americans would oppose cults attacking from any direction. The different flavors of pandering are beside the point. The sharpest among us recognize that.

All cults end up in the same place, detached from reality, followers led by the nose, lured in by that heady fantasy that they have achieved godlike political mastery, the lure that they too can enlist for last-word status as infallible, invincible and unassailable with godlike omniscience, omnipotence, and moral purity.

Democracies like ours die when cult leaders, so powerful they escape self-doubt control people so stressed they can’t afford self-doubt. Democracies have toppled to the left, right and in any direction, but always to cults, the powerful freed from doubt luring the helpless with dreams of absolute authority.

Cults have always been the treacherous unifier of the uber-rich and the profoundly poor – a cult’s appeal in desperate times, a way to reach up with one hand to grab some vague lofty idealism that justifies reaching down with the other hand to grab whatever they desperately need, people unwilling or unable to face reality yelling a proud “We deserve all!” instead of marshalling the patriotic fortitude to pull together.

America’s greatness has been its patriotic immune system, preventing cults from gaining dominance over its body politic. Like all states, we have our left-leaning and right-leaning populations. Still, together we have resisted and defended against and subdued cults for centuries.

Focusing on our unified resistance to cults from any culture, would align many more of us. It will align still more as the cult continues to bear its poison fruit.

Eyes on the prize: Thwarting all cults. When our eyes shift back to our leftist causes we may think that we’re forestalling normalization or digging in our heels on our eternal values but we’re actually enabling this cult. It wants us to believe that this is an existential battle against evil, dumb leftists but it isn’t. It’s civil defense against all cults because they all end up making us dumb, evil and no longer American.