Here Are Strange Statements Made By Trump Supporting Evangelical Extremist 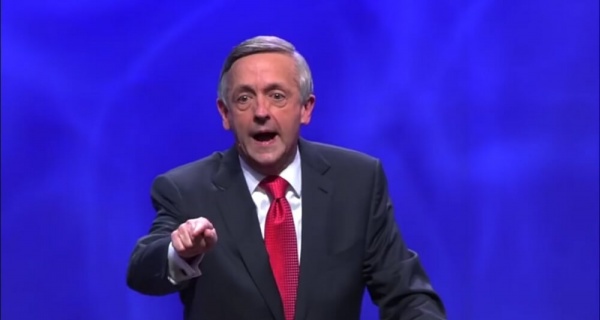 Right-wing evangelist Franklin Graham, son of the late Rev. Billy Graham, became the butt of jokes this week for warning, on July 25, that anyone who criticizes President Trump for allegedly cheating on his wives and paying hush money to porn star Stormy Daniels and Playboy model Karen McDougal risks facing the wrath of God. Graham even quoted scripture to explain why the media and fellow Christians needed to leave Trump alone. But in the Trump era, Graham is hardly the only right-wing Christian fundamentalist who has been making ridiculous statements. With Trump in office, the Christian Right is feeling empowered—and with that empowerment has come other comments that are as laughable as Graham’s.

Here are four other Christian fundamentalists who have been making ludicrous statements in the Trump era.

James Dobson, founder of Focus on the Family, has made a career out of railing against gays, feminists, Muslims and many others he hates. But Dobson is a strong supporter of Trump, and in 2018, he has stressed that it is the duty of Christians to pray and fast in order to keep the forces of darkness from impeaching the president. According to Dobson, “The Lord played a role in the election of Donald Trump… It seemed evident on Election Night that the Lord gave us victory. So Lord, if that is true, we ask you to protect our president from anything that could hurt him.”

When President Bill Clinton had an extramarital affair with intern Monica Lewinsky in the 1990s, the Christian Right declared that he was unfit for the presidency. But Robert Jeffress, pastor of the First Baptist Church in Dallas, is much more forgiving where Trump is concerned. In March, he asserted that even if Trump did have an affair with Daniels and paid her hush money to keep quiet, evangelicals were obligated to stick by him. According to Jeffress, “Evangelicals still believe in the commandment: thou shalt not have sex with a porn star. However, whether this president violated that commandment or not is totally irrelevant to our support of him.”

Far-right evangelist Scott Lively, who is so bitterly anti-gay that he could give the Westboro Baptist Church a run for its money, decided to run against Republican Gov. Charlie Baker in Massachusetts’ 2018 GOP gubernatorial primary. As Lively sees it, Baker is a closet liberal who isn’t sufficiently pro-Trump—and he is falsely taking credit for both the resurgence of Christian values and the economic recovery Trump has single-handedly brought about. “I’m telling you,” Lively declared during a speech in April, “there is only one man in this nation that’s responsible for the economic miracle that we’ve experienced since the election of 2016. That’s our president, Donald Trump. You did not do that, Charlie Baker. That’s stolen valor.”

Tony Perkins, head of the Family Research Council, has been among Trump’s outspoken evangelical supporters—and when allegations that Trump paid hush money to Daniels surfaced, Perkins explained why evangelicals were giving him a “mulligan.” Those pastors, according to Perkins, “were tired of being kicked around by Barack Obama and his leftists, and I think they are finally glad that there’s somebody on the playground that is willing to punch the bully.” Problem: Obama, unlike Trump, actually has a long history of attending church, while Trump has led a very secular life. But in Perkins’ confused mind, Trump is saving America from the wave of anti-Christian oppression brought about by Obama’s presidency.