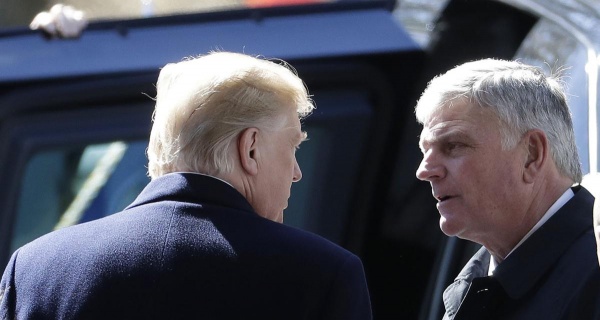 Evangelical leader Franklin Graham won’t criticize President Donald Trump for authorizing the possibly illegal payoff of his mistress just before Election Day — and he doesn’t think anyone else should, either.

Graham continued his double standard for Trump after his former attorney released a recording of them discussing a hush money payout to former Playboy model Karen McDougal.

“Everyone in the media is talking about the just-released tape & what the President said or didn’t say, what he meant or didn’t mean,” Graham tweeted. “It is a good moment to point out that everyone should realize that every word that is spoken or thought is recorded by God.”

The evangelical pastor warned the president’s critics that their dark deeds must one day become public.

“Here’s a sober warning from God’s Word, ‘What you have said in the dark will be heard in the daylight, & what you have whispered in the ear in the inner rooms will be proclaimed from the roofs’ (Luke 12:3),” Graham tweeted.

“The Bible says it is appointed unto man once to die & then the judgment,” he tweeted. “We won’t be judged by media spin masters or forensic audio analysts, but you will be judged by truth & righteousness—by God Himself. Have you ever thought about what His verdict will be on your words?”