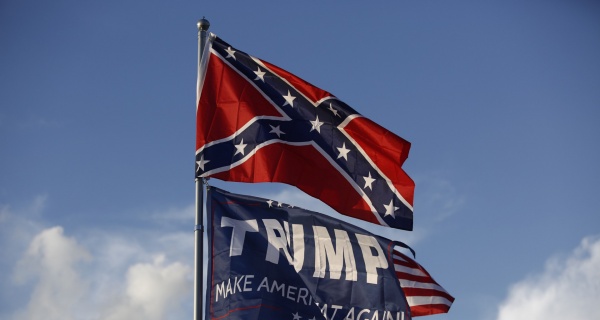 The League of The South launched a Russian language page on its website to share ideas, one day after the controversial Trump – Putin summit, Newsweek reported.

“We understand that the Russian people and Southerners are natural allies in blood, culture, and religion,” a letter addressed to “our Russian friends” from the league’s president Michael Hill stated.

“As fellow Whites of northern European extraction, we come from the same general gene pool. As inheritors of the European cultural tradition, we share similar values, customs, and ways of life. And as Christians, we worship the same Lord and Savior, Jesus Christ, and our common faith binds us as brothers and sisters,” Hill’s letter continued.

Trump came under an avalanche of criticism, even from a few members of his own party, for siding with Russia over the American intelligence community, which unanimously agreed that Putin authorized Russia’s cyber interference with the 2016 U.S. presidential election.

The “Southern nationalist organization,” which claims to have chapters in 16 states, urged their Russian counterparts to “take advantage of the climate of increasing trust and friendship between us.”

There’s a chance that Russian hate groups could accept the offer from their American comrades, if history is an indicator. After World War II, the first significant ties between hate groups in the U.S. and Soviet Union emerged, despite the Cold War, according to ThinkProgress. KGB operatives also recruited white supremacists in the U.S. to deface synagogues and Jewish cemeteries in New York and Washington in the 1970s. And in the age of Trump, far-right causes have been targeted for collaboration by entities with ties to Moscow.